Welcome to the WorldGenWeb Project 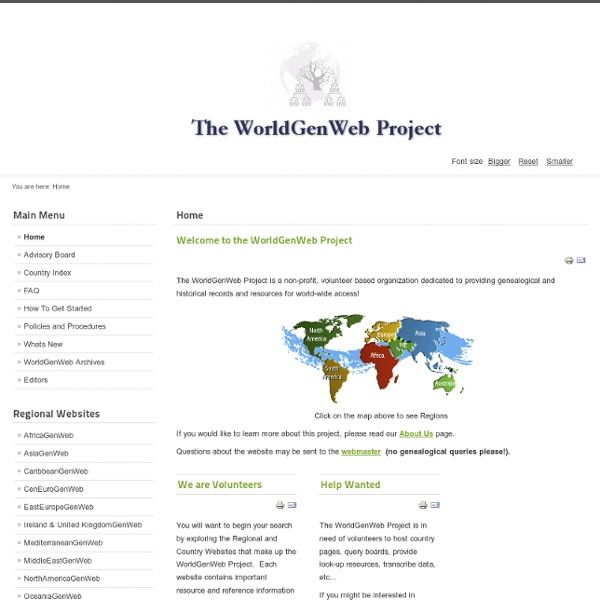 Ancestor Hunt - Free Genealogy Search Engines Online Resources and Genealogical Tools to Find Your Roots Online databases make it easier than ever to trace your own family history, and DNA testing allows for the type of deep research conducted for Finding Your Roots with Henry Louis Gates, Jr. These links can help you get started. Trace Your Family History 23andMe Offers DNA testing and resources to learn ancestry and personal health information 248 Ancestors Dedicated to the research and discovery of Jewish ancestors African Ancestry Offers DNA testing with a focus on tracing the ancestry of people of African descent back to the present-day African country of origin DNA Heritage Information on DNA genealogy Ellis Island Search for relatives who may have come through Ellis Island FamilySearch Provides resources and is tied to real-world family history classes and Family History Centers around the world Family Tree DNA Offers DNA testing for the purpose of determining ancestral pedigrees Family Tree Maker Social network-oriented family tree sharing site Interment Cemetery records online

Genealogy Browsing subject area: Genealogy (Include extended shelves) Help with reading books -- Report a bad link -- Suggest a new listing Home -- Search -- New Listings -- Authors -- Titles -- Subjects -- Serials Books -- News -- Features -- Archives -- The Inside Story Edited by John Mark Ockerbloom (onlinebooks@pobox.upenn.edu)OBP copyright and licenses. Tracing Your Ancestry Advances in DNA testing are allowing people to uncover information about their genetic ancestry and find out where some of their ancestors came from. As an African American, I don’t know where my African ancestors originated from. The only geographic location I can point to as my ancestral home is Tennessee. But before I fork over more than $200 for such a test, the skeptic in me needs some answers. Companies that offer genetic testing services for finding out about ancestry use several different testing methods. Taking these tests is straightforward. “Lineage testing can trace your ancestry back to real existing people who carried that particular DNA type throughout prehistory until today,” explains Peter Forster, a geneticist at the University of Cambridge in the U.K. and cofounder of Roots for Real, a company in Cambridge that uses mitochondrial DNA tests to determine maternal ancestry. But these methods have a drawback. Another strategy for ancestry tracking is admixture testing.

Castle Garden Home - DNA Ancestry Project 101 Ways to Research Your Family Tree for Free | Domesticfix Is free genealogy a thing of the past? With the constant addition of subscription genealogy databases on the Internet, people often wonder if there will soon be an end to free genealogy research via the Web. For those of you with this concern, take heart – free genealogy databases aren’t going anywhere anytime soon. Web sites from all over the world contain free genealogy information of use to family tree researchers which has been contributed by individuals, companies and even governments. 1. 2. 3. 4. 5. 6. 7. 8. 9. 10. 11. 12. 13. 1901 Census for England & Wales Search for free in this comprehensive name index to over 32 million individuals who lived in England and Wales in 1901. 14. 15. 16. 17. 18. 19. 20. 21. 22. inGeneas Database Free searchable databases containing 50,000+ Canadian passenger and immigration records (c1750 to 1900) including the only electronic version of the free National Archives of Canada Miscellaneous Immigration Index. 23. 24. 25. 26. 27. 28. 29. 30. 31. 32.

DNA solves mysteries of ancient Ireland She’s a brown-eyed, brown-haired woman, with a face that would be right at home in the Mediterranean or the Middle East. And she’s Irish. She lived about 5200 years ago, and was buried near a stone monument and an ancient ring-shaped earthwork, in Ballynahatty, near Belfast. It was her people who built nearly all those megalithic tombs, monuments and stone circles, that you see in advertisements from the Irish tourism industry. And it’s now being suggested that nearly everyone in Ireland at that time looked like Maria, like they were from the Mediterranean. And that’s because they were. The genetic profile of these first Irish farmers indisputably originates in the Middle East. Maria lived a stone-age existence. Her ancestors may have taken a few centuries to complete the journey from the Middle East to the cold and foggy forests of northern Ireland. Maria’s DNA has traces of an even older first people in Ireland, people who relied on hunting and gathering for food.

Review of the Top 40+ FREE Online Genealogy Websites Where You Can Start Your Ancestry Search « Obituarieshelp.org/Blog (Update: September 26, 2011: To celebrate the two year anniversary of this post, we have added 40 more free links to a new updated post. Now there are 82 free genealogy resources that you can use right now to start your searching your family history. Check the new post out here.) There are a million websites that have information about genealogy, census records, and family tree research. Some are free and some expect you to pay a membership fee. When you are just starting your family tree research or when you are a little strapped for cash and don’t want to make an investment for something that might just be a hobby, there are alternatives to subscription genealogy websites. Don’t sign up for a subscription genealogy website just yet, get your ancestry search started at these resources first. Here are the best free genealogy websites where you can get some good solid information about your family tree, ancestors and get your genealogy research off on a running start. 1. 2. 3. 4. 5. 6.

"Great Surprise"—Native Americans Have West Eurasian Origins Nearly one-third of Native American genes come from west Eurasian people linked to the Middle East and Europe, rather than entirely from East Asians as previously thought, according to a newly sequenced genome. Based on the arm bone of a 24,000-year-old Siberian youth, the research could uncover new origins for America's indigenous peoples, as well as stir up fresh debate on Native American identities, experts say. The study authors believe the new study could also help resolve some long-standing puzzles on the peopling of the New World, which include genetic oddities and archaeological inconsistencies. (Explore an atlas of the human journey.) "These results were a great surprise to us," said study co-author and ancient-DNA specialist Eske Willerslev, of the University of Copenhagen, Denmark. "I hadn't expected anything like this. A second individual genome sequenced from material found at the site and dated to 17,000 years ago revealed a similar genetic structure.

101 Ways to Research Your Family Tree for Free Is free genealogy a thing of the past? With the constant addition of subscription genealogy databases on the Internet, people often wonder if there will soon be an end to free genealogy research via the Web. For those of you with this concern, take heart - free genealogy databases aren't going anywhere anytime soon. Web sites from all over the world contain free genealogy information of use to family tree researchers which has been contributed by individuals, companies and even governments. Birth records, marriage records, military records, ships passenger lists, surnames, census records, immigration records, wills, photos and much, much more are available on the Internet for FREE if you just know where to look. These 100 free genealogy sites, in no particular order, should keep you busy searching for weeks! 1. 2. 3. 4. 5. Next Page > Free Genealogy Sites (6-10)

DNA from ancient Phoenician stuns scientists A study of the first DNA obtained from an ancient Phoenician reveals that the man had European ancestry. The research team, which was co-led by Professor Lisa Matisoo-Smith of the University of Otago in New Zealand, sequenced the first complete mitochondrial genome of 2,500-year-old Phoenician buried in North Africa. Experts studied a man dubbed the “Young Man of Byrsa” or “Ariche,” whose remains were taken from a sarcophagus in the ancient city of Carthage, just outside Tunis, the Tunisian capital. Analysis shows that the man belonged to a rare European haplogroup – a genetic group with a common ancestor – indicating that his maternal ancestry is linked to locations on the North Mediterranean coast, probably on the Iberian Peninsula. Related: Archaeologists think they've found Aristotle's tomb The findings offer the earliest evidence of the European mitochondrial haplogroup U5b2c1 in North Africa, according to Matisoo-Smith, dating its arrival to at least the late sixth century B.C.