Building a Model of a Sustainable City. Masdar City will host the headquarters of the International Renewable Energy Agency (IRENA).[6][7] The city is designed to be a hub for cleantech companies. 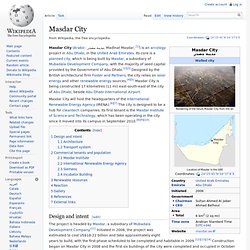 Its first tenant is the Masdar Institute of Science and Technology, which has been operating in the city since it moved into its campus in September 2010.[8][9][10] Design and intent[edit] The project is headed by Masdar, a subsidiary of Mubadala Development Company.[11] Initiated in 2006, the project was estimated to cost US$18-22 billion and take approximately eight years to build, with the first phase scheduled to be completed and habitable in 2009.[12][13][14] Construction began on Masdar City in 2008 and the first six buildings of the city were completed and occupied in October 2010. However, due to the impact of the global financial crisis, Phase 1 of the city, the initial 1,000,000 square metres (0.39 sq mi), will be completed in 2015. Architecture[edit] Masdar City has terracotta walls decorated with arabesque patterns. [edit] Building a Solar Panel. Several years ago I bought some remote property in Arizona. 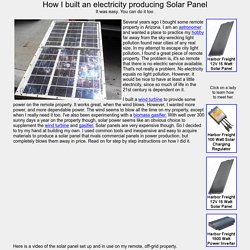 I am an astronomer and wanted a place to practice my hobby far away from the sky-wrecking light pollution found near cities of any real size. In my attempt to escape city light pollution, I found a great piece of remote property. The problem is, it's so remote that there is no electric service available. That's not really a problem.

No electricity equals no light pollution. I built a wind turbine to provide some power on the remote property. Here is a video of the solar panel set up and in use on my remote, off-grid property. Let me state up front that I probably won't be able to help you out much if you decide to build your own solar panel(s). So what is a solar panel anyway? I started out the way I start every project, by Googling for information on home-built solar panels. After a while, I came to some conclusions: <a href=' target='_blank'>Ebay. I bought a couple of bricks of 3 X 6 mono-crystalline solar cells. Wind Turbines (Caltech) Biomimicry Published on July 14th, 2011 | by Andrew July 14th, 2011 by Andrew Researchers at CalTech have found a way to increase the power output of wind farms at least 10x simply by optimizing the placement of wind turbines in a farm to “maximize its energy collecting efficiency at heights closer to the ground.” 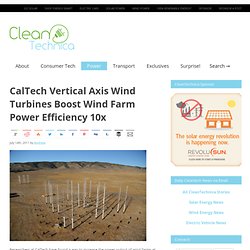 Besides significantly enhancing the economics of wind farms, the design approach would also significantly reduce land use requirements, environmental impacts and threats to flying wildlife. Inspired by the movement of schooling fish and the much noted inefficiencies inherent in wind turbines generally speaking, CalTech’s research team, led by John Dabiri, has been testing its theory at the Field Laboratory for Optimized Wind Energy (FLOWE), an experimental wind farm in the California desert. “The global wind power available 30 feet off the ground is greater than the world’s electricity usage, several times over,” Dabiri was quoted as saying in this Physorg news report. 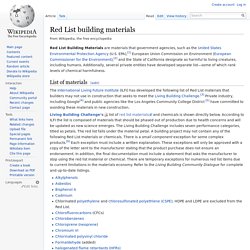 EPA),[1] European Union Commission on Environment (European Commissioner for the Environment),[2] and the State of California designate as harmful to living creatures, including humans. Additionally, several private entities have developed separate list—some of which rank levels of chemical harmfulness. List of materials[edit] The International Living Future Institute (ILFI) has developed the following list of Red List materials that builders may not use in construction that seeks to meet the Living Building Challenge.[3] Private industry, including Google[4] and public agencies like the Los Angeles Community College District [5] have committed to avoiding these materials in new construction.

Living Building Challenge’s list of red list materials and chemicals is shown directly below. References[edit] External links[edit] How to Build a Rain Garden.