World Bank, IMF worry on Africa rising debt to China, AfDB — Quartz Africa. African debt is on the rise, and that fact is causing tensions to spark in unexpected places. 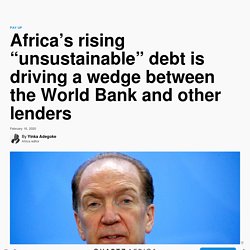 Total external debt for sub-Saharan Africa jumped nearly 150% to $583 billion in 2018 from $236 billion 10 years earlier, according to World Bank data. Many now worry the debt load is becoming unsustainable as the average public debt increased from 2010-2018 by 40% to 59% of GDP. It’s a problem across the low-income developing world but is particularly acute in the subregion, where the fast-growing debt accumulation has outpaced other developing areas. Treacherous Antarctic Waters Open Up, Just Briefly. Welcome to the Climate Fwd: newsletter. 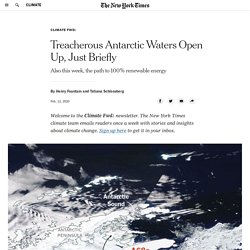 The New York Times climate team emails readers once a week with stories and insights about climate change. Sign up here to get it in your inbox. Since then the iceberg, now known as A68a following a naming convention established by the National Ice Center, has been drifting slowly northward in the Weddell Sea, along the eastern side of the peninsula. In two and a half years, A68a hasn’t been up to much. But recently it appears to have made some Antarctic tourists, including me, very happy. Dramatic images show ice-less region of Antarctica following record-high temperatures. Images out of a northern region of Antarctica show a landscape nearly devoid of ice and snow after record-setting temperatures last week. 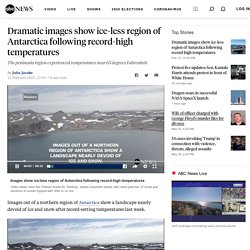 Video taken near in the Chilean Antarctic Territory, on the continent's peninsula, show mountain bases with mere patches of snow and sections of ocean topped with little to no ice. On Thursday, the Esperanza Base, a year-round Argentine research center on the northern tip of the Antarctic peninsula, recorded a temperature of 18.3 degrees Celsius -- nearly 65 degrees Fahrenheit, according to Argentina's national meteorological service. The previous record was set in the same location in March 2015 at 17.5 degrees C, or 63.5 degrees F. Such high temperatures used to occur every 1,000 years and then every 100 years, Ricardo Jana, glacier scientists for the Chilean Antarctic Institute, told Reuters.

World’s largest linguistics database is getting too expensive for some researchers. It was 2015 when Gary Simons knew that something had to change. 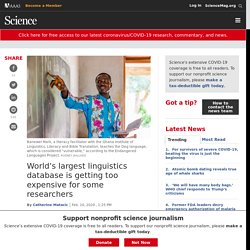 Temperatures at a Florida-Size Glacier in Antarctica Alarm Scientists. Scientists in Antarctica have recorded, for the first time, unusually warm water beneath a glacier the size of Florida that is already melting and contributing to a rise in sea levels. 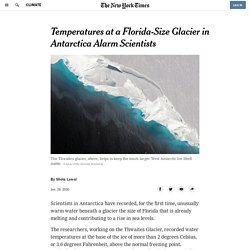 The researchers, working on the Thwaites Glacier, recorded water temperatures at the base of the ice of more than 2 degrees Celsius, or 3.6 degrees Fahrenheit, above the normal freezing point. Critically, the measurements were taken at the glacier’s grounding line, the area where it transitions from resting wholly on bedrock to spreading out on the sea as ice shelves. It is unclear how fast the glacier is deteriorating: Studies have forecast its total collapse in a century and also in a few decades.

Scientists Say We Need These 6 Things For Us to Meet Our Climate Goals. Our planet is in a tight spot. 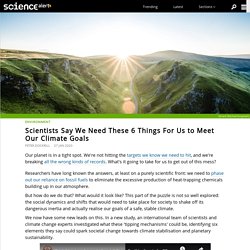 We're not hitting the targets we know we need to hit, and we're breaking all the wrong kinds of records. What's it going to take for us to get out of this mess? Researchers have long known the answers, at least on a purely scientific front: we need to phase out our reliance on fossil fuels to eliminate the excessive production of heat-trapping chemicals building up in our atmosphere. But how do we do that? What would it look like? We now have some new leads on this. Working at the Pole. Living and working in Antarctica. 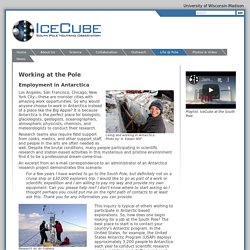 Photo by: H. Kaiser/ NSF Los Angeles, San Francisco, Chicago, New York City—these are monster cities with amazing work opportunities. So why would anyone choose to work in Antarctica instead of a place like the Big Apple? ESRL Global Monitoring Division - South Pole Observatory. The South Pole Observatory (SPO) is located at the geographic South Pole on the Antarctic plateau at an elevation of 2837 m above sea level. 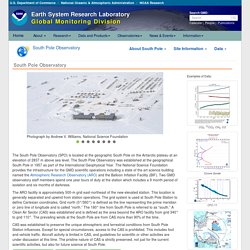 The South Pole Observatory was established at the geographical South Pole in 1957 as part of the International Geophysical Year. The National Science Foundation provides the infrastructure for the GMD scientific operations including a state of the art science building named the Atmospheric Research Observatory (ARO) and the Balloon Inflation Facility (BIF). How biology creates networks that are cheap, robust, and efficient. From veins that deliver oxygen to tissues to xylem that send water into stems and leaves, vascular networks are a crucial component of life. 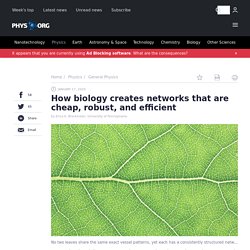 In biology, there is a wide range of unique patterns, like the individualized structures found on leaves, along with many conserved structures, such as named arteries and veins in the human body. These two observations led scientists to think that vascular networks evolved from a common design, but how, exactly, could nature create so many complex structures from a single starting point? A new study shows how a wide variety of vascular networks can be created by changing only a small number of a network's attributes. Pacific Ocean’s Warm “Blob” Killed a Million Seabirds in One Year. Attack of the Blob In 2013, scientists detected a large patch of water in the Pacific Ocean that was warmer than it should’ve been based on its location and the time of year. 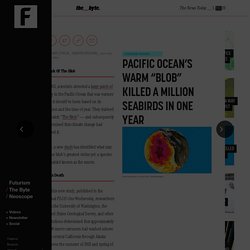 They dubbed the patch “The Blob” — and subsequently determined that climate change had caused it. Now, a new study has identified what may be the blob’s greatest victim yet: a species of seabird known as the murre. Mass Death For this new study, published in the journal PLOS One Wednesday, researchers from the University of Washington, the United States Geological Survey, and other institutions determined that approximately 62,000 murre carcasses had washed ashore from central California through Alaska between the summer of 2015 and spring of 2016. What Is the Greenhouse Effect? Earth is said to be in a perfect "Goldilocks zone" away from the sun (not too cold, and not too hot), which enables life to thrive on the planet's surface. But Earth's balmy temperatures would not be possible without the greenhouse effect, which traps solar energy on Earth's surface and keeps the planet warm.

The greenhouse effect arises from Earth's atmosphere. Visible light from the sun, as well as invisible ultraviolet and infrared wavelengths, can penetrate the gaseous layer that blankets our world. The Revival of Ancient Lost Crops Reveals Surprising Results. The scientific cultivation of lost ancient seed crops has yielded much higher than expected growth rates, challenging assumptions about maize (corn) growth in prehistoric North America .

According to new research ‘lost crops’ might have fed as many people in prehistoric North America as traditionally grown maize. But the study was not without challenges as no written or oral histories exist about these lost crops, and the more modern domesticated forms are now extinct. Natalie Mueller is assistant professor of archaeology in Arts & Sciences at Washington University in St. Louis, and writing in the Journal of Ethnobiology she describes how “painstakingly” she calculated yield estimates for two annual plants that were cultivated in eastern North America for thousands of years before being abandoned for maize production. Wind conditions influence water circulation and carbon dioxide concentrations in the Southern Ocean. The sea encircling Antarctica acts as a huge mixer for water from all the ocean basins—and this circulating pattern influences the exchange of carbon dioxide (CO2) between the ocean and the atmosphere.

A study by an international team of researchers led by Dr. Our Acidic Oceans Are Eating Away at Sharks’ Skin. I’m Melting As the oceans grow increasingly acidic, they’re claiming yet another casualty: sharks. New research shows that the acidic water, a byproduct of human-induced climate change, is damaging and destroying the tiny scales on sharks’ skin, according to Newsweek. World’s oldest fossil trees discovered in New York. Fossilized trees dating back 386 million years have been discovered at an abandoned quarry in New York.

Scientists believe they've found a forest so gigantic that it once stretched beyond Pennsylvania from the quarry in Cairo, New York -- nestled in the foothills of the Catskill Mountains. The finding could increase our understanding of the evolution of trees and how they remove carbon dioxide from the atmosphere. World's oldest forest discovered in upstate New York. Scientists have unearthed evidence in New York of the world’s oldest forest, dating back nearly 400 million years. Yale School of Forestry & Environmental Studies. Algal blooms are getting worse in many lakes worldwide. Water laden with algae on the shores of Pelee Island, Lake Erie, in 2009. Image via Tom Archer. Algal. Algae. Photosynthetic eukaryotic organisms. Can Algae Deal With Ocean Acidification? Living with algal blooms: How one Michigan town manages its water.

pH of Water - Environmental Measurement Systems. What is pH? pH is a determined value based on a defined scale, similar to temperature. Toxic Algae Is Ruining Our Lakes. The Solution: Beer. Autonomous drones to lead the way in mining surveillance technology — report - MINING.COM. Miners are expected to continue using autonomous drone technology as a complement to new IOT solutions to improve mine operation efficiency and worker safety, a new industry trend analysis by Fitch Solutions finds. I Have to Tell You Something Very Important About Honeybees.

SCiO: This Unbelievable Device Will Change The Way We Interact With The World. Site Web indisponible. 13 Cheap DIY Greenhouse Plans. This Message Has The Power To Change The World. 10 Reasons Why EarthShips Are F!#%ing Awesome. AFGRI - Home.