Is it important to be green?

Is it important to be green? 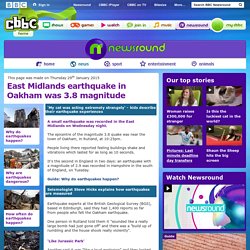 </strong> Media requires JavaScript to play. </p></div> 'My cat was acting extremely strangely' - kids describe their earthquake experiences A small earthquake was recorded in the East Midlands on Wednesday night. The epicentre of the magnitude 3.8 quake was near the town of Oakham, in Rutland, at 10:25pm. People living there reported feeling buildings shake and vibrations which lasted for as long as 10 seconds. It's the second in England in two days: an earthquake with a magnitude of 2.9 was recorded in Hampshire in the south of England, on Tuesday. Guide: Why do earthquakes happen? <div class="warning"><img class="holding" src=" alt="Steve Hicks and Ayshah Tull" /><p><strong>Please turn on JavaScript. Seismologist Steve Hicks explains how earthquakes are measured. 50 Ways to Help the Planet. Charles Darwin & Evolution.

Evolution is the slow process that changes animals and plants and it’s a great piece of science! 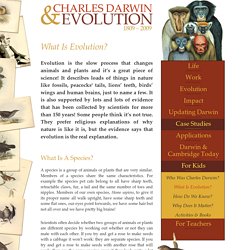 It describes loads of things in nature like fossils, peacocks' tails, lions’ teeth, birds’ wings and human brains, just to name a few. It is also supported by lots and lots of evidence that has been collected by scientists for more than 150 years! Some people think it’s not true. They prefer religious explanations of why nature is like it is, but the evidence says that evolution is the real explanation. what is a species?

A species is a group of animals or plants that are very similar. Scientists often decide whether two groups of animals or plants are different species by working out whether or not they can mate with each other. Of course you can’t go around trying to force lots of animals and plants to mate with each other! How do species evolve? All species are related to each other. So what makes all the species different? What about us? Written by Stephen Montgomery. Time Zones & How They Work.

Adaptation Index. Animals and plants are adapted to the conditions of the habitats in which they live. 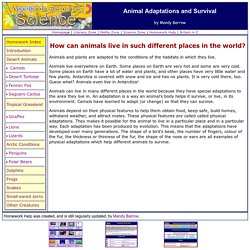 Animals live everywhere on Earth. Some places on Earth are very hot and some are very cold. Some places on Earth have a lot of water and plants, and other places have very little water and few plants. Antarctica is covered with snow and ice and has no plants. It is very cold there, too. Animals can live in many different places in the world because they have special adaptations to the area they live in. Animals depend on their physical features to help them obtain food, keep safe, build homes, withstand weather, and attract mates.