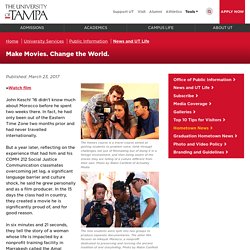 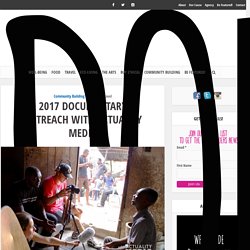 Each year Actuality Media chooses new locations and new changemakers to work with. In 2017, Documentary Outreaches programs are scheduled for Nepal, Peru, Nicaragua and Morocco. Actuality Media, a social enterprise, was started with the idea of telling the world about awesome, inspiring stories that would otherwise be unknown, and to push new documentary filmmakers in the direction of telling powerful, positive stories that can change the world. Documentary Outreaches are run as study abroad programs. The team finds changemakers who are both deserving of attention and who can benefit from being the subject of a short documentary telling their story. The films are distributed online, submitted to festivals and sometimes shown on TV. 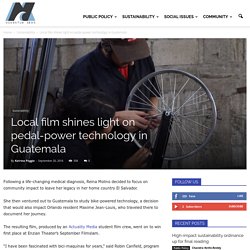 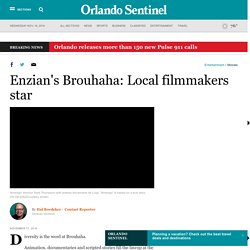 Animation, documentaries and scripted stories fill the lineup at the 25th Annual Brouhaha Film & Video Showcase. Fifty-nine shorts make up four programs at the Saturday and Sunday festival at the Enzian in Maitland. Brouhaha celebrates local filmmakers, especially those at schools. There are 17 movies from Florida State University, eight from the University of Central Florida, five apiece from Trinity Preparatory School and Full Sail University and three each from Winter Park High School and Daytona State College.

Episode 22 - Kate McCallum by All the Write Stuff. Documentary Films for Change with Actuality Media. Actuality Media is a study abroad organization that takes students and emerging professionals to developing communities around the world to create short documentary films about changemakers working to solve social or environmental issues. 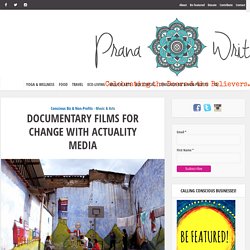 A crew on our 2013 Documentary Outreach to Kenya films on a street in Huruma, a slum in Nairobi. Our work with students teaches them both the importance and potential impact of positive media, as well as to be better storytellers. We guide students through multi-week projects that result in short documentary films focused on real stories within the world of the changemakers being featured. A Director on the 2013 Media Impact Internship to Nicaragua sizes up a shot for her main documentary on a local bicycle-centered social enterprise. We do not make promotional videos, but rather find a character and tell a story with a true beginning, middle and end.

Luci's House — Livvy Runyon. There are some moments in life that come like dreams. 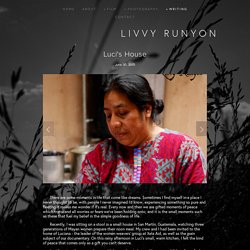 Sometimes I find myself in a place I never thought I'd be, with people I never imagined I'd know, experiencing something so pure and fleeting it makes me wonder if it's real. Every now and then we are gifted moments of peace which transcend all worries or fears we've been holding onto; and it is the small moments such as these that fuel my belief in the simple goodness of life. Recently, I was sitting on a stool in a small house in San Martín, Guatemala, watching three generations of Mayan women prepare their noon meal.

Guest Blogger- Robin Canfield. The Show Me Justice Film Festival is on April 7th and 8th at the University of Central Missouri in Warrensburg, Missouri. 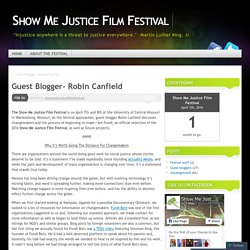 As the festival approaches, guest blogger Robin Canfield discusses changemakers and the process of beginning to make I Am Fundi, an official selection of the 2016 Show Me Justice Film Festival, as well as future projects. Why It’s Worth Going The Distance For Changemakers There are organizations around the world doing good work for social justice whose stories deserve to be told. Guest Blogger- Audrey Fancher. The Show Me Justice Film Festival is on April 7th and 8th at the University of Central Missouri in Warrensburg, Missouri. 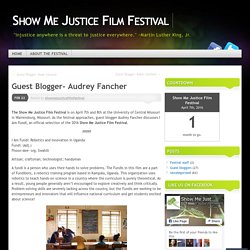 As the festival approaches, guest blogger Audrey Fancher discusses I Am Fundi, an official selection of the 2016 Show Me Justice Film Festival. Actuality Media by Bayleigh Janusik on Prezi. Pondering the Question of Ethical Photography - Pink Pangea: Travel Writing & Retreats for Women. Several months ago I was in Kampala, Uganda, watching three small kids excitedly race to the top of a small hill, running barefoot, wild and free. 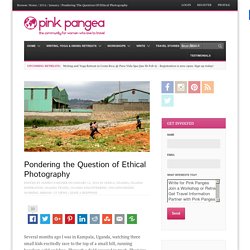 Through a field covered in trash. Their joy was apparent, but so were their circumstances. I wanted to remember that moment, so I quickly took this photo which ignited an internal dialogue that I’m still processing. Oregon Local News - Practicing art, showcasing change. Photography by Newberg native features cooperative in Guatemalan fishing village It’s great to have the opportunity to learn and practice an art form, but it’s even better when in doing so one can highlight something positive happening in the world. 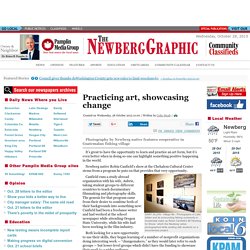 Newberg native Robin Canfield’s show at the Chehalem Cultural Center stems from a program he puts on that provides that very opportunity. I went to Ecuador and made a Documentary. Over the mid semester break I was accepted to participate in a documentary program through Actuality Media. Actuality Media´s motto is ´Make movies. Change the world´. They strive to implement change through media practices. On their website they say, ‘While learning the art and practice of documentary filmmaking, our crews tell stories about positive social or environmental progress happening in developing communities around the world.

By connecting media makers and change makers, we tell stories that matter.´ they work with NGO´s in a developing nation from Asia, Africa and South America. I chose Quito, Ecuador for my program. Actuality Media Outreach to Kisumu, Kenya. Before completing his MA last September, Sam Robbins spent several weeks in Kenya producing a documentary film with Actuality Media. From the email that began his journey, to an award nomination for the finished project, here’s his account of the outreach programme. In August 2014, I travelled to Kenya as part of the Actuality Media team. I’d been forwarded a link to their website by the MA staff, took a quick look at their page and pretty much decided right away that I wanted to do it.

I’d been stuck at home for a while; before enrolling on FTV the bulk of my time was spent earning money for its tuition, then once I was there staying at home saved me that bit more from accommodation fees. I’d already lived it up in my undergraduate days, so it seemed the sensible option with no student loan available. No surprise, living at home made me pretty restless though. Film, faces, and outback spaces: interview with alice stephens. Still from Stephens’ short film “Papillion”. Cinematographer and virtuoso Alice Stephens has a breadth of experience under her belt. At the ripe old age of 21 she has dabbled in analogue film, music videos, documentaries, short films and promotional videos. After a debut screening at Flickr Festival, Stephens has hit the ground running, turning her fervency for film into a nine-to-five gig. Co-founding production house Dalliance Media in 2012 has earned her some effusive praise (and a chance to avoid waiting on tables)! Ecuador - University of Tampa Study Abroad.

The University of Tampa - News - Documenting Life in Ecuador. Published: Jul 30, 2014 Christopher Boulton, assistant professor of communication, said, “I wanted my students to learn that it’s not just about making a documentary in a more scenic location.” VIDEO: Preview the Documentaries Lisa Aquilino ’15 wanted to study abroad before she graduated next spring. Nica Nuggets 12/2/13. 7PM diciembre 6 – vidagranada.com. Connect with your fellow Idealists! Photo credit: JD Hancock, Creative Commons/Flickr The Idealist community is a vibrant collection of individuals looking to make the world a better place.

We’re the staff and board members of multinational organizations and the weekend volunteers at small local charities; we’re social workers and development professionals; social entrepreneurs and students. We cover every issue, and we’re in every country. In this series, we’ll meet some members of Idealist who are out to do good in the world. You can get to any of their profiles by clicking on their picture. Heather James is a board member at the White Roof Project. Robin Canfield makes short documentaries on changemakers in the developing world. Good Profile – Aubrie Campbell (Actuality Media) « Good Generation.

Good Profiles feature members of our Good Generation who are either out there in the field doing interesting work or still in the trenches of schools and institutions waiting to make their mark on the world. Robin Canfield: Students Making Movies to Change the World. Only rarely does an electric light pierce the blackness of the pre-dawn hours in the slums of León, Nicaragua. No tourist there can tell you that, even though the slums sit just a 10 minutes' walk from the city center -- the homes made of torn tarps and cobbled-together wooden frames are a world away the comfort of home. The slum dwellers cross from their dirt and dust roads onto the cobblestone streets of León proper every morning to sell goods along the streets to sustain their meager living. On Location: Study Abroad Filmmaking for a Cause.

According to the Children’s Organization of Southeast Asia (COSA), the Thai government continues to deny that this issue exists, although it is seen as a common practice amongst hill tribes. University of Miami School of Communication - Communication Week 2011. An International Documentary Experience for Students. Expiration Date: August 26, 2012. UW Department of Communication : Jobs and Internship Postings. Christopher Llewellyn Reed @ Stevenson. What will happen to the Caribbean? To the Black people? « powertopanama.