The Academy of Art university 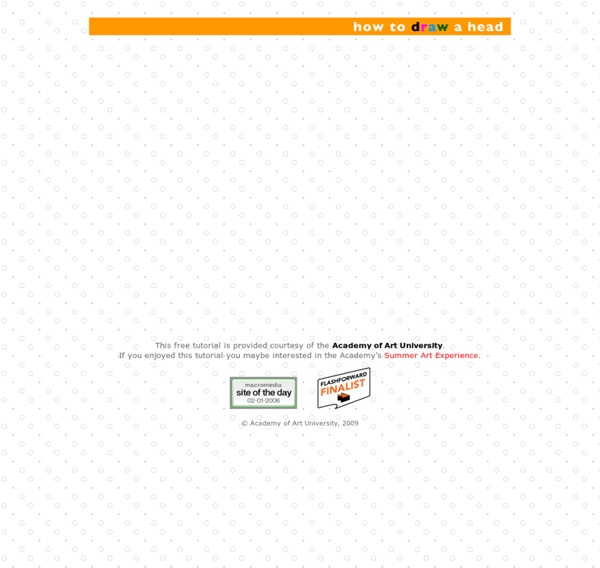 How to Draw the Head From Any Angle The Basic Forms To draw the head from any angle you must first understand its basic structure. Look past all the distracting details and visualize the underlying forms. This ability to simplify can be applied to the features of the face, but when starting the drawing you could look even further. Drawing Lessons In 1988, an extraordinary thing happened in the world of animation. The film "Who Framed Roger Rabbit?"( Directed by Robert Zemekis, animation directed by Richard Williams) was released. The film gleefully celebrated the kind of imaginative slapstick cartoon violence that was the staple of the most popular short cartoon classics that were made during the period from around 1940 till the decline in the year that the film takes place,1947. Cartoon lover's eyes popped like Tex Avery wolves all over the world for this caliber of animation hadn't been seen since...well, 1947. The film was a major hit, and a powerful shot in the arm for the until then sluggish animation business.

ART - The 1st Language: ART ONE Focus on Composition, Simple Depth, Color Mixing, Color Scheme 4 practice sheets including value scales and 3/D sphere on white and colored paper / colored fruit 3/D value using only Y. R. How to Draw a Portrait of the Head The most important part of a drawing is the start, not the finish. This tutorial will focus on how to start a portrait drawing, using basic blocking-in techniques. When drawing a portrait from life, you don’t want to just jump-in and draw. I always walk around the model to get a better understanding of the model and plan out my composition.

50 Clever Tutorials and Techniques on Traditional Drawing - Smashing Magazine Advertisement Traditional drawing is certainly way harder than digital and it is true that people are able to progress much faster digitally, but one should learn the traditional type of drawing and painting before starting digital drawing, since it often lays out the foundation for screen design. This article contains a mixture of traditional drawing tutorials, drawing techniques and some methods for transforming and preparing your creations for screen design. Some are intermediate level and some are advanced tutorials that include general theory, useful tips, comic inspired art, sketch a pencil drawing, coloring processing, character sketching, shapes, proportional, perspective and much more. We hope that drawing tutorials and techniques in this post will be a great help to you.

Create a Pencil Drawing of a Face In this demo, I create a charcoal pencil drawing a face. If you haven't drawn a face successfully already, you may want to brush up on basics of drawing a human head before working through this page. I always say that knowing how the human head is structured sets you more at ease when drawing people. The woman I will be drawing is turning away from us toward her right side. As this is to be a pencil drawing of a face, I won't cover anything beyond her head and neck. Drawing a human face is challenging enough, and I do not want to overwhelm you with more than that. 5 Ways to Make Art on the First Day of School The first few days of school can be tough. Students are still being dropped and added to your classes, making it difficult to teach content. Many of your students’ other classes are going over rules, procedures, and syllabi. Usually, when students get to class you can see the boredom coming from their faces. Sure, it’s important to go over rules and procedures, but does it have to be on the very first day of school? Instead of lecturing, why not teach those management skills by creating art?

How to draw the face - Portrait Art Tutorials, lessons on portrait art basics. This book is highly (and frequently) recommended on this site."The New Drawing on the Right Side of the Brain" by Betty Edwards shows how anyone can learn how to draw, even if they think they have no "talent." (If you are in the UK, look for this book on Amazon.co.uk.)