One Page Per Day: A web typewriter for authors. 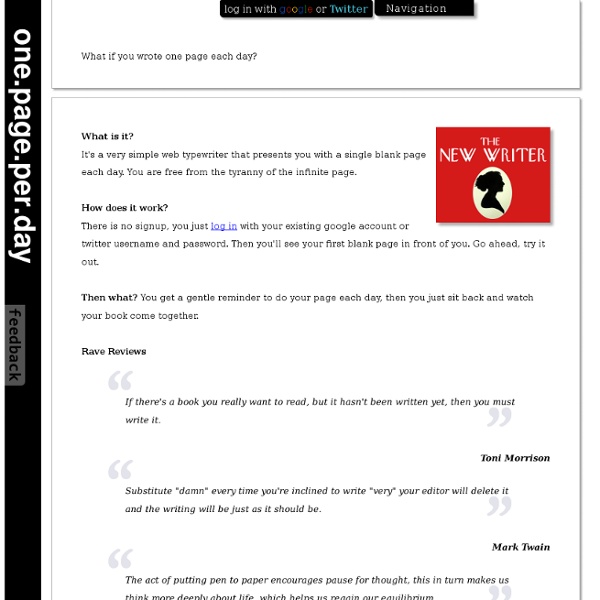 DarkCopy - Simple, full screen text editing How to Plot and Write a Novel: Plan Your Novel Writing with the Many novelists mull over story ideas, letting them ripen and develop over time. When the story is ready to be told, instead of just sitting down and starting to type, try the Snowflake Method. This step-by-step way to write a novel begins with essential elements and becomes more detailed with each step. Essential Elements for Novel Structure Snowflakes have a structure which begins with a simple form and adds more elements to create complex patterns. 1. 2. 3. The time-saving factor for novelists here is that at this point, a writer knows whether or not the story has problems. Expand on the Beginning Novel-Writing Steps 4. 5. 6. Plot problems will arise and new insights and ideas will appear through these steps. Revise and Expand into Scenes 7. 8. 9. 10. Ingermanson stresses that the Snowflake Method is not to be hurried. Not for All Writers Ingermanson's Snowflake Method will result in a well-planned, smoothly-plotted story for writers who prefer a plan.

Critical Intellectuals on Writing A fascinating look at how some of the world's most eminent scholars conceive of their own relationship with writing and with the work of being a critical intellectual. Writing is central to the work of all intellectuals, yet any given scholar's relationship to writing is a uniquely personal one. Gary A. Olson and Lynn Worsham bring together some of the world's leading scholars from a variety of disciplines to examine how they conceive of their own relationship to writing and to the work of being a critical intellectual. Using excerpts from interviews, originally published in JAC, each scholar's thoughts are revealed about writing habits, how writing relates to intellectual work, and the politics of intellectual work. “Because of its rich potential, I envision this collection as a powerful set of models for young academics and graduate students looking to understand what ‘academic writing’ is or looks like.” — College Literature Gary A.

About a little thing called 750 Words Archetype: The Fiction Writer's Guide to Psychology 21 Cool 3 Notes-Per-String Exercises to Rock On! Photo by Jsome1 Playing 3 notes per string exercises is something I do on a regular basis. I use them to warm up, to become a faster guitar player and to spice up my improvisation. 3 notes per string licks and scales are generally used for speed picking. If you practice these exercises properly and often enough you will increase your speed. The 3 notes per string exercises are played using the alternate picking technique. Once you get the hang of it, it can become quite addictive, but be careful though. The one and only reason why these monster guitar players become so incredibly fast is that they practice long hours for days, weeks, months and years.

Poetry Form - The Prose poem The Prose Poem Form by J. Zimmerman. History. Form. Craft guideline (Gary Young). Your Composition. Exercises. References. Do you feel constrained by line breaks? History. The King James Version of the Bible contains much that is prose poetry. Historically, the fable and the parable are genre prose poetry. In France the nineteenth century Baudelaire and Rambeau built on folk tales. Recently in the U.S.A., Louis Jenkins is praised for his prose poems, as is Gary Young. Form. Prose is the ordinary language that people use in speaking or writing. In a prose poem: The writing is continuous and without line breaks. Poet Gary Young has a very concise approach to prose poems. Use the spontaneity and drive of the sentence. Exercises. Begin with "Because" or "As we all know". Poet Gary Young suggested some writing exercises for prose poems during his October 2006 craft workshop: Write two sentences to describe a house by describing things that are missing. Your Composition. Free-write for a couple of pages.

5 Ways Not to Write a Novel Writing a novel? There's first-draft flow, and there's editing flow. And then there comes a time when you think you might be done, yet the manuscript is still not quite "there." To sell your work to an agent, and then to a publisher, and finally to a great many readers, put thoughts of flow aside now, and consider the following advice. , such as "Danielle was a woman of medium height with brown hair and brown eyes." , such as: "He shaved, and then he wiped off the shaving cream," "She walked to the corner, and she looked both ways," or "We opened the door, and we found the mail on the porch." . such as the following: the difficult task, both share, blend together, on account of, considering the fact that, report back. [Better: Add some tension, impending tension, or trouble to every page. * Did you miss my post about the sometimes unpolished writing of Stephen King ? * Or the one about best writers' resolutions ? Copyright (c) Susan K.

Twelve of the best new novelists The growth of British literary fiction has been one of the most extraordinary publishing phenomena of recent decades. Not everyone has been pleased. The label "literary fiction" is often used disparagingly, as if "literary" were synonymous with "pretentious" or "plot-free". "The two most depressing words in the English language are 'literary fiction'," declared David Hare recently in this newspaper. Some like to say that there is no such thing: there are only good novels and bad novels. I was recently asked by BBC2's The Culture Show to chair a panel of five judges in an effort to identify promising debut novelists. What is literary fiction? People have been talking of "literary fiction" (a phrase still unrecognised by the Oxford English Dictionary) since the 1960s, but it was in the early 80s that it became established. The key date was 1981, when Salman Rushdie's Midnight's Children won the Booker prize. As a marketing exercise, it worked. She knew what was required of her.

Vietnam inspired Camilla Gibb&#039;s new novel, gave her a chance to &#039;pay it forward&#039; Oops! We can’t find the page you’re looking for. Sorry about that. The possible reasons why you’ve landing at this page are: We have a "bad" link on our site. Your options: Try again and re–type the url in the address bar above. 10 Creative Block Breakers That Actually Work Doesn't matter what you call it: writer's block or creative block or simply "Where is my inspiration when I need it?!" All creative individuals find their work coming less easily at some times than others. That's when you need strategies, and plenty of them. There are at least 90 such tips, tools, and techniques in , edited by Alex Cornell, with a foreword by Erik Spiekermann. is a fresh compilation of practical, real world solutions offered by a range of creative individuals, including graphic designers, artists, writers, and photographers. The insights in this perkily designed, light-hearted, and useful little volume are sometimes amusing, often unexpected. to find it more compelling. Place an ink-stained handprint on its blankness so you have something to fix. You can't criticize the results. Consider this: "I'm not running out of ideas, just trying to push myself into better ones." in your episodes of creative block. to conceive of your blocks. , not just one. Blocked?