One - Listen to Pandora with No Ads, Higher Quality Audio, and More 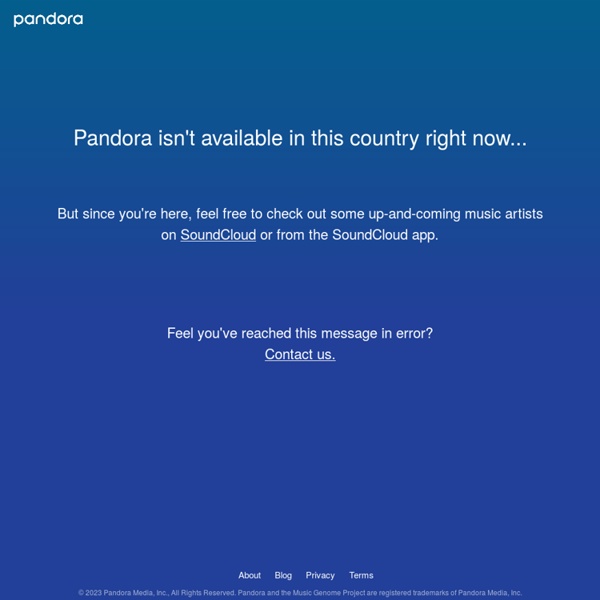 Dear Pandora Visitor, We are deeply, deeply sorry to say that due to licensing constraints, we can no longer allow access to Pandora for listeners located outside of the U.S., Australia and New Zealand. We will continue to work diligently to realize the vision of a truly global Pandora, but for the time being we are required to restrict its use. We are very sad to have to do this, but there is no other alternative. We believe that you are in Canada (your IP address appears to be 192.99.46.178). If you believe we have made a mistake, we apologize and ask that you please email us.

Plausible Denial, Mark Lane, E. Howard Hunt, and the Liberty Lobby Trial Did Mark Lane Convince a Jury that E. Howard Hunt was a Kennedy Assassination Conspirator? Mark Lane is a lawyer. That’s a good starting point for understanding his approach to the Kennedy assassination. Lawyers can get in trouble for telling outright lies, but they are free to – indeed are expected to – present only that information that serves the interests of their clients. They are free to – indeed are expected to – spin any piece of information to benefit their clients.

www.columbia.edu/~sss31/rainbow/murphy.combat.html 1. If the enemy is in range, so are you. 2. Incoming fire has the right of way. 3. Don't look conspicuous, it draws fire. 4. There is always a way. 5. Music Home Buy License A bright, upbeat motivating track featuring electric and acoustic guitars, strings, bells, warm synth, bass guitar and drums. Very positive, cheerful and playful music with uplifting ukulele ,sweet bells, upbeat claps and drums. Beautiful, clean and positive background music, would perfectly match for your business and company presentation video, promotional and commercial projects. Happy, energetic, uplifting and motivational vital music with the atmosphere of fortune and victory. Johnny Lists — 13 Resources You Should Use Instead of Cable by Johnny Webber 1. Crackle.com – Crackle provides streams for numerous movies and shows for free.

Schedules & Maps > Commuter Rail > Kingston/Plymouth & Middleborough/Lakeville <br/>(Old Colony Lines) <p><img src="/images/icons/nav_accessible.gif" alt="Accessibility icon" /><strong>JavaScript must be enabled in order for you to use Google Maps.</strong></p><p>However, it seems JavaScript is either disabled or not supported by your browser.</p><p>To view Google Maps, enable JavaScript by changing your browser options, and then try again.</p> Notes F Indicates that the train stops to discharge passengers on notice to the Conductor and to pick up passengers on platform visible to Engineer.

Larry Hancock Someone Would Have Talked goes beyond proving a conspiracy to murder JFK. Over 14.000 documents, White House diaries, telephone logs, and executive tape recordings detail how the new President managed a cover-up that changed the future of our country. A second conspiracy designed to mislead the nation, the world, indeed, history. New material in almost every chapter, new documents, new names, new leads! "They're going to kill him.

Native American Rights Fund, National Indian Law Library The National Indian Law Library (NILL) of the Native American Rights Fund (NARF) was founded in 1972 as a public law library devoted to federal Indian and tribal law. NILL serves the public by developing and making accessible a unique and valuable collection of Indian law resources and assisting people with their Indian law-related information needs. Stay Abreast of Current Events with Indian Law News Bulletins NILL is not tax-supported and relies on generous people like you.

Productions - world music,mediterranean,percussion,middle eastern Mr. Richard S Khuzami, both in his role as musician and producer, has worked to produce and promote the finest in artistic achievement in World Music, with a special emphasis on the Eastern Mediterranean and Middle East. Mr. Khuzami, of Lebanese extraction, is an accomplished percussionist, specializing in instruments from the Balkans, Anatolia, Middle East, and North Africa.

Every Noise at Once italian progressive metal deep symphonic black metal christian symphonic metal brazilian classical piano native american spiritual indonesian alternative rock Bootcamp App Exercise Descriptions & Couch to 5K Having trouble remembering the exercises? Don’t worry, with time you’ll know them all by heart, especially if you’re working out regularly. Here is a break down of Bootcamp’s exercises in each of the four categories. The in app exercise picture along with the description are listed below.

THE MURDER OF J.D. TIPPIT by S.r. Dusty Rohde On November 22nd, 1963, President John F. Kennedy was assassinated by what was once described as “a flurry of bullets” while riding in his Presidential motorcade in Dealey Plaza, Dallas, Texas. Within the hour, Dallas police patrolman, “J.D. Tippit ”would be gunned down in the streets of Oak Cliff (a Dallas suburb) in what could only be described as, in the style of a “professional execution”. The Dallas PD and Warren Commission would later claim both deaths were related and that “Communist sympathizer” Lee Harvey Oswald killed both men. Lee Harvey Oswald, without legal representation or a single day in court, was quickly “Branded” (with full intent) by the Warren Commission as the “Lone Assassin” and “Cop Killer”.

Ya Ive been using tastekid to find similar artists, then playing them on grooveshark. by vorenus182 Feb 18

I love them. Check out my Crystal Method station. I am not sure how to add friends so you can see my stations? by jenniflower Feb 17