Science - News for Your Neurons 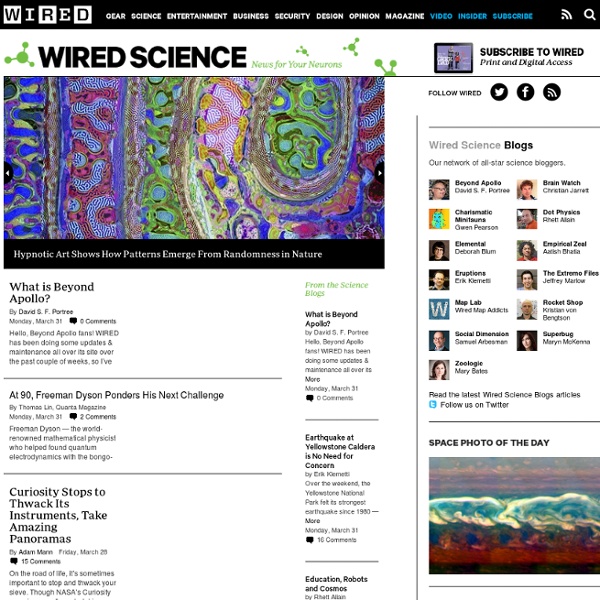 New Quantum Theory Could Explain the Flow of Time By Natalie Wolchover, Quanta Magazine Friday, April 25 222 Comments A new theory explains the seemingly irreversible arrow of time while yielding insights into entropy, quantum computers, black holes, and the past-future divide. Use Science and Tech to Build the Ultimate Automated Garden By Thomas Hayden and Sal Vaglica Monday, April 21 9 Comments Let people who love sore backs and dirty fingernails painstakingly tend their gardenias. Today’s backyard should be a maximized, automated, hyperefficient system of caloric production. With a little science—and some engineering prowess—you can keep your plot tidy, pest-free, and healthy while barely lifting a finger. So kick back with a gin-spiked kombucha and let your self-maintaining yard crank out the zero-mile arugula. A Patient’s Bizarre Hallucination Points to How the Brain Identifies Places By Genevieve Bookwalter Tuesday, April 15 12 Comments Dr.

Solar System Planet Earth A European researcher has interpreted carvings in a 32,500-year-old ivory tablet as a pattern of the same stars that we see in the sky today in the constellation Orion. The tablet is a sliver of ivory from the tusk of a mammoth — a large woolly animal like an elephant. Mammoths are extinct today. Carved into the ivory is what appears to be a carving of a human figure with outstretched arms and legs.

Synopsis of The Electric Universe “The most merciful thing in the world … is the inability of the human mind to correlate all its contents… The sciences, each straining in its own direction, have hitherto harmed us little; but someday the piecing together of dissociated knowledge will open up such terrifying vistas of reality… That we shall either go mad from the revelation or flee from the deadly light into the peace and safety of a new dark age.” - H. P. Lovecraft In a broadly interdisciplinary inquiry such as this, communication itself can pose quite a challenge. Typically, the greatest difficulties in communication will occur when one is questioning something already “known” to be true.

LHC Machine Outreach The Large Hadron Collider (LHC) is built in a circular tunnel 27 km in circumference. The tunnel is buried around 50 to 175 m. underground. It straddles the Swiss and French borders on the outskirts of Geneva. The first beams were circulated successfully on 10th September 2008. Unfortunately on 19th September a serious fault developed damaging a number of superconducting magnets. Paleontology & Archaeology Unique chromosomes preserved in Swedish fossil Researchers from Lund University and the Swedish Museum of Natural History have made a unique discovery in a well-preserved fern that lived 180 million years ago. Both undestroyed cell nuclei... Counting calories in the fossil record Starting about 250 million years ago, at the end of the Permian period, brachiopod groups disappeared in large numbers, along with 90 percent of the planet's species. Today, only a...

Biodiversity is not just about saving exotic species from extinc Starting Monday, celebrations and events across the world will highlight the beginning of the UN's Year of International Biodiversity and the loss of our richly varied flaura and fauna, which is estimated to be as high as 1,000 times the natural rate as a result of human activities. Ahmed Djoghlaf, the general secretary of the treaty signed by 192 countries since 1992 to protect biodiversity, is blunt about efforts to preserve the health of biodiversity since the Rio Earth summit 18 years ago. Governments worldwide have failed to meet the treaty's target of reversing the trend for declining biodiversity, he says, and urgently need momentum to hit its targets for 2020. Biodiversity is integral to our daily lives. It is not about the loss of exotic species which have been the focus of conservation activities by the foundations and trusts of wealthy nations. The equivalent to the Stern report for biodiversity is called The Economics of Ecosystems and Biodiversity (TEEB).