Everything You Need to Know About Addiction

5 Lies All Addicts Tell Themselves. Everything You Need to Know About Crystal Meth Addiction (And How to Quit) What to Expect When You Detox From Opiates. People who are addicted to opiates begin to feel the affects of opiate withdrawals rapidly after the last dose. 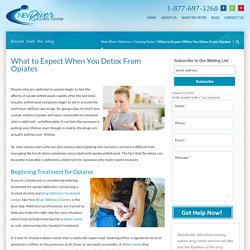 Usually, withdrawal symptoms begin to set in around the sixth hour without any drugs. So, going a day, or much less a week, without opiates will seem impossible to someone who is addicted– unfathomable. It can feel like someone is pulling your lifeline, even though in reality, the drugs are actually pulling your lifeline. So, even opiate users who are very serious about getting into recovery can have a difficult time managing the harsh detox symptoms associated with opiate withdrawal. The fact that the detox can be pretty miserable is definitely a deterrent for someone who really wants recovery. Beginning Treatment for Opiates If you or a loved one is considering entering treatment for opiate addiction, contacting a trusted alcohol and drug addiction treatment center, like New River Wellness Center, is the best step. Are You Suffering from Alcoholic Brain Damage?

Alcoholism is a chronic and progressive disease which has significant impacts to a person’s physical and mental health. 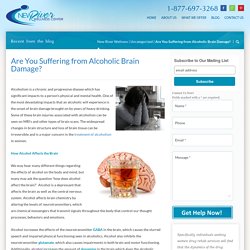 One of the most devastating impacts that an alcoholic will experience is the onset of brain damage brought on by years of heavy drinking. The Dangers of Benzo Withdrawals (And How to do It Right) Benzodiazepines (also known as benzos) are a family of drugs that belong to the tranquilizer family. 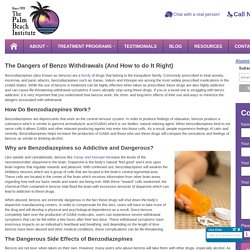 Commonly prescribed to treat anxiety, insomnia, and panic attacks, benzodiazepines such as Xanax, Valium and Klonopin are among the most widely prescribed medications in the United States. While the use of benzos in treatment can be highly effective when taken as prescribed, these drugs are also highly addictive and can cause life-threatening withdrawal symptoms if users abruptly stop using these drugs. If you or a loved one is struggling with benzo addiction, it is very important that you understand how benzos work, the short- and long-term effects of their use and ways to minimize the dangers associated with withdrawal. How Do Benzodiazepines Work? Benzodiazepines are depressants that work on the central nervous system. Addiction and the Baby Boomer Generation. In drug and alcohol rehab centers across the country, treatment professionals are seeing an increasing number of older adults enter substance abuse treatment. 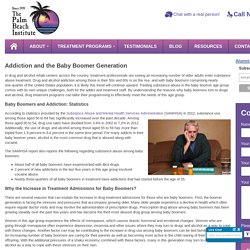 Drug and alcohol addiction among those in their 50s and 60s is on the rise, and with baby boomers comprising nearly one-quarter of the United States population, it is likely this trend will continue upward. Treating substance abuse in the baby boomer age group comes with its own unique challenges, both for the addict and treatment staff. By understanding the reasons why baby boomers turn to drugs and alcohol, drug treatment programs can tailor their programming to effectively meet the needs of this age group. Baby Boomers and Addiction: Statistics According to statistics provided by the Substance Abuse and Mental Health Services Administration (SAMHSA) in 2012, substance use among those aged 50 to 64 has significantly increased over the past decade.

Why the Increase in Treatment Admissions for Baby Boomers? A Step by Step Guide to Quitting Drugs. September 8, 2014 If you have made the decision to quit drugs or alcohol, you are making one of the most important decisions in your life. 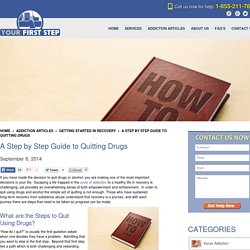 Prescription Drug Abuse: Am I an Addict or Addicted? August 26, 2014 The abuse of prescription drugs is an increasing problem that can affect all age groups. 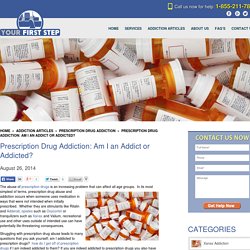 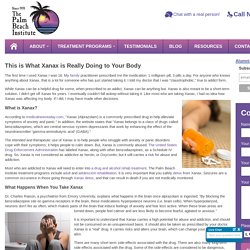 My family practitioner prescribed me the medication: 1 milligram pill, 3 pills a day. For anyone who knows anything about Xanax, that is a lot for someone who has just started taking it. I told my doctor that I was “claustrophobic,” true to addict form. While Xanax can be a helpful drug for some, when prescribed to an addict, Xanax can be anything but. Xanax is also meant to be a short-term solution. Isions. This is What Alcohol is Really Doing to Your Body. The drinking of alcohol can affect the body in a number of ways. 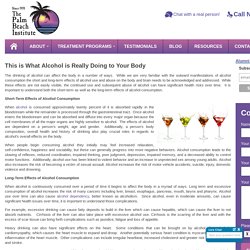 While we are very familiar with the outward manifestations of alcohol consumption the short and long-term effects of alcohol use and abuse on the body and brain needs to be acknowledged and addressed. While these effects are not easily visible, the continued use and subsequent abuse of alcohol can have significant health risks over time. It is important to understand both the short-term as well as the long-term effects of alcohol consumption. Short-Term Effects of Alcohol Consumption. What Opiates are Really Doing to Your Brain.

October 17, 2014 There are a lot of people who don’t believe that addiction is real. 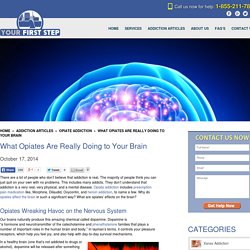 The majority of people think you can just quit on your own with no problems. This includes many addicts. They don’t understand that addiction is a very real, very physical, and a mental disease. Opiate addiction includes prescription pain medication like, Morphine, Dilaudid, Oxycontin, and heroin addiction, to name a few. Opiates Wreaking Havoc on the Nervous System Our brains naturally produce this amazing chemical called dopamine. The Truth About Teen Alcoholism. If you are a parent of a teenager, alcohol use and teenage alcoholism is a major issue that is ever present and unfortunately overlooked. 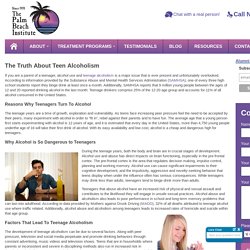 According to information provided by the Substance Abuse and Mental Health Services Administration (SAMHSA), one of every three high school students report they binge drink at least once a month. Additionally, SAMHSA reports that 9 million young people between the ages of 12 and 20 reported drinking alcohol in the last month. Teenage drinkers comprise 25% of the 12-20 age group and accounts for 11% of all alcohol consumed in the United States. Everything You Need to Know About Molly. October 31, 2014 Many of us have heard of the club drug MDMA, also known as “Molly.”

Miley Cyrus, a pop culture icon, could be the spokeswoman for Molly. I hear about Molly everywhere– not just in song lyrics, but in news articles, and in general conversation. Molly is definitely not a new drug. But, why the sudden increase in popularity? What is Molly, Anyway? According to USA Today, “Molly” is slang for molecular. Ic genre, which has recently been dubbed “EDM.” MDMA may carry the risk of negative side effects, like any drug.

The Psychology behind the Phenomenon of Craving. The disease of addiction is chronic, and many people who seek recovery from substance abuse are often prone to relapse. There has been substantial research into the phenomenon of cravings as a major trigger for relapse in addicts.