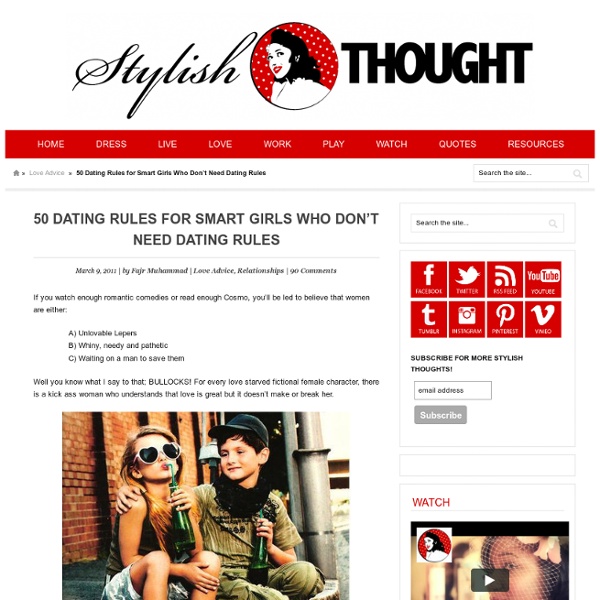 Fairy Tales Can Come True Here's a "photo story" based on the book, Fairy Tales Can Come True (Just Not Every Day!), published by Shake It! Books. You'll have a few giggles... and learn a few things as well! Who's Wearing the Pants? by Sylvia Martinez | 10/26/2011 Women are taking over the world, quite literally. From the corridors of colleges, universities and law schools to the arenas of construction and mining, the number of women has increased exponentially and organically. Girls also typically outperform boys in school and research shows their brains may be better equipped to succeed academically.One in three businesses in California is owned by a woman, and you can bet many of them are Latinas. 40 Belief-Shaking Remarks From a Ruthless Nonconformist If there’s one thing Friedrich Nietzsche did well, it’s obliterate feel-good beliefs people have about themselves. He has been criticized for being a misanthrope, a subvert, a cynic and a pessimist, but I think these assessments are off the mark. I believe he only wanted human beings to be more honest with themselves. He did have a remarkable gift for aphorism — he once declared, “It is my ambition to say in ten sentences what others say in a whole book.”

What Makes a Relationship Great? Why are some couples happier than others? What is the “secret” for a great relationship? With certain couples it is clear there is something about the way they interact that makes it obvious they have a unique and genuine connection. Four Rules to Understand What Makes People Tick - Stepcase Lifehack Breaking down human behavior into rules might seem like a gross simplification. But even with the complexities, it is easy to fall into the same mistakes. I’d argue that many heated fights, lost sales and broken hearts are caused by a few critical errors. If you make the wrong assumptions, you’ve lost before you begin. By keeping in mind these rules, you can avoid repeating the same mistakes. Rule One: People Mostly Care About Themselves

The Dalai Lama’s 18 Rules For Living May 6, 2011 | 42 Comments » | Topics: Life, List At the start of the new millennium the Dalai Lama apparently issued eighteen rules for living. Since word travels slowly in the digital age these have only just reached me. Here they are. Take into account that great love and great achievements involve great risk. How To Tell If Somebody Loves You Somebody loves you if they pick an eyelash off of your face or wet a napkin and apply it to your dirty skin. You didn’t ask for these things, but this person went ahead and did it anyway. They don’t want to see you looking like a fool with eyelashes and crumbs on your face. They notice these things. They really look at you and are the first to notice if something is amiss with your beautiful visage!

38 Ways To Win An Argument—Arthur Schopenhauer - The India Uncut Blog - India Uncut For all of you who have ever been involved in an online debate in any way, Arthur Schopenhauer’s “38 Ways To Win An Argument” is indispensable. Most of these techniques will seem familiar to you, right from questioning the motive of a person making the argument instead of the argument itself (No. 35), exaggerating the propositions stated by the other person (No. 1) , misrepresenting the other person’s words (No. 2) and attacking a straw man instead (No. 3). It’s a full handbook of intellectual dishonesty there.

Old Fashioned Potato Candy Have you ever heard of candy made from a potato? For years my mom has talked of this mysterious potato candy that she loved as a little girl. She would spend magical summers at her grandparents house gleefully running through grapevine arbors, relishing in the homemade jams and jellies made from the grapes. Body Language and Flirting - Blifaloo Interesting Info -> Body Language -> Flirting Body Language (part 1) Quick Jump: General Signs of Flirting | Male Flirting | Female Flirting Also See: Body Language Resources | Decoding Male Body Language Updated March 21st - 2012.