Anything and everything. research part 1.

Ding sexism out of the UK tech industry. How political passions undermine rationality. Though people might disagree on how to solve a problem, they can at least agree that the problem exists. 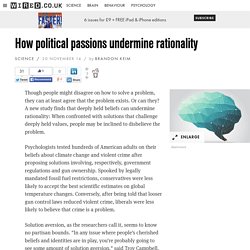 Or can they? A new study finds that deeply held beliefs can undermine rationality: When confronted with solutions that challenge deeply held values, people may be inclined to disbelieve the problem. Psychologists tested hundreds of American adults on their beliefs about climate change and violent crime after proposing solutions involving, respectively, government regulations and gun ownership. Spooked by legally mandated fossil fuel restrictions, conservatives were less likely to accept the best scientific estimates on global temperature changes.

Conversely, after being told that looser gun control laws reduced violent crime, liberals were less likely to believe that crime is a problem. Solution aversion, as the researchers call it, seems to know no partisan bounds. Democrats were slightly less likely to accept climate change after reading about the free-market solution. Viviane Sassen: an experiment in the unorthodox. Listing every brand Jay Z has ever rapped about. Oil prices likely to fall further, says IEA. 14 November 2014Last updated at 07:13 ET Oil prices are likely to continue falling well into 2015, the International Energy Agency has said. 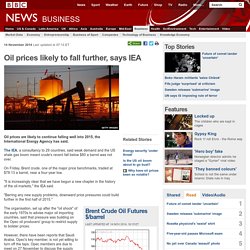 The IEA, a consultancy to 29 countries, said weak demand and the US shale gas boom meant crude's recent fall below $80 a barrel was not over. On Friday, Brent crude, one of the major price benchmarks, traded at $78.13 a barrel, near a four-year low. "It is increasingly clear that we have begun a new chapter in the history of the oil markets," the IEA said. "Barring any new supply problems, downward price pressures could build further in the first half of 2015. " Continue reading the main story The organisation, set up after the "oil shock" of the early 1970s to advise major oil importing countries, said that pressure was building on the Opec oil producers' group to restrict supply to bolster prices.

House sales reach seven year high as prices climb another £2,000 in October. Uplift in activity outside London drives the number of completed property sales to seven-year highHouse prices climbed 0.7% (or £2,026) in OctoberAverage value of UK properties has increased by £26,500 or 10.5 per cent in 12 months By Jane Denton For Thisismoney Published: 10:22 GMT, 14 November 2014 | Updated: 11:22 GMT, 14 November 2014 The property market is shrugging off the recent slowdown with the number of completed house sales rising to their highest level for seven years, new figures suggest. 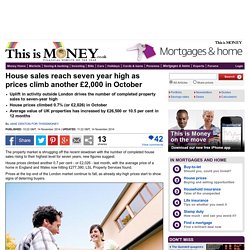 House prices climbed another 0.7 per cent - or £2,026 - last month, with the average price of a home in England and Wales now hitting £277,390, LSL Property Services found. Prices at the top end of the London market continue to fall, as already sky-high prices start to show signs of deterring buyers. Bethenny Frankel to businesswomen: “Just be better than men” Bethenny Frankel first caught the public’s eye during her stint on Bravo’s ”CMCSA” Real Housewives of New York. 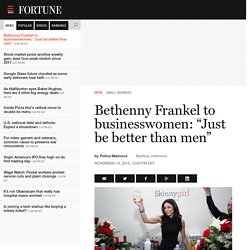 Like many of her reality TV peers, she used that platform to build a brand. But unlike those peers, she was able to sell her company for a pretty penny. Fortune Brands’ Beam Global Spirits & Wine bought Skinnygirl, which sells low calorie cocktails in sleek bottles, for a reported $100 million in 2011. Apparently, though, her advice to find that sort of success varies greatly from Facebook COO Sheryl Sandberg’s more polished advice in her best-selling career book Lean In. “I think the Sheryl Sandberg book provoked an interesting conversation, but I just don’t understand why there’s so much conversation about ‘the ceiling,’” Frankel said at an event hosted by Fidelity Investments and Purewow in Manhattan on Wednesday night. Poundworld swamped after Frozen merchandise goes on sale for Christmas. Parents passed items over their shoulders because crowds were too big One shopper said it was such a mad rush she felt 'claustrophobic' The Nottingham Poundworld completely sold out of Frozen products By Steve Hopkins for MailOnline Published: 16:27 GMT, 14 November 2014 | Updated: 18:44 GMT, 14 November 2014. 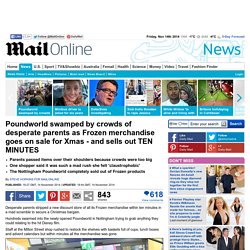 Norwich is trying to turn skateboarding into a crime. UK skaters are facing another battle to keep the scene above board, this time not in London but in Norwich. 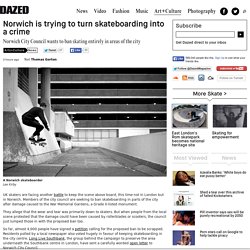 Members of the city council are seeking to ban skateboarding in parts of the city after damage caused to the War Memorial Gardens, a Grade II-listed monument. They allege that the wear and tear was primarily down to skaters. But when people from the local scene protested that the damage could have been caused by rollerblades or scooters, the council just lumped those in with the proposed ban too.

Redefining the abstract. “We live in a moment of HD clarity,” explains Francesca Gavin, Visual Arts Editor here at Dazed and curator of Fade Out, an exhibition currently on show – and for sale – in London until January. 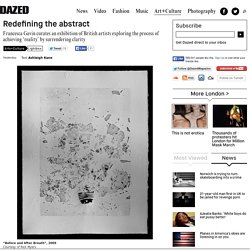 “I wanted to highlight how representation isn’t always so clear. I love blur, fuzz, fade, smudge and mist – reality is space and absence as much as form and figure.” University anti-rape protesters told to pay clean-up fees. At the end of October, students all over America held a protest in support of Emma Sulkowicz, the Columbia senior who says she was raped in her dorm and left with no protection or support from the school. 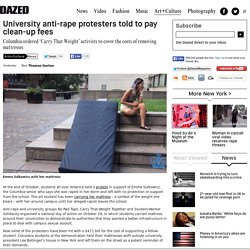 The art student has been carrying her mattress – a symbol of the weight she bears – with her around campus until her alleged rapist leaves the school. Anti-rape and university groups No Red Tape, Carry That Weight Together and Student-Worker Solidarity organised a national day of action on October 29, in which students carried mattress around their universities to demonstrate to authorities that they wanted a better infrastructure in place to deal with campus sexual assault. Now some of the protesters have been hit with a $471 bill for the cost of supporting a fellow student. The Secret Language of Girls on Instagram. 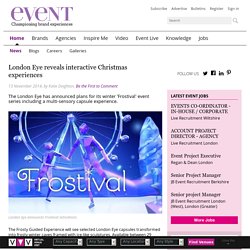 Available between 29 November 2014 and 3 January 2015, the pods will give guests a full 4D experience with scent technology producing smells of mint chocolate. The experience will also feature sounds of blowing wind and crackling ice, while expert guides will provide winter facts about London’s most famous landmarks. For over-18s, The London Eye has also developed a winter cocktail experience, available from 27 November 2014 until 3 January 2015. The Lost Art of Writing. What: Displays When: – Where: Metalware, Room 116 DISPLAY: 'Beautiful Writing pleases everyone, it makes one sought after,' explained the French writer Père Gregoire Martin in 1761. 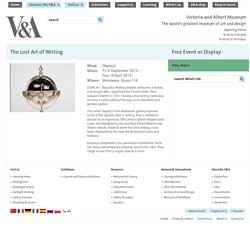 Having a fine writing hand was not only a useful skill but the sign of an educated and genteel person. Where Do The Converted Find Their Fervour? The Different 'Selling Points' Of Faiths. Throughout November, The Huffington Post UK is featuring its Beyond Belief series, chronicling the remarkable lives of Britons who've taken on their faith to create a force for change. Picture a typical religious convert and you are likely to conjure up a zealous American-style preacher, or the ginger-bearded jihadi fronting recruitment videos for Islamic State in Syria. The phrase "the fervour of the converted" is common parlance, giving the impression that converts are attracted to extreme aspects of faith.

But detailed research has shown that the most common religious converts are actually young, educated women. According to experts, religions have different "selling points", characteristics that a person might seek out: new Christians tend to be seeking salvation, Muslim converts look for discipline, Buddhist adoptees are drawn to the spirituality of the faith, and Jewish converts are attracted to the strength of community. Rabbi Jonathan Romain: The Conversion Merry-Go-Round. The Serving Library. How do we access, share and preserve information in the modern age? As we increasingly depend on technology, specifically the World Wide Web, and shy away from traditional sources of information, what is to become of the library? The Serving Library provides an answer to what the library of the future could look like. Using three forms of publication – magazine (Bulletins of the Serving Library, formally Dot Dot Dot), exhibition and public talks programme – to educate, share and discuss information and ideas, The Serving Library offers a new structure for the traditional public library.

Constructing Worlds: Photography and Architecture in the Modern Age. SMALL TOWNS, CRAP DRUGS. Away from the UK’s cities, legal highs are becoming the scourge of small-town Britain. A Mixmag special report on how crap drugs are taking over. "This Is Not A Toy" Exhibition Curated by Pharrell. Ruin Lust. 1 of 5 Ruin Lust, an exhibition at Tate Britain from 4 March 2014, offers a guide to the mournful, thrilling, comic and perverse uses of ruins in art from the seventeenth century to the present day. The exhibition is the widest-ranging on the subject to date and includes over 100 works by artists such as J.M.W. Shit and Die: Maurizio Cattelan curates controversial exhibition in Turin. We're on the brink of another global recession, warns PM: Cameron says 'red warning lights' are flashing  From arsenic in rice to toxic metals in sweets and veg . . . Poisons in your shopping basket  Scientists Develop Brain Decoder That Can Read Your Inner Thoughts.

Elle Magazine Causes Outrage By Calling Calvin Klein's First Size 14 Model Myla Dalbesio 'Plus Size' Third Of Graduate Interns Work For Nothing To Get On Career Ladder. Edible packaging is the ultimate in zero waste. Good News Alert! Now You Can Pay For Clothes In Tweets. Women In India Just Got The Right To Work As Make-Up Artists After A 60-Year Ban. Scientists Are Growing Penises In Labs And They're Going To Be Tested On Humans Soon.

The People You've Definitely Facebook Stalked And Why It's Totally Fine Behaviour. Office Robot Knows When to Ask for Help. People Around The World. Now Google Wants Your Genome, Too. Now Google Wants Your Genome, Too. The Networked Economy promises to transform just about every aspect of how people live and work. Startup Semprius Fights to Bring Breakthrough Solar Tech to Market. Tap Your Smartphone, Zap Your Head, and Relax. How Many Friends Can One Man Have? It Isn't Arrogant to Pursue Your Dreams. Reality TV Has Failed. A Change of Clothes. Study: 40% of Americans Live Paycheck to Paycheck. Stop Wondering What ‘Might Have Been’ The Spiritual Importance of Going to Counseling. Does 'Hashtivism' Really Work? Cereal Magazine / NY State of Mind. Cereal Magazine / The Chair.