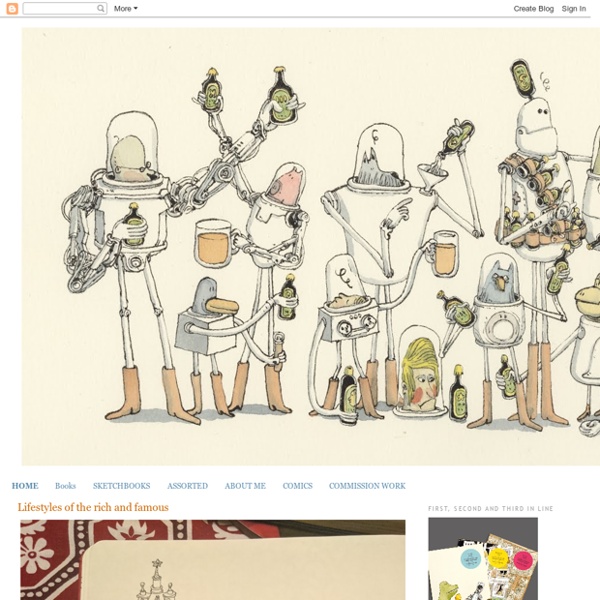 Ideas Made of Light Before I say anything else, if you’re an artist you should go buy both of James Gurney’s books about painting. If you like the approach this blog takes to analyzing paintings, you’ll love Gurney’s approach in these books. The one this painting is from is Color and Light: A Guide for the Realist Painter, and his first one is Imaginative Realism: How to Paint What Doesn’t Exist. (As a former technical writer I also like the presentation – each topic is a 2-page spread with a summary up-front, clear text, and a number of illustrations.) OK, plug over, but they’ve both helped me out tremendously.

Mitch McGee Mitch McGee is an American artist based in Houston. His works, close to the Pop art and illustrations by Roy Lichtenstein , range from painting and sculpture. Previously drawn on a sheet of plywood, the picture is then cut along its contours creating works in relief. 50 Beautiful Moleskines Moleskine notebooks are typically bound in coated paper cardboard with an elastic band to hold the notebook closed. They include a sewn spine that allows it to lie flat when opened, cream colored paper, rounded corners, a ribbon bookmark, and an expandable pocket inside the rear cover. So today we’ve collected 50 remarkable moleskines. Enjoy! Return of the Bump, Moleskine Feb-May 2011 “Anny”, personal, 2014 “Halo creative collection”, Hairhouse Warehouse, 2014 WAD magazine cover rework for 10th anniversary exhibition, 2010 Piece from series to New Nordic Fashion Illustration exhibition, 2011 Illustration for Trendi magazine, 2013 Editorial for Revolution magazine with photographer Tomas Monka, 2012

Banned Book Week: Tips for Teaching Censorship Banned Books Week is celebrating thirty years of highlighting “the benefits of intellectual freedom and drawing attention to the harms of censorship by spotlighting actual or attempted banning of books across the United States, including books commonly taught in secondary schools.” 1 This year, Banned Books Week will be held September 30th through October 6th. Free Speech vs. Questionable Material According to the American Library Association, 326 books were challenged in 2011. Because most challenges are not reported to the ALA, it is believed that this represents about one quarter of all challenges made in school and public libraries. The First Amendment protects the content of books. The Art of Heinrich Kley Heinrich Kley was born April 15, 1863, in Karlsruhe, Germany, and studied art with Ferdinand Keller at the Karlsruhe Akademy and with C. Frithjob Smith in Munich. He started out as an illustrator and a painter of murals, focussing on portraits, still lifes, animals, and landscapes. By the turn of the century Kley’s interest changed to modern industrial life, including factories, blast furnaces, ship docks, industrial buildings, and machinery. One of his best-known oil paintings from this time period is "Tiegelstahlguss bei Krupp" (Crucible steel casting with Krupp).

Kim Deitch On Wikipedia : "Kim Deitch (born 1944) is an American comics artist. He was an important figure in the underground comix movement of the 1960s, regularly contributing comical, psychedelia-tinged comic strips (featuring the flower child "Sunshine Girl" and "The India Rubber Man") to New York City's premier underground newspaper, The East Village Other, beginning in 1967. Stunning Red Fox Illustrations Using Watercolors and Ink With all of the fancy software available to artists and illustrators these days, it's wonderfully refreshing when you spot work that's made in more traditional ways. Saint Petersburg, Russia-based artist Alice Macarova recently completed a new project called Vulpes Vulpes, a triptych featuring adorable red foxes. As the 22-year-old told us, "I chose foxes because I love to draw animals. Besides that, I wanted to work with bright red and orange colors."