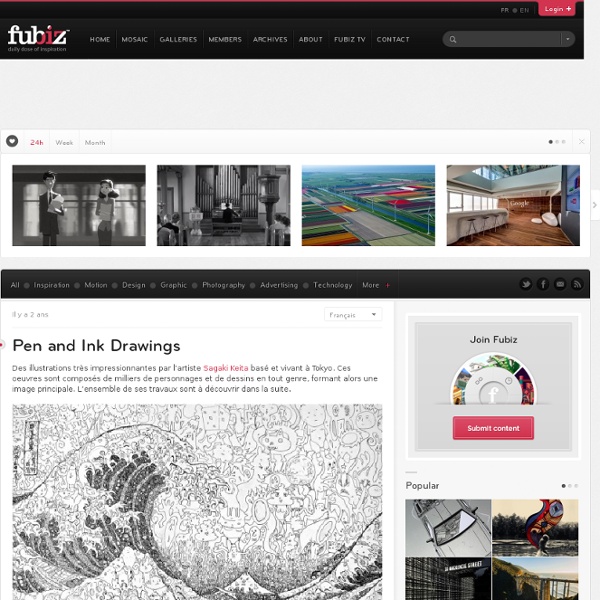 Daily Dosage #250 Daily Dosage is a collection of inspirational images neatly displayed here for your enjoyment. Keep your creative juices flowing by checking out Daily Dosage every weekday, Monday through Friday! If you missed a day, or are looking for previous entries, why not stop by the archive? Find this post useful? The Beauty of Liquid Chinese artist Paul Shanghai can be drawing for 60 hours or more to perfect the look of flowing water, which is quite difficult to achieve due to the movement and transparency of this liquid. His artwork is composed on smooth paper that has a Bristol board kind of surface, and he uses various materials depending on each visual—e.g. mechanical and graphite pencils, erasers and blending stumps. Artwork © Paul Shanghai Via Drawing Pencil

Switzerland Switzerland In June 2011, we spent a week in Switzerland, flying into Geneva, with an initial stop in Montreux, followed by a picturesque stay in Wengen, located above the Lauterbrunnen valley. The alps provided a stunning backdrop to explore the area. The village of Wengen where we stayed in an alpine chalet/hotel, above the Lauterbrunnen valley. Lauterbrunnen below, with its iconic waterfall. The train system in Switzerland is excellent. The train to Jungfrau. In the village of Lauterbrunnen. Another scene from Lauterbrunnen. Alpine cable cars rise into the fog above Wengen. The lakeshore village of Brienz. Brienz. Lucerne. Alpine village of Murren. Artist H.R. Besides cows, goats and sheep tend to be outfitted with bells. A cog train at Kleine Scheidegg. Riding the train from Kleine Scheidegg back to Wengen offered stunning valley views. The Swiss version of "Zip Line" takes you up to 75 MPH for almost a 1/2 mile. Relaxing with a plate of charcuterie under Mt. © 2013 John Miranda

Joe Fenton | EMPTY KINGDOM You are Here, We are Everywhere Artist: Nanami Cowdroy I LOVE Nanami Cowdroy! Her style of art is a refreshing twist on old school Japanese illustration… which makes sense since she’s half Japanese and half European. Throw in the fact that she’s Australian (oh man, that accent) and, as I said, I’m in love. From what I’ve noticed while trolling the internet, a number of people like Nanami Cowdroy’s art so much that they’ve decided to tattoo her designs on their bodies. Website | Facebook Related Posts 25 Mind-Blowing Aerial Photographs Around the World Rano Kau volcano in Rapa Nui National Park, Easter Island, Chile – Photograph by YANN ARTHUS BERTRAND For me, the allure of aerial photography is the unique perspective it gives. The world feels so different when viewed from above. It always gives me a newfound appreciation for this pale blue dot we call home. In my opinion, there is no better aerial photographer than Yann Arthus Bertrand. 2. Photograph by YANN ARTHUS BERTRAND 3. 4. 5. Born in Paris, France on March 13, 1946, Yann Arthus-Bertrand is a world-renowned photographer specializing in aerial photography. Upon his return to France, he published in 1981 his first book Lions, first release of a series of 80 books. 6. 7. 8. 9. 10. YANN ARTHUS-BERTRAND continued… In the 90s, under the patronage of UNESCO, Yann embarked upon his most ambitious project: creating an image bank of the Earth seen from above. 11. 12. 13. 14. 15. “For a long time, I was afraid to use that word. 16. 17. 18. 19. 20. 21. 22. 23. 24. 25.