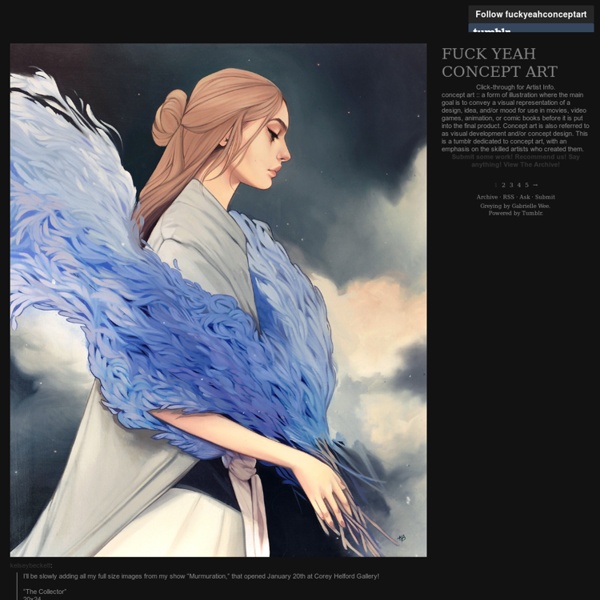 kelseybeckett: I’ll be slowly adding all my full size images from my show “Murmuration,” that opened January 20th at Corey Helford Gallery!“The Collector”20x24Oil on CanvasPrints of this piece are available at !!! poolsofchrome: Steel, muscle, sinew and not much in the way of a limbic system mischeviouslittleelf: Areit, thats all you get for now Related:  קונספט ארט ועיצוב דמויות

Alex Drummond Illustration Painting sci-fi girls by Clonerh Kimura Clonerh Kimura's love of sci-fi, girls and guns fueled the inspiration behind his image, Journey. He guides us through his thought process, from the early stages to the finishing touches of his illustration... Sci-fi, girls and guns are just some of my inspirations. I'm a big fan of many things, but Japanese animé, comic books and sci-fi movies are my principal inspirations. Amazing pieces such as Akira, Ghost in the Shell, or, on a different note; Stars Wars, Aliens and Blade Runner have had a massive impact on my life. In the last year or so I've had the chance to create concepts and design characters after spending a lot of my career as a colorist. For anyone out there who has the same problem, this project overview could be very useful, even though it only scratches the surface. The idea Well, let's get started! A series of initial thumbnails The sketch Defining the outline of the character Evolving the sketch This step isn't important, but I wanted to show it. Grey vs. color Definition

--- Tony Holmsten's Portfolio A realtime portrait - HUGE MAKING OF / TUTORIAL -BREAKDOWN--I started cleaning the raw data using the clay brush with alt pressed (zsub) and also using the Smoothing`s tweaked algorithm – Hold shift, click and hold with the pen, release shift, and then you go. This mainly smooth out the surface without changing the overall surface too much. This also removes all those stars and triangles points that you get using dynamesh. -I duplicate the head, set a morph target and then re-project all those raw details back.

theconceptartblog.com Ron Spencer's Blog Batman: Arkham Knight Exclusive Artwork and Screenshots CHILDREN'S ILLUSTRATION Brom Crossing the uncanny valley WIP latest update : Quote: __________________________________________________ ______________________ So, this is gonna be sort of a making-of'ish, tutorial'ish thread on how to create an accurate face scan for anybody, basically all you need is a digital camera and internet connection. So for me the plan was to create an one-to-one digital copy of a real life protagonist (from the neck up) for a DIY facial mocap later on. To the scanning part, i came across a free service provided by autodesk called Project PhotoFly (im sure many of you heard of it and tried it). The first crucial step is provide photofly with enough data I shot about 90 to 100 18 megapixel photos from every possible angle. This is how the model look in photofly viewport: This image is only for illustration purposes. This is the final scan i end up working with: Not bad for a free and easy solution if you ask me not bad at all. And of we go to topogun for retopology...