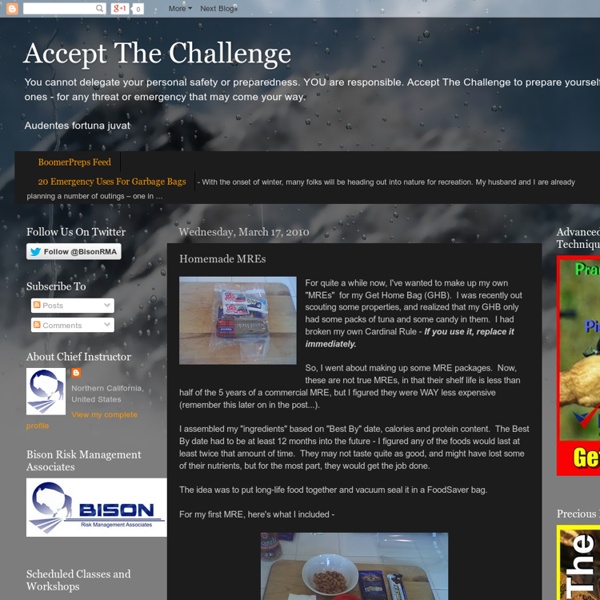 For quite a while now, I've wanted to make up my own "MREs" for my Get Home Bag (GHB). I was recently out scouting some properties, and realized that my GHB only had some packs of tuna and some candy in them. I had broken my own Cardinal Rule - If you use it, replace it immediately. So, I went about making up some MRE packages. Now, these are not true MREs, in that their shelf life is less than half of the 5 years of a commercial MRE, but I figured they were WAY less expensive (remember this later on in the post...). I assembled my "ingredients" based on "Best By" date, calories and protein content. The idea was to put long-life food together and vacuum seal it in a FoodSaver bag. For my first MRE, here's what I included - Since the peanuts were loose, I wanted to separate them in the pouch. I then filled that with the peanuts and sealed it. I then filled the bag with the rest of the goodies, and vacuum sealed the whole thing - Here are the stats - Here's the result - Times have changed!

Survival Properties of Garlic and Apple Cider Vinegar | Survival (Before It's News) Guest post by Garlic is one of the earth’s greatest health tonics and does indeed have scientifically-proven medicinal properties. It contains a substance called Allicin, which has anti-bacterial properties that are equivalent to a weak penicillin. It is a natural antibiotic and is useful in treating everything from allergies to tonsillitis. Photo credit Garlic can stimulate the production of glutathione, an amino acid which is known to be a very potent antioxidant and de-toxifier and the smooth muscle relaxant adenosine, also found in the herb, will lower blood pressure. Today people use garlic to help prevent atherosclerosis (plaque build up in the arteries causing blockage and possibly leading to heart attack or stroke), reduce colds, coughs, and bronchitis. Survival Properties:Garlic is a great antibiotic and also has powerful antiviral properties making it a good choice all year to combat colds, flu, ear infections, and maintain a healthy circulatory system. 1. 3.

How to Put Together the Ultimate Survival Kit | Tactical Intelligence Would you be willing to stake your life on your survival kit? I would. There are so many debates when it comes to the perfect survival kit. My entire kit is based off of three tiers — one that I carry with me, one that I keep in my car (and sometimes on me), and one that is in my home ready to go in a moments notice if I had to bug out. The Three-Tiered Survival Kit First Tier: This ‘kit’ includes those items that you have with you at all times. Folding Knife: If you’ve ever been in a survival situation (planned or not) you know how essential a knife is. While I would at the least recommend the Essential 3, there are a few other items you may want to consider carrying as part of your EDC (Every Day Carry) Gear or first Tier. Coin Sized Compass: These are those small, coin-sized compasses you see in many mini survival kits. The key to the first-tier kit is to incorporate it as much as possible with what you wear. Second Tier: Fixed Knife: In other words, non-folding. Third Tier: Conclusion

Deodorant Recipe Thank you for visiting Little House in the Suburbs. Please subscribe and you'll get great simple living tips and how-to articles delivered to your inbox, for free! In the DIY world of home health and beauty products, deodorant seems to be the the most feared replacement. Stinking is NOT OKAY in our culture, right? But aluminum crammed in your pores cannot be good for you, and it seems in recent years that store-bought deodorant is becoming less and less effective anyway. So, here’s what I suggest….make this stuff ahead and use it on SATURDAY, or a sick day, or any day you aren’t going to see anyone special, so you’ll feel secure and not look like a nut obsessively sniffing your underarms all day. Homemade Stick Deodorant 1. 2. 3. 4. When applying this deodorant, use a lighter hand than you would with normal stick deodorant, especially the first couple of days or it’ll drop little balls on your bathroom rug.

The Top 10 Healthiest Seeds on Earth They come in all different sizes, shapes and colours. The seed is an embryonic plant itself and the origin of nutrition. A plant goes to great lengths to produce each seed and fill it with high concentrations of vitamins, minerals, proteins, essential oils and dormant enzymes. A seed is life. How to Eat Seeds There is only one way to derive nutrition from seeds and that is to eat them raw. - Choose raw and unsalted seeds - Avoid coated or roasted seeds - Avoid sugar coated seeds The 10 Healthiest Seeds on Earth Serving Size = 1 Tsp Consider these facts about Chia seeds: - 2.5 times more protein than kidney beans - 3 times the antioxidant strength of blueberries - 3 times more iron than spinach - 6 times more calcium than milk - 7 times more vitamin C than oranges - 8 times more omega-3 than salmon - 10 times more fiber than rice - 15 times more magnesium than broccoli The seeds are gluten-free, which also makes them appealing to people with celiac disease or an aversion to gluten.

Kits & Bags Home Made MRE I have been looking for sometime for a direct replacement for the commercial MRE due to the high price, weight and limited choices in entrees. I first started back in 1983 with a then new vacuum sealing system. This was before retort pouches were widely available and the few that were had a limited variety. I was unhappy with the results I was having with the available choices of food for backpacking trips and started experimenting with my own concoctions. With all the new advances in packaging and the different choices now available, a homemade "MRE" style food pack can be made for a fraction of the cost of the commercial variety. Besides being expensive (I feel), MRE’s are fully constituted so they are heavy as well as bulky. Over time my criteria evolved and culminated in this current home made MRE. This is designed with the premise that breakfast and supper on the trail will most likely be eaten in the same encampment. Notice the size of these 3 meals compared to one MRE meal.

Meet the Man Who Stalks the World's Biggest Fish In the slow-motion depths of Southeast Asia's Mekong River lurks the critically endangered Mekong giant catfish, one of the world's biggest freshwater fish. When biologist Zeb Hogan first spied this shadowy goliath as an exchange student to Thailand in 1997, he knew he had to learn more about them. Since then, he's branched out and begun studying other huge fish as a biologist at the University of Nevada, Reno, and a National Geographic Explorer. Now, he travels the world to find these beasts as a part of Nat Geo WILD's "Monster Fish," which airs on Fridays. The next episode will air tonight (July 19) at 10 o'clock ET. LiveScience's OurAmazingPlanet got Hogan on the phone to hear more about his adventures. Livescience: What's the biggest fish you've ever seen? Zeb Hogan: A 15-foot-long [4.6 meters] giant freshwater stingray. There are about 30 species that weigh at least 200 pounds [91 kg] and are at least 6 to 7 feet long [1.8 to 2.1 m]. LiveScience: What's your favorite fish?

The 7 Best First Aid Kits For Any Situation DIY Kit Price varies An easy way to think about the necessary contents of a first-aid kit is to break it up into two categories: it should have bandages and it should have medicine. For a bare-bones kit, Wedmore recommends plenty of gauze, including at least one roll of Kerlix bandages and some non-adhesive gauze. A handful of butterfly bandages, different-size bandages and an ace bandage should be included as well. As far as medication goes, Tylenol or a generic equivalent, an anti-inflammatory such as aspirin, an antihistamine such as Benadryl and diarrhea medication would be sufficient for most short-term needs. A few pairs of rubber gloves, paramedic's scissors, alcohol pads, Neosporin, lots of duct tape and a CPR face shield should finish the kit off. Pocket-Size First Aid Coghlan's Pack I First Aid Kit | $4 Off-the-Shelf and Disaster-Ready Respond Systems' Four-Person Disaster Kit | $126 Backpacking Kit Adventure Medical Kits' Ultralight & Watertight .9 | $35 Automobile Kit