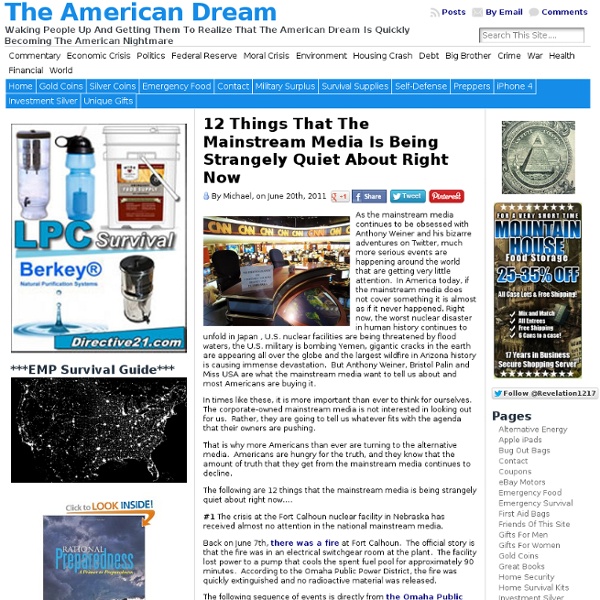 As the mainstream media continues to be obsessed with Anthony Weiner and his bizarre adventures on Twitter, much more serious events are happening around the world that are getting very little attention. In America today, if the mainstream media does not cover something it is almost as if it never happened. Right now, the worst nuclear disaster in human history continues to unfold in Japan , U.S. nuclear facilities are being threatened by flood waters, the U.S. military is bombing Yemen, gigantic cracks in the earth are appearing all over the globe and the largest wildfire in Arizona history is causing immense devastation. But Anthony Weiner, Bristol Palin and Miss USA are what the mainstream media want to tell us about and most Americans are buying it. In times like these, it is more important than ever to think for ourselves. That is why more Americans than ever are turning to the alternative media. Back on June 7th, there was a fire at Fort Calhoun. Nobody is quite sure yet.

Monsanto blocks research on GMO safety Featured Published on February 14th, 2011 | by Jeremy Bloom Monsanto has been systematically blocking researchers from using its patented gene modified (GMO) seeds to learn if there are problems with them, according to an explosive op-ed in yesterday’s LA Times by Doug Gurian-Sherman of the Union of Concerned Scientists. This doesn’t come as a huge surprise, but it’s encouraging that it’s hitting the mainstream media. Soybeans, corn, cotton and canola — most of the acres planted in these crops in the United States are genetically altered. When Monsanto won a Supreme Court case last year allowing deregulation of their GMO Alfalfa, David Snively, Monsanto’s senior vice president and general counsel, called the decision “important for every American farmer, not just alfalfa growers.” “All growers can rely on the expertise of USDA and trust that future challenges to biotech approvals must now be based on scientific facts, not speculation,” said Snively. -> Next page: Years of abuse

The Battle for Your Mind: Brainwashing Techniques Being Used On The Public By Dick Sutphen Authoritarian followers Mind Control Subliminals By Dick Sutphen Summary of Contents The Birth of Conversion The Three Brain Phases How Revivalist Preachers Work Voice Roll Technique Six Conversion Techniques 1. keeping agreements 2.physical and mental fatigue 3. increase the tension 4. Summary of Contents The Birth of Conversion/Brainwashing in Christian Revivalism in 1735. I'm Dick Sutphen and this tape is a studio-recorded, expanded version of a talk I delivered at the World Congress of Professional Hypnotists Convention in Las Vegas, Nevada. Although I've been interviewed about the subject on many local and regional radio and TV talk shows, large-scale mass communication appears to be blocked, since it could result in suspicion or investigation of the very media presenting it or the sponsors that support the media. Everything I will relate only exposes the surface of the problem. In talking about this subject, I am talking about my own business. The Birth of Conversion Charles J.

Best Sites for Primary Documents in World History Common Core offers an incentive for teachers to use historic documents to build literacy skills in a content area while empowering students to be the historian in the classroom. But document-based (DBQ) instruction in this context requires four key elements to be successful: The right documents. Knowing how to look at them. Letting students discover their own patterns, then asking students to describe, compare and defend what they found. I've assigned my pre-service social studies methods class the task of designing some DBQs and I assembled a list of some of my favorite sources for finding historic documents in World History. All these sites feature good search engines and the ability to download documents for use in classroom projects. Avalon Project The Avalon Project contains a vast collection digital documents relevant to the fields of Law, History, Economics, Politics, Diplomacy and Government. Musicians and an acrobat, Smithfield Decretals (Brit.

Print - Concerned About Your Digital Privacy? You Should Be Threat Level III: Devastating Victims: Harassed ex-spouses, government suspects, random targets, future homeowners Damage: psychological and physical Threats, oppressive Orwellian Intrusion GPS Car Tracking Low-cost GPS devices for tracking kids or pets may be marketed for innocent purposes, but they can also be used to sinister effect. Last October, Yasir Afifi, a college student and son of an Islamic-American community leader, discovered a GPS tracking device on his car during an oil change. Fight Back If you have reason to believe someone is tracking your vehicle, take it to a mechanic for a look-see—most found trackers pop up during routine inspections. Internet Trolls Allison Stokke wasn't looking for Internet fame, but it sure found her. Fight Back Protecting yourself from Internet trolls is like a farmer attempting to fend off locusts. The Aware Home The hot new Microsoft Kinect is a revolutionary camera-­based gaming accessory that recognizes the movements of players' bodies.

Radioactive tritium leaks found at 48 US nuke sites - US news - Environment BRACEVILLE, Ill. — Radioactive tritium has leaked from three-quarters of U.S. commercial nuclear power sites, often into groundwater from corroded, buried piping, an Associated Press investigation shows. The number and severity of the leaks has been escalating, even as federal regulators extend the licenses of more and more reactors across the nation. Tritium, which is a radioactive form of hydrogen, has leaked from at least 48 of 65 sites, according to U.S. Nuclear Regulatory Commission records reviewed as part of the AP's yearlong examination of safety issues at aging nuclear power plants. Leaks from at least 37 of those facilities contained concentrations exceeding the federal drinking water standard — sometimes at hundreds of times the limit. While most leaks have been found within plant boundaries, some have migrated offsite. At a fourth site, in New Jersey, tritium has leaked into an aquifer and a discharge canal feeding picturesque Barnegat Bay off the Atlantic Ocean.

Pretending WikiLeaks Doesn’t Exist: Government Secrecy Reaches Absurdity Yesterday, the ACLU filed a lawsuit after the State Department failed to respond to a Freedom of Information Act (FOIA) request seeking the declassification of 23 State Department cables disclosed by WikiLeaks and widely disseminated online and in the press. The cables we seek reveal the diplomatic cost of policies that the Bush and Obama administrations have tried to keep secret from the American public. Several of the cables describe high-level efforts by the government to pressure Spain and Germany into dropping investigations of the CIA's torture of detainees. Other cables requested by the ACLU reveal the government's paradoxical efforts to coordinate the resettlement or prosecution of Guantánamo detainees in foreign countries, even as the United States refused to resettle or prosecute those same detainees in the U.S. The ACLU's lawsuit comes on the anniversary of another famous leak.

VIDEO: Minister Farrakhan: 'That's a Murderer in the White House' Minister Louis Farrakhan (Getty Images) A YouTube video of Minister Louis Farrakhan taking President Obama to task over the war in Afghanistan and the bombing of Libya is making its way around the Web. In the video, Farrakhan admonishes the president for turning into someone else. Farrakhan says, "We voted for our brother Barack, a beautiful human being with a sweet heart, and now he's an assassin. They turned him into them." He also raises the issue of killing Saddam Hussein over weapons of mass destruction and knowingly sending young men to fight a war based on lies. Farrakhan is visibly angry at Obama's leadership of America's intervention in the crisis in Libya, particularly his focus on bringing down Muammar Qaddafi. We find it interesting that this video from May is surfacing just as Farrakhan is set to address the United Nations. We've examined how black leaders romanticize dictators like Qaddafi, and this is a major example of it. Watch video of the speech below.

Quadrant Online - John Howard and the media Extract from Tom Switzer – “John Howard and the Media” published in The Howard Era (Quadrant Books): He was called a “fool” (Michael Leunig), an “unflusha­ble turd” (Mungo MacCallum), a “scheming, menda­cious little man” (Alan Ramsey), who silenced dis­sent (Clive Hamilton), corrupted the public debate (David Marr) and used right-wing religious activists to indoctrinate the nation (Marion Maddox). He was also “far and away the worst prime minister in living memory” (Phillip Adams) who had a “pre-fascist fetish to attack minorities” (Margo Kingston). If any of these criticisms bothered John Winston Howard, he never let it show. Along with his dep­uty Peter Costello, he cut taxes, reformed welfare, balanced the national books, wiped out government debt, loosened organised labour’s grip on business, and presided over the longest eco­nomic boom since the gold rushes of the nineteenth century. Of course, such prejudice was hardly novel. Extract only. Quadrant Books

Lawmakers to sue Obama administration over Libya mission Congressmen challenge Obama on Libya NEW: Report says Obama does not risk violating the War Powers ActNEW: Boehner spokesman says Obama's "creative arguments" raise a number of questionsKucinich to the Obama administration: "Tell it to the judge"U.S. officials say the limited U.S. role in Libya falls short of the law's scope Washington (CNN) -- The White House defended to Congress on Wednesday the legality, the costs and accomplishments of the U.S. military mission in Libya. In a 32-page report titled "United States Activities in Libya," the administration says the cost of military and humanitarian operations through June 3 was about $800 million. It estimates the total cost through September 30 will be $1.1 billion. The report was drawn up in response to a House resolution that accused President Barack Obama of failing to consult with Congress over the military effort in the North African country. Rep. Kucinich: If it looks like war, it's war Is Libya mission unconstitutional? Rep.

The Third Wave Background to the Third Wave experiment[edit] The experiment took place at Cubberley High School in Palo Alto, California, during the first week of April 1967.[1] Jones, finding himself unable to explain to his students how the German population could have claimed ignorance of the extermination of the Jewish people, decided to demonstrate it to them instead.[3] Jones started a movement called "The Third Wave" and told his students that the movement aimed to eliminate democracy.[1] The idea that democracy emphasizes individuality was considered as a drawback of democracy, and Jones emphasized this main point of the movement in its motto: "Strength through discipline, strength through community, strength through action, strength through pride."[1] The experiment was not well documented at the time. Chronology[edit] First day[edit] The first day's session was closed with only a few rules, intending to be a one day experiment. Second day[edit] Third day[edit] Fourth day[edit] In psychology[edit]