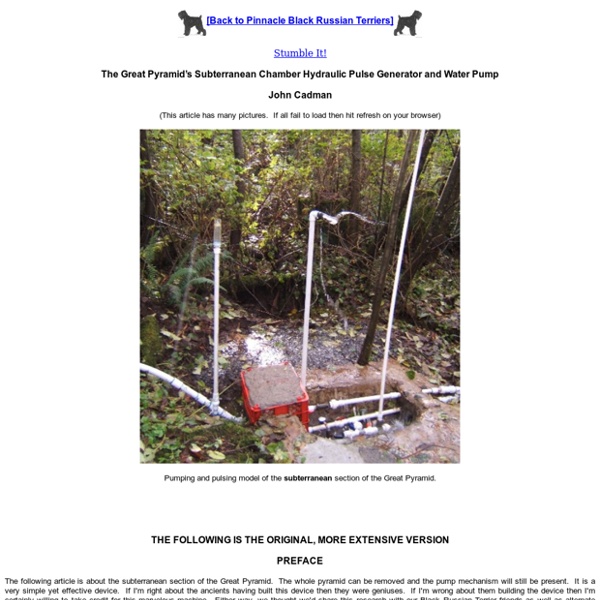 [Back to Pinnacle Black Russian Terriers] Stumble It! The Great Pyramid’s Subterranean Chamber Hydraulic Pulse Generator and Water Pump John Cadman (This article has many pictures. Pumping and pulsing model of the subterranean section of the Great Pyramid. The following article is about the subterranean section of the Great Pyramid. This research has been published in Dr. Do you know what 0.0001" looks like? The machine that I'm proposing is not out of the realm of what the pyramid builders have shown that they could produce. FIGURE 1. The causeway from the Great Pyramid can be seen leading down to the location of the ancient Nile River. Fluffy Egyptology has been polarized into two primary factions. The oral indigenous teachings state: Did these buildings actually come from an earlier time of a more advanced civilization? The use of the Great Pyramid's subterranean layout produces the best and most advanced hydraulic ram pump ever built. FIGURE 2. FIGURE 3. FIGURE 4. FIGURE 5. FIGURE 6. [1.]

Vortex Water Revitalizers - benefits for the whole home - Dancing with Water Vortex Water Revitalizers (VWRs) use Mother Nature’s vortex to bring the life back to the water in your whole home. It’s like having your own little river running through the water lines. VWRs split the incoming water and send it through a double spiraling vortex. In addition to structuring, VWRs have a softening effect on water. In the shower Many people report improvements in skin, hair and nails after the installation of a VWR (softer, smoother, more hydrated skin; less brittle hair and nails). In the Kitchen Water treated with a VWR has been noted to improve the taste and freshness of fruits and vegetables washed before storage in the refrigerator. For plants and soil Houseplants, fruit, vegetables, lawns and trees will thrive on water treated with a VWR. Contaminants Although VWRs are not water filters and they should not be counted on to remove contaminants, they have been shown to reduce some bacteria and contaminants, including E Coli, coliform, chlorine and nitrates.

liens sur la poursuite des travaux de Shauberger Hydraulic Engineering Head: Prof. Gerald Zenz Sustainable economic activity through the utilization of renewable energies, as well as the preservative interaction with the environment and infrastructure pose challenges to hydraulic engineering and water resource management. The risk assessments for, and the protection of existing infrastructure are regional tasks and a central subject of hydraulic engineering. These challenges are met actively with research, physical and numerical modelling, and experience with the performance of hydro-power plants. Founded in 1865, the Institute of Hydraulic Engineering and Water Resources Management in the Graz University of Technology looks back on a long tradition. Teaching Research Consulting Hydraulic scale-model testing

Microwave Test – an eye opener Below is a Science fair project presented by a girl in a secondary school in Sussex. In it she took filtered water and divided it into two parts. The first part she heated to boiling in a pan on the stove, and the second part she heated to boiling in a microwave. Then after cooling she used the water to water two identical plants to see if there would be any difference in the growth between the normal boiled water and the water boiled in a microwave. She was thinking that the structure or energy of the water may be compromised by microwave. As it turned out, even she was amazed at the difference, after the experiment which was repeated by her class mates a number of times and had the same result. It has been known for some years that the problem with microwaved anything is not the radiation people used to worry about, it’s how it corrupts the DNA in the food so the body can not recognize it. Microwaves don’t work different ways on different substances. 1). 2). 3). 4). 5). 6). 7). 8). 9).