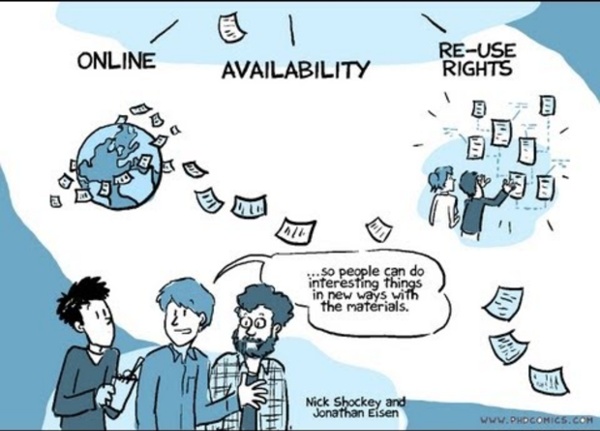 Academics share copyrighted journal articles on Twitter to honor Aaron Swartz This morning, hundreds of links to copyright-protected journal articles have appeared on Twitter in remembrance of Aaron Swartz, posted by members of the academic community. The call to the protest appears to have started on Reddit, where researcher Micah Allen said, "a fitting tribute to Aaron might be a mass protest uploading of copyright-protected research articles. Dump them on Gdocs, tweet the link. Think of the great blu-ray encoding protest but on a bigger scale for research articles." Early this morning the Anonymous Twitter account also announced its support for the action. Please share: Academics posting their papers online in tribute to Aaron Swartz using hashtag #pdftribute #ICYMI — Anonymous (@YourAnonNews) January 13, 2013

Labs' Central Nervous System for the Earth project aims to build a planetwide sensing network: HP Labs Feature Article (November 2009) In the first commercial application of CeNSE technology, HP and Shell will build a wireless sensing system to acquire high-resolution seismic data. By vastly improving the quality of seismic imaging, the new system will allow Shell to more easily and cost-effectively explore difficult oil and gas reservoirs. The ground-breaking solution will be delivered by HP Enterprise Services, and will include HP’s high-performance sensing technology, a recent breakthrough from HP Labs and the company’s Imaging and Print Group. The solution will provide a better picture of existing and alternative energy resources – allowing Shell to perform more targeted oil exploration and reduce their environmental impact. » Learn more Earth calling: Turn off the lights!

ClipArt ETC: Free Educational Illustrations for Classroom Use Alphabets The Alphabets ClipArt collection offers 1,193 illustrations arranged in 43 galleries including decorative letters and numerals, complete alphabet sets, and several sign language systems. If you are looking… American History and Government Gold or green: which is the best shade of open access? Going for gold is the solid approach, argues Michael Mabe...but David Price counters that only green is sustainable Gold standard just right in the 'Goldilocks zone' Michael Mabe hails the Finch report's consensus-building and its pragmatic support for the 'pay-to-publish' open-access model Dame Janet Finch has my admiration and my sympathies.

Researchers begin posting article PDFs to twitter in #pdftribute to Aaron Swartz « Neuroconscience Yesterday, as I was completing my morning coffee and internet ritual, @le_feufollet broke the sad news to me of Aaron Swartz’s death. Aaron was a leader online, a brilliant coder and developer, and sadly a casualty in the fight for freedom of information. He was essential in the development of two tools I use every day (RSS and Reddit), and though his guerilla attempt to upload all papers on JSTOR was perhaps unstrategic, it was certainly noble enough in cause. Before his death Aaron was facing nearly 35 years in prison for his role in the JSTOR debacle, an insane penalty for attempting to share information. We don’t know why Aaron chose to take his life, but when @la_feufollet and I tried to brainstorm a tribute to him, my first thought was a guerilla PDF uploading campaign in honor of his fight for open access. I’m not much of an organizer, so I posted in one of the many rising reddit threads and hoped for the best:

A Resource Based Economy - the Beginning - by Dror Hilman -In a world of accelerated and unexpected development, we should start to separate from the models that dominated society over the past century, and get ready for a dramatic change. What will the new paradigm look like? It is impossible to predict exactly. Students: copycat, sort of One way I often suggest to my students to improve their writing ability is to read a lot. When doing so, I suggest they notice how writers use grammar, vocabulary, punctuation and organisation. I recommend trying to incorporate these samples into their own writing.

Openness has won - now what? As we start the new year and survey the open education landscape, it's hard not to conclude that openness has prevailed. The victory may not be absolute, but the trend is all one way now - we'll never go back to closed systems in academia anymore than we will return to the Encyclopedia Brittanica. Whether it's open access publishing, open data, MOOCs, OERs, open source or open scholarship - the openness battle has largely been won. Farewell to Aaron Swartz, an extraordinary hacker and activist Yesterday Aaron Swartz, a close friend and collaborator of ours, committed suicide. This is a tragic end to a brief and extraordinary life. Aaron did more than almost anyone to make the Internet a thriving ecosystem for open knowledge, and to keep it that way. His contributions were numerous, and some of them were indispensable. When we asked him in late 2010 for help in stopping COICA, the predecessor to the SOPA and PIPA Internet blacklist bills, he founded an organization called Demand Progress, which mobilized over a million online activists and proved to be an invaluable ally in winning that campaign.