Fundamental Principles of the Metaphysic of Morals, by Immanuel Kant, 1724-1804 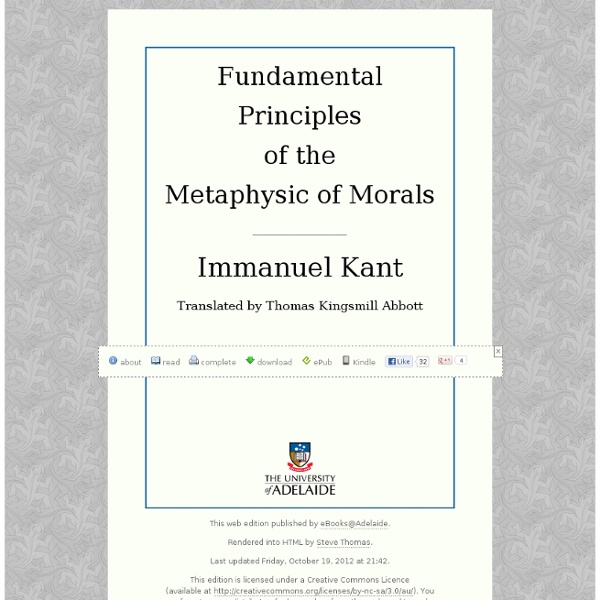 The Occult - Occultopedia: The Occult and Unexplained Encyclopedia Welcome to Occultopedia, the premier internet index of the paranormal, occult and inexplicable. In addition to being the foremost online destination for information about the supernatural, unusual phenomena and the occult, Occultopedia also features a variety of resources for the pagan community, new age buffs, unexplained phenomena enthusiasts, curious minds, and skeptics as well.Occultopedia is the genuine article, the original and the best internet index of the extraordinary and uncanny, shamelessly copied by many, but never equaled. Online since 1995 — at first in a free web space provider, and in 1997 finally with its own domain name and hosting — Occultopedia still is the principal online resource for those looking for the unexplained, the curious and the unusual. Occultopedia is a work in progress, and is not completed.

Society for Psychical Research From the publisher’s website: For thousands of years, voyagers of inner space—spiritual seekers, shamans and mystics—have returned from their inner travels reporting another level of reality that is more real than the one we inhabit in waking life. Others have claimed that under the influence of mysterious substances, known as entheogens, the everyday human mind can be given glimpses of this multidimensional realm of existence. Using information from the cutting edge of modern science, Peake presents a startling new hypothesis that these “inner worlds” are as real, or possibly even more real, than the “reality” we experience in waking life. As his starting point, Peake examines the widespread historical belief that the mid-brain’s pine-cone shaped pineal gland activates the “third eye” described by mystics and seers.

Chakra system chart - by astrology - chakra chart/chakras charts - Planetary influences on chakra system Planetary influences on chakra system Introduction to the chakra system The human energetic system is mainly composed of a vertical energetic axis which runs through our spine from the perineum (the region between the genitals and the anus), up to the top of our head. This is our main energetic channel and it is called in India the Sushumna Nadi. On this channel, at different levels there are seven energetic centers (named chakras) that represent our link to the "reality" and the universe(s). They are located as shown in the image on the right. Chakra system chart by astrology One can identify the nodal axis with Sushumna Nadi, the energetic central channel that runs through our spine. The other six chakras will be projected on the nodes' axis as follows: 1. 2. 3. 4. 5. 6. Planets that are in the projection area of one chakra will influence that chakra according to their nature and the side of the nodal axis where they are located. the Seven chakras system Ideal chakra chart And so on.

Internet Sacred Text Archive Home Mercury Retrograde MERCURY RETROGRADE: The purpose of Mercury retrograde is to review and revise our life and our connection with reality. The timing of this universe is geared toward the Sun as it moves through the zodiac. Mercury has an orbit that at times gets ahead of the Sun allowing us to look into the future toward new and innovative ideas. However, we cannot continue in that vein until we come back to the present designated by the Sun and put our new ideas into manifestation. During the time that Mercury jumps ahead, we ultimately have to bring the ideas back into the present to test and evaluate to see how they fit into our life. As Mercury retrogrades back into the present, the connection with the Sun happens as we test drive our ideas and re-align with reality and the natural timing of the universe. The best mode to be in during a Mercury retrograde is one of "non-reaction", and with earth signs being impacted, physical environment will be changing continually during a Mercury retrograde.

EZ Chakra Spin This meditation only takes a few minutes, and can be done at any time when you are able to tune in and focus. It is easy to do and can take the place of a full or extended meditation for people who lack the necessary privacy and/or are short on time. Turn your attention to the base of your spine and visualize your base chakra as a vortex [like a small pyramid]. Visualize this chakra a rich vibrant red and spin it. Work your way up through each chakra, visualizing each one and spinning it until it spins fast and on its own. When you spin the 6th chakra, focus *behind* your 3rd eye, in the middle of your head. Each of your chakras should be a powerful vibrant color. When our chakras spin at a faster rate, this helps to protect us from misfortune and disease, opens us to the astral, and protects us astrally as well as in the physical world. Also, note that the soul is made of light. © Copyright 2005, 2009, 2013, Joy of Satan Ministries; Library of Congress Number: 12-16457

Herbalism, Medieval, Magickal and Modern Disclaimer: please read Aunt Bunny's Herbal Safety Rant; this is NOT a medical advice site! (Primarily directed at Society for Creative Anachronism members- by Jadwiga Zajaczkowa/Jenne Heise) Class Handouts Making Herbal Preparations An outline of instructions for creating various basic herbal preparations Scents of the Middle Ages A handout for a class on various uses of scented materials in the Middle Ages Making Medieval-style Scented Oils and Waters A handout and background for a hands-on class. Hair Care Recipes Some pre-17th c. recipes for hair care products and treatments. Herbal Sallets and Green Pottages A handout for a class on raw and cooked greens as food, pre 1650. Making Medieval Mustards Class notes: medieval mustard recipes, instructions on making your own mustard from scratch. Making Mustard the Medieval Way-- A Youth class Instructions and handout for a class directed at pages and children's program Spices from the East Class handout for a class on spices, last updated 2/11/01 Recipes

Spirituality and Nature I think you came here with some expectation, bur essentially I've nothing to offer you. Simply, I'll try to share some of my own experiences and my views. You see, taking care of the planet is nothing special, nothing sacred, and nothing holy. It is something like taking care of our own house. We human beings, what is wrong with us? From a certain viewpoint, religion is a little bit of a luxury. If we practice religion properly, or genuinely, or religion is not something outside but in our hearts. If we look closely at human nature affection is the key to a good heart.

Dion Fortune:: Golden Dawn Tradition Occult Dion Fortune - In the Golden Dawn Tradition Ritual magician and occult author Dion Fortune was born Violet Mary Firth, on 6th December 1890, in Bryn-y-Bia, Llandudno, North Wales. In the summer of 1911, when Violet was twenty, her parents decided to enrol her at a residential college. Violet's two years at Studley College were on the whole happy, she learnt the craft of horticulture and also had a chance to develop her literary talents, contributing to plays celebrating the Warden's birthday. A 'Psychic Attack' Violet decided to leave the establishment and went to the Warden's office one morning to announce her departure. After the incident Violet's parents took her away from Studley College. One day out of sheer curiosity and loaded with scientific scepticism she attended a lecture on mental telepathy at the centre. Violet's interest now aroused, things were to get even stranger. A Natural 'Psychic'? This she did and in 1919 joined an occult order run by Theodore Moriarty.