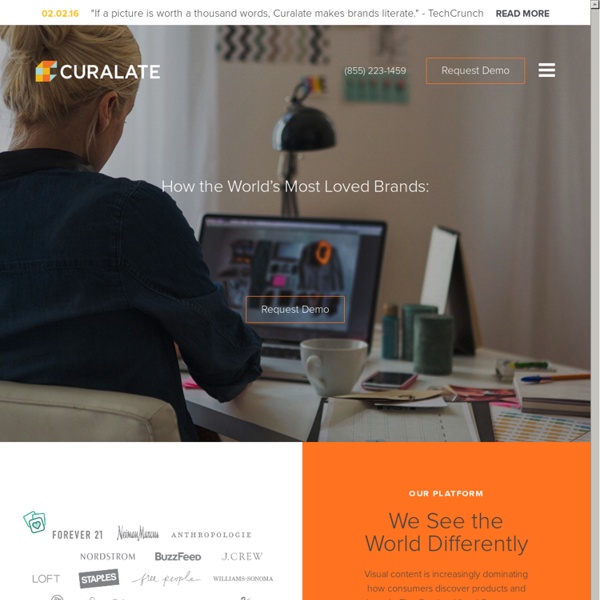 Curalate is the world's leading marketing and analytics suite for the visual web, starting with Pinterest, Instagram, and Tumblr. We help brands tell their story through imagery in order to fuel consumer engagement, build brand awareness, and drive revenue across various business verticals, including marketing, advertising, ecommerce, and merchandising. Our team consists of startup veterans, social media savants, pixel pushers, and big-data bosses located in both New York City and Philadelphia. Oh, and we're building a platform that’s already in use by more than 400 of the world’s leading brands. Still hungry for more? The kitchen's always open: hello@curalate.com

Nostalgia—Well, There's An App For That Too Everyone loves the feeling of happening upon a long forgotten photo, but this experience has unfortunately become increasingly rare. Those awesome pangs of nostalgia are hard to come by with the uber-accessibility of our photos online. But a genius new iPhone app has found a way to recapture that feeling. Throwback, developed by Pang Labs, allows you to capture images with your iPhone. But instead of storing them on your device, or uploading them to a digital album where everyone including you can access them whenever, the pictures disappear only to reappear at a later date.The app actually returns your images to you anywhere from one week to five years down the line. E-Commerce Trends: Selling and Shopping Via Social Media Earlier this year, leaked images from online retailer Fancy.com showed a mock-up of a new platform called Twitter Commerce. These branded tweets, which look just like normal tweets, can be expanded to reveal a Buy button that allows consumers to make a purchase from within the Twitter app. When tech news site Re/code broke the news in late January, the article made it clear that Twitter Commerce had no set launch date or pricing information. There wasn't even an official comment from a Twitter representative about the new platform. But since the leak, there's been a lot of speculation from retailers, marketers and potential investors about this giant leap toward the future of e-commerce.

Should You Use Hashtags on Facebook? Here’s What the Research Says ​Hashtags are one of the most commonly queried elements of social media marketing, particularly amongst people just starting out. And that makes sense – hashtags can be confusing as they’re not words within a sentence, necessarily, but topic matches that help improve discoverability. Some people think tagging every word will help, because it’ll mean your content will show up in more conversations, but that’s a flawed theory.

5 Things You Should Avoid Posting On LinkedIn Do you ever pause just before hitting the Share button when posting on LinkedIn? Have you ever wondered if what you're about to post will hurt or improve your personal brand and authority on LinkedIn? It can be hard to know what are the best kinds of content to post and which you should avoid, especially when the topic is current, relevant and, perhaps, even controversial. While controversial posts will often get the most engagement and comments, do you really want people to associate that topic or content with you? You may even be thinking that if you just share the post and don't provide your own opinion or comment that people won’t think that you're for or against a particular side. But often just by posting, your connections will make assumption and form an opinion, which may or may not be in your favor.

JA-tracks images across the web. like how it labels the source with a simple icon (e.g. twitter) by jasonanderson2 May 20