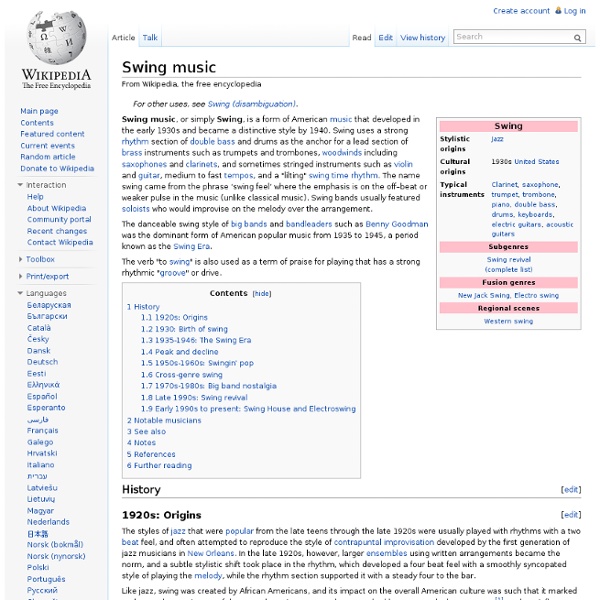 History[edit] 1920s: Origins[edit] Like jazz, swing was created by African Americans, and its impact on the overall American culture was such that it marked and named an entire era of the USA, the swing era – as the 1920s had been termed "The Jazz Age".[1] Such an influence from the black community was unprecedented in any western country.[1] Swing music abandoned the string orchestra and used simpler, "edgier" arrangements that emphasized horns and wind instruments and improvised melodies. Louis Armstrong shared a different version of the history of swing during a nationwide broadcast of the Bing Crosby (radio) Show.[2] Crosby said, "We have as our guest the master of swing and I'm going to get him to tell you what swing music is." 1930: Birth of swing[edit] 1935-1946: The Swing Era[edit] Benny Goodman, one of the first swing bandleaders to achieve widespread fame. The period between 1935 and 1946 is when big band swing music reached its peak and was the most popular music in America.

Big band A big band is a type of musical ensemble that originated in the United States and is associated with jazz and the Swing Era typically consisting of rhythm, brass, and woodwind instruments totaling approximately 12 to 25 musicians. The terms jazz band, jazz ensemble, jazz orchestra, stage band, society band, and dance band may describe this type of ensemble in particular contexts. Instrumentation[edit] Typical seating diagram for a big band. A standard 17-piece instrumentation evolved in the big-bands, for which many commercial arrangements are available. This instrumentation consists of five saxophones (most often two altos, two tenors, and one baritone), four trumpets, four trombones (often including one bass trombone) and a four-piece rhythm section (composed of drums, acoustic bass or electric bass, piano and guitar). Some arrangements call for saxophone players to double on other woodwind instruments, such as flute, clarinet, soprano sax, or bass clarinet. History and style[edit]

Traditional pop music Traditional pop (also classic pop or pop standards) music consists of Western (and particularly American) popular music that generally predates the advent of rock and roll in the mid-1950s. Introduction[edit] Traditional/classic pop music is generally regarded as having existed between the mid-1940s and mid-1950s. Allmusic defines traditional pop as "post-big band and pre-rock & roll pop music." This definition is disputed by many scholars, however, as many of the most enduring and popular standards predate World War II, as for example most of the work of Cole Porter and George and Ira Gershwin—and in some cases, as with Irving Berlin and Jerome Kern, even World War I. Traditional pop music is often regarded as having enduring appeal, possessing certain ineffable qualities, including but not limited to an ease and memorability of melody, as well as wit and charm of lyric. Origin[edit] Mid-1940s to mid-1950s: Height of popularity[edit] Late 1950s to 1960s: Decline of traditional pop[edit]

Great American Songbook The Great American Songbook is a term used to denote the canon of the most important and most influential American popular songs of the 20th century – principally from Broadway theatre, musical theatre, and Hollywood musical film. These enduring songs are from the 1920s through the 1950s, and include dozens of songs of enduring popularity. Definition[edit] Richard Rodgers and Lorenz Hart In one 1972 study of the canon, American Popular Song: The Great Innovators, 1900–1950, songwriter and critic Alec Wilder provided a list of the artists he believes belong to the Great American Songbook canon, as well as his ranking of their relative worth. A composer himself, Wilder's primary emphasis is analysis of composers and their creative efforts.[1] Songwriters and songs[edit] There is no definitive list of musicians and lyricists whose work constitutes the Great American Songbook, but the following writers and songs are often included: Style and structure[edit] Style[edit] Structure[edit] Singers[edit]

Show tune A show tune is a popular song originally written as part of the score of a "show" (or stage musical), especially if the piece in question has become a "standard", more or less detached in most people's minds from the original context. Particular musicals that have yielded "show tunes" include: Though show tunes vary in style, they do tend to share common characteristics—they usually fit the context of a story being told in the original musical, they are useful in enhancing and heightening choice moments. Show tunes were a major venue for popular music before the rock and roll and television era; most of the hits of such songwriters as Jerome Kern, Cole Porter, and George Gershwin came from their shows. Although show tunes no longer have such a major role in popular music as they did in their heyday, they maintain somewhat popular, especially among niche audiences. Bibliography[edit] Green, Stanley. References[edit] External links[edit] Show Tunes at allmusic.com