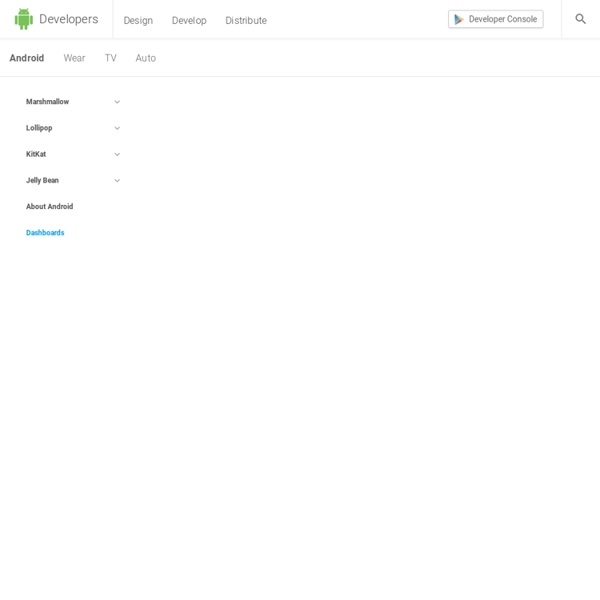 Google Play Install Stats The Google Play Developer Console also provides detailed statistics about your users' devices. Those stats may help you prioritize the device profiles for which you optimize your app. This page provides information about the relative number of devices that share a certain characteristic, such as Android version or screen size. This information may help you prioritize efforts for supporting different devices by revealing which devices are active in the Android and Google Play ecosystem. This data reflects devices running the latest Google Play Store app, which is compatible with Android 2.2 and higher. Platform Versions This section provides data about the relative number of devices running a given version of the Android platform. For information about how to target your application to devices based on platform version, read Supporting Different Platform Versions. Data collected during a 7-day period ending on February 1, 2016. Screen Sizes and Densities

Android Google Maps Tutorial Part 1. Basic Development. « Mir This tutorial is first of the detailed tutorial that am planning to write. Some short details about my development environment. Windows 7 ProfessionalAndroid 2.3.3(API10)Google APIs (Google Inc)-API Level 10. (Create AVD of this API)Eclipse Classic version 3.7.0 Before we start with the development of our first Google Maps Application for Android. Perform all the steps in the above link and get the key. Start a new Android Project, when prompted for SDK selection SDK selection Select Google APIs Platform 2.3.3 API level 10, and move next. Now change the line to Now open the main.xml file and add a MapView <com.google.android.maps. Save the changes. Now add the google maps library in the manifest file, inside the application tag above the activity tag. Save the changes. Creating & Configuring New AVD Run Configuration For Our Android Project Selected Target AVD Google Maps Empty Grid with <?

Here's How Bad Android's Fragmentation Problem Is [GRAPHIC] When Google first launched Android, the open-source operating system came with the promise that it could power almost any device. That's created a proverbial cornucopia of mobile devices that consumers have to choose from, but it's also led to the issue of fragmentation — there are so many devices running different versions of Android with different capabilities that can alter experience. Just how bad is the problem? The site Open Signal Maps studied fragmentation in detail, gathering data from 195 countries, and it put its findings in easy-to-discern graphics. The main takeaways: Yes, fragmentation is huge, with 3,997 devices, but it's also a blessing that has led to the platform becoming the No. 1 mobile OS in the world by far. From the graphic above, it's clear Samsung is the king of the mountain among Android devices. The graphic below shows that the Samsung Galaxy S II smartphone is the most popular device, making it the world's most popular Android phone.

Designing For Android For designers, Android is the elephant in the room when it comes to app design. As much as designers would like to think it’s an iOS1 world in which all anyones cares about are iPhones, iPads and the App Store, nobody can ignore that Android currently has the majority of smartphone market share2 and that it is being used on everything from tablets to e-readers. In short, the Google Android platform is quickly becoming ubiquitous, and brands are starting to notice. But let’s face it. Further Reading on SmashingMag: Link If all this feels discouraging (and if it’s the reason you’re not designing apps for Android), you’re not alone. This article will help designers become familiar with what they need to know to get started with Android and to deliver the right assets to the development team. Android Smartphones And Display Sizes Link When starting any digital design project, understanding the hardware first is a good idea. 10Two common Android screen sizes. Advertisement Dashboard Link

Google Play Developer 8-Step Checkup Posted by Ellie Powers, Google Play team Google Play gives you tons of options on publishing your apps and connecting with users. But as you get started with new features like beta testing and staged rollouts, it’s a good idea to do a checkup and make sure you’ve covered the basics. 1. Boost your developer account security If you take just one step today to protect your Google Play apps, enable two-step authentication for your Google account, and encourage the rest of your team to do the same.Next, many developers first set up their Google Play account with their personal gmail account, but it’s actually a good idea to transfer your apps to a separate account. 2. In order to publish an update to an existing app, you’ll need to sign it with the same keystore every time. 3. As a developer, you are responsible for checking two important email addresses: 4. We recently launched some new guides and examples for Google Play’s Developer Program Policies and Developer Distribution Agreement. 5.

Maps - Android Fragmentation Visualized The many faces of a little green robot August, 2012 Fragmentation matters to the entire Android community: users, developers, OEMs, brands & networks. It's a blessing and a curse. The Blessing. The Curse. The Study. Some of the Android devices we use to test OpenSignalMaps Model We've spotted 3997 distinct devices. One complication is that custom ROMs can overwrite the android.build.MODEL variable that we use for the device model. Brand Android brands are almost as fragmented as device models, indicating just how much easier it has become to source electronics. Some highlights: 2 tablets have been spotted sporting the ill-fated FusionGarage brand, 7 with Polaroid's smart-camera. The clear winner is Samsung again with 270,144 devices - or 40% of the market as seen by us. API Level API level - or Android version (e.g. Resolution Each point represents a particular resolution e.g 480*800, note the constancy of the line that represents the most common aspect ratio 5:3. Scale 2:7 <3 Fragmentation?

Supporting Different Screens Android categorizes device screens using two general properties: size and density. You should expect that your app will be installed on devices with screens that range in both size and density. As such, you should include some alternative resources that optimize your app’s appearance for different screen sizes and densities. There are four generalized sizes: small, normal, large, xlarge And four generalized densities: low (ldpi), medium (mdpi), high (hdpi), extra high (xhdpi) To declare different layouts and bitmaps you'd like to use for different screens, you must place these alternative resources in separate directories, similar to how you do for different language strings. Also be aware that the screens orientation (landscape or portrait) is considered a variation of screen size, so many apps should revise the layout to optimize the user experience in each orientation. Create Different Layouts Note: Android automatically scales your layout in order to properly fit the screen.

The shocking toll of hardware and software fragmentation on Android development Android fragmentation is a huge problem. The fact that there are hundreds of different hardware devices running over half a dozen different versions of Google’s OS makes it annoying for users, but makes it an especially devastating issue for developers trying to make a business out of the Android ecosystem. This was highlighted by the recent release of Temple Run on the Android platform. A previously (very) successful game on iOS, it was brought over to Android in order to take advantage of the huge number of devices that run the OS. 99.9% of support emails are complaining their device isn’t supported. Natalia Luckyanova of Imangi tweeted out that most of their 1200 emails over the past 12 hours of release had been devoted to the fact that the app just didn’t work on one of the hundreds of devices owned by those users. But then Developer David Smith replied to her, saying that he had some 1443 unique devices on the logs for his Android app Audiobooks (also Free).

Iconography An icon is a graphic that takes up a small portion of screen real estate and provides a quick, intuitive representation of an action, a status, or an app. When you design icons for your app, it's important to keep in mind that your app may be installed on a variety of devices that offer a range of pixel densities, as mentioned in Devices and Displays. But you can make your icons look great on all devices by providing each icon in multiple sizes. Because you will deliver each icon in multiple sizes to support different densities, the design guidelines below refer to the icon dimensions in dp units, which are based on the pixel dimensions of a medium-density (MDPI) screen. So, to create an icon for different densities, you should follow the 2:3:4:6:8 scaling ratio between the five primary densities (medium, high, x-high, xx-high, and xxx-high respectively). Launcher The launcher icon is the visual representation of your app on the Home or All Apps screen. Sizes & scale Proportions Style Colors

Android Development: In practice, how bad is Android fragmentation for developers that are targeting multiple devices