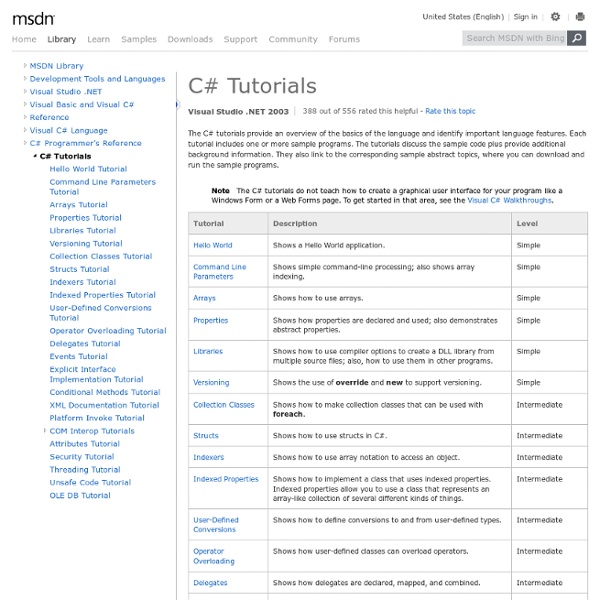 Spring 3 Tutorials The Spring Framework is an open source application framework and Inversion of Control container for the Java platform. This page lists down all tutorials on this website available on this topic. This page will be updated everytime, I will write any post on Spring 3. Feel free to suggest topics you want to read more on. Hello world application Delegates Tutorial (C#) This tutorial demonstrates the delegate types. It shows how to map delegates to static and instance methods, and how to combine them (multicast). Sample Files Further Reading Tutorial Amazing Retro Flyer Designs For Designers Inspiration Today’s inspiration and design ideas comes in the form of some well designed retro flyers and posters. A flyer is very practical instrument to introduce new products and services of every company / organization in the local marketplace. Flyers and posters are also very trending in party invitations. If you’re after a retro design for your event, then here is a collection of cool vintage flyer design inspirations. Check them out!

How to make an Adventure Game This article will cover what goes into the programming of an adventure game. The ideas will mostly be implementation agnostic but where code is provided or implementation specifics are discussed they use the Engine project from my book C# Game Programming as a base. All the code is available online under the MIT license. The ideas covered here are widely applicable, navigation meshes very much like the one described are used in games such as Baulder's Gate, Planescape Torment etc. and with very little tweaking such navigation meshes can be used for 3D games, inventory and dialogue systems are also common in games with RPG elements. What are Point and Click adventure games? Point and click adventure games were a popular genre of games in the early 1990s and have recently started to make a bit of a come back.

Students create an account and verify your student status Although some products are accessible immediately, in order to download the same tools and products used by professional developers you need to create a student account and verify your academic status the first time you access DreamSpark. Your account will be valid for 12 months. Individual Account Sonic Physics Guide - Sonic Retro ROM Hacks make the process of developing a functional Sonic game with unique art, enemies, and modifications much easier, since the game engine and basic mechanics are already functional. However, if the game requires a different game engine, modifying existing low-level assembly may be inappropriate, and some game designers might choose to program their own unique game engine. The physics of a game engine are rules that describe how to transform the player's input (either in the form of buttons, keyboard, or even a mouse if the designer feels inclined) into appropriate changes in the position of the sprites in the game (such as the Sonic sprite, or alternatively, how enemy sprites will respond). These physics guides will hopefully make the process of simulating the rules used in Sonic games easier. Since the rules themselves are independent of how they are implemented, many people choose programming languages such as Java, C, C++, Python, or a Lisp dialect to implement game physics.

Customize Rollups Rollups consist of all the modules in Pure. There are two rollups available - a regular (responsive) one, and a non-responsive one. Python Loops There may be a situation when you need to execute a block of code several number of times. In general, statements are executed sequentially: The first statement in a function is executed first, followed by the second, and so on. Programming languages provide various control structures that allow for more complicated execution paths. A loop statement allows us to execute a statement or group of statements multiple times and following is the general form of a loop statement in most of the programming languages: Python programming language provides following types of loops to handle looping requirements. Click the following links to check their detail.

Examples of Pseudo-Elements Animations and Transitions *:before, *:after { box-sizing : border-box; .drop { Top 15 Stunning CSS3 Animation Effects Computer animation is a part of computer graphics and is in wild use today using which you can create moving objects and images using your PC. CSS 3 animations are used to push the HTML5 applications to a better level. Without seeking any kind of help from professional developers, the web designers can create beautiful and stunning animations using CSS3 animations. Your experience in creating animations will be easier hereafter because of the CSS3 animations. Many interesting experiments have been conducted till now to test the potential of the CSS3 animation scripts and the results are no doubt to be positive.

Boxing and Unboxing in C# .Net Posted by suhail banday under ASP.NET category on 5/1/2008 for Beginner level | Views : 14831 If you found plagiarised (copied) or inappropriate content, please let us know the original source along with your correct email id (to communicate) for further action. Rating: 4 out of 5 4 vote(s) In this article I will explain the concepts of Boxing and UnBoxing.

The C# Value Type and Boxing Even though with the .NET framework we don't have to actively worry about memory management and garbage collection (GC), we still have to keep memory management and GC in mind in order to optimize the performance of our applications. One of the things we need to be aware of is how the Common Language Runtime (CLR) deals with references to value types. When an instance of a value type is converted to a System.Object type or to an interface, the CLR needs to convert the value type to a valid reference type. Memory is allocated on the managed heap and the object is copied over. We need to be aware of this for two reasons: boxing is a very expensive process (copying a whole object from the stack to the heap uses up processor cycles and space on the managed heap) and we now have two objects in memory that can have conflicting states. Here is a simple example of boxing.

Development Center Development Status The current stable release is 1.10.4. Check out our Roadmap to find out what we're working on.