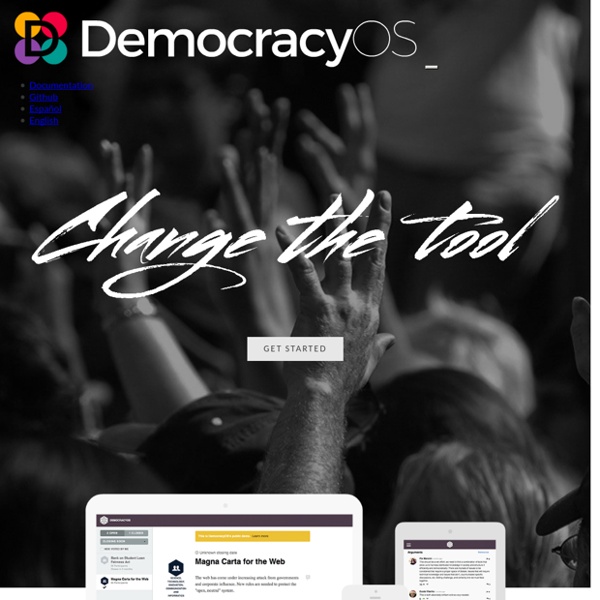 The Bitcoin of governance could be coming soon? From a discussion on the pho mailing list: “After late-night discussions with my classmates acknowledging this reality, six of us started a project called Bitgov which ?enables citizens to vote on proposed legislation anywhere and anytime, regardless of nationality. It aims to make it easy for people to understand legislation, but also to express their opinions and join in the decision-making process.

Propaganda - Wikipedia Form of communication intended to sway the audience through presenting only one side of the argument In the 20th century, the term propaganda was often associated with a manipulative approach, but historically, propaganda has been a neutral descriptive term.[1][2] A wide range of materials and media are used for conveying propaganda messages, which changed as new technologies were invented, including paintings, cartoons, posters, pamphlets, films, radio shows, TV shows, and websites.

Afuera, en el Apertura: Un sitio web de código abierto que le da a los votantes una plataforma para influir en los políticos This is the decade of the protest. The Arab Spring. The Occupy Movement. And now the student demonstrations in Taiwan. Argentine political scientist Pia Mancini says we’re caught in a “crisis of representation.” Ubuntu 14 Install · DemocracyOS/democracyos Wiki Note i did this off the top of my head after getting it working, there could be a typo so if something doesn't work then help fix this up Requirements To get started with DemocracyOS, you will need to have installed: MongoDB open-source document database.

For developers D-CENT develops an easy-to-use, open, modular and decentralised platform for large scale collaboration. We work together with a large number of citizens and developers across Europe. We utilize and promote open-source code, open specifications, interoperable technology, open data and open APIs. Le projet diaspora* Decentralization Instead of everyone’s data being held on huge central servers owned by a large organization, diaspora* exists on independently run servers (“pods”) all over the world. You choose which pod to register with, and you can then connect seamlessly with the diaspora* community worldwide. Find out more » Freedom

Two Swedish economists foresaw the backlash against globalisation – here’s how to mitigate it The first article in our series Globalisation Under Pressure looks at work from the 1930s that anticipated the backlash against globalisation. Economists Eli Heckscher (1879-1952) and Bertil Ohlin (1899-1979) died more than three decades ago. But it’s fair to assume that neither would have been surprised by the underlying causes of Donald Trump’s election as president of the United States, or Brexit for that matter. Their Heckscher-Ohlin (H-O) model of international trade – developed at the Stockholm School of Economics in the 1930s – clearly predicted today’s middle-class discontent bellowing at the ballot box. The two Swedes recognised the simple but too-often-overlooked soft underbelly of global trade and growth: prosperity doesn’t distribute evenly.

Out in the Open: Hackers Bring Lawmaking Into the 21st Century Seamus Kraft, founder of OpenGov Foundation. Photo: OpenGov Foundation. Have you ever thought you could do a better job writing the laws of our country than those jokers on Capitol Hill?