Noreena Hertz: How to use experts 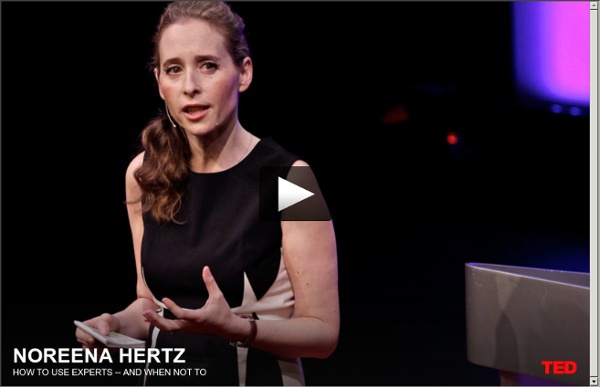 tips and downloads for getting things done @Blueluck: Very true - I've seen other countries where people leave their family in another country to go find work, and then to manual labor for extremely cheap just to be able to send it all home to their family. I guess that could be interpreted as their purpose, but the work is not purposeful in and of itself. I guess "pay enough to take money off the table" covers that, so we're only talking about how to motivate people after they're at the comfortable level most Americans that read this blog are at. Interesting results in India, though. I believe there is a threshold that once you're paid a certain amount, you feel on top of things like you deserve it, so you don't work hard to move up further. I think that's one reason government employees aren't known for super service. @Blueluck: Its completely subjective, is the answer.

WHAT WE DO IS SECRET | A Blog by A Lab on Fire via Marco Casagrande | Photo © AdDa Zei / Casagrande Laboratory Here is another fascinating project by Marco Casagrande and his team – “an architectural organism growing from the ruins of an abandoned farm-house in the jungle.” Photos » Drawings » Text » Model » (Don’t miss to checkout the models of this project at the link above!) Vortex Cannon Demolishes House « Wonderment Blog Jem Stansfield from BBC's Bang Goes the Theory has "put scientific theory to the test" with his Vortex Cannon. Filmed at 1300-fps, you can see the cannon knock down three different houses made of straw, stick, and brick with an explosive vortex ring. The vortex ring that comes out is not smoke, however. After detonating the explosive gas mixture of acetylene and oxygen, "one of the most dangerous gas mixes in the world," the ring forms from the pressure drop inside the vortex. It condenses the lake's damp air and shoots a cloud out at 200-mph, knocking down anything in its path. Stansfield's cannon is probably too big for the average do-it-yourselfer, but Edwin Wise from Make Magazine has a few garage-friendly vortex cannons - the Tub Thumper, Barking Tube, and Big Bad Boom Cannon. Get the full PDF instructions or see Kipkay in action below, building Wise's first two vortex cannons.

Don’t Be a PV Efficiency Snob 70 views this month; 0 overall A common question I get when discussing solar photovoltaic (PV) power is: “What is the typical efficiency for panels now?” When I answer that mass-market polycrystalline panels are typically about 15–16%, I often see the questioner’s nose wrinkle, followed by dismissive mumbling that 15% is still too low, and maybe they’ll wait for higher numbers before personally pursuing solar. A close-up of a polycrystalline photovoltaic (PV) cell, showing blue tint and a patchwork of crystal domains. First, let’s look at the efficiencies of other familiar uses of energy to put PV into perspective. Snark Attack So 15% is far too low for you? Perhaps you drive a car. Electric cars deliver battery-stored energy to the wheels at something like 85% efficiency. If you’re low on energy, you might consider eating. Perhaps you are a fan of biofuels. PV is Actually Rather Remarkable PV Basics A photovoltaic cell is most typically a slice of crystalline silicon 200—300 μm thick.

Eye Candy: Mesmerizing Swinging Balls Video Not mine -- mine are hypnotizing. This is a video of one of those swinging ball desk toys (aka Newton's Cradle) but with different length droopers (mine drag on the floor), creating all sorts of crazy-ass designs. I just watched it twice back to back (the second time with my eyes unfocused) and I'm pretty sure I spotted the secret to the universe at one point. Hit the jump for the worthwhile video but, WARNING: may cause dizziness. Youtube viaThe most beautiful video ever? Thanks to Church, who once mesmerized an entire living room full of bachelorette party attendees with his own swinging balls trick.

Zelda in Minecraft! Video Log in Video Games: Raw Cynthia Yildirim Zelda in Minecraft! Minecraft modder Gary520 has released a trailer to show off what is perhaps the blocky game’s most ambitious creation yet: an epic, 10-hour adventure based on The Legend of Zelda. posted 3 years ago jkconrad7 liked this csgrenke liked this adoormouse liked this greengoblin liked this Westley Cornwell liked this tylercorporation liked this Pol Gatsby liked this © 2014 Redux, Inc. about redux | contact us | copyright | legal where ART meets application! Footage of Japanese teenager scoring 128 consecutive 2-pointers on arcade game By Daily Mail Reporter Updated: 17:29 GMT, 20 November 2010 Most of us would be happy with landing a handful of two-pointers on an arcade basketball game. But this Japanese trick shot would clearly put most of us to shame after landing an astonishing 256 points in just 60 seconds. With a speed of shot that would embarrass most NBA players, the teenager rattles off 128 consecutive baskets without a single miss. Trick shot: A Japanese teenager lands 128 consecutive baskets in just 60 seconds at a game arcade Sign her up: Despite a member of staff emerging from the door on the right in her eye line, the teenager is undeterred before getting the record score And she is even unruffled after another gamer wanders past and a members of staff emerges from a doorway right in her line of vision. It is unclear whether the impressive feat is genuine, but the girl does appear to tire as she continues her prodigious scoring run. Beat that!