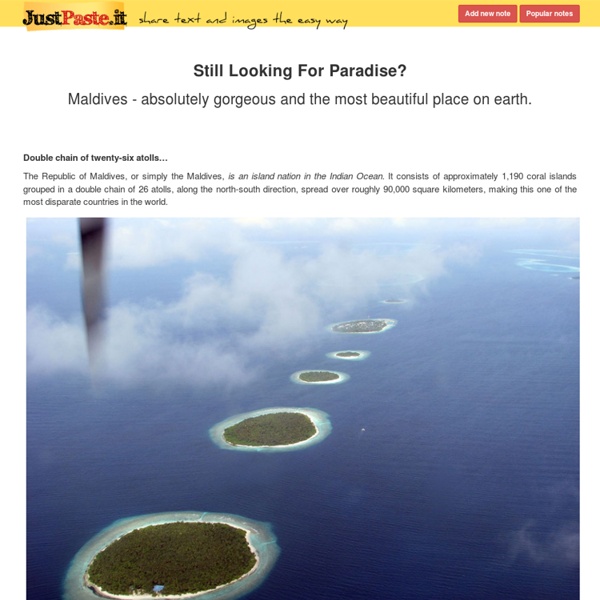 Double chain of twenty-six atolls… The Republic of Maldives, or simply the Maldives, is an island nation in the Indian Ocean. It consists of approximately 1,190 coral islands grouped in a double chain of 26 atolls, along the north-south direction, spread over roughly 90,000 square kilometers, making this one of the most disparate countries in the world. The atolls are composed of live coral reefs and sand bars, situated atop a submarine ridge 960 kilometers long that rises abruptly from the depths of the Indian Ocean and runs from north to south. Crystal clear waters, beautiful white sand beaches, swaying palm trees and fabulous dive sites – that’s why the Maldives, is known for being one of the best tropical holiday destinations in the world. ...and no need to climb ;) With an average ground level of 1.5 metres (4 ft 11 in) above sea level, it is the lowest country on the planet. Summer never ends ... Crystal clear waters and azure blue lagoons... Resorts in the Maldives

Most Beautiful Villages Around The World photo Popeye Village, is a group of rustic and ramshackle wooden buildings located at Anchor Bay in the north-west corner of the Mediterranean island of Malta. Photo by: Mosin Village on the bank of the Niger river, Mali. Photo by: Yann Arthus-Bertrand Hidden mountain village in Southern China. Photo by: Christian Ortiz

88 Brilliant Examples of Forced Perspective Photography Forced perspective is a technique that employs optical illusion to make an object appear farther away, closer, larger or smaller than it actually is. It is used primarily in photography, filmmaking and architecture. It manipulates human visual perception through the use of scaled objects and the correlation between them and the vantage point of the spectator or camera. There are many ways to attack photography and some are much more expensive than others. Journal of Neural Engineering Dominique M Durand et al 2014 J. Neural Eng. 11 020201 Neural engineers have made significant, if not remarkable, progress in interfacing with the nervous system in the last ten years. In particular, neuromodulation of the brain has generated significant therapeutic benefits [1–5]. EEG electrodes can be used to communicate with patients with locked-in syndrome [6].

40 Gorgeous Beach Photos, Beach Photography Examples Beach: Whenever you hear that word, thought of white and yellow sand; gorgeous sunset; beautiful chairs and smiling people passes your mind. Beaches are the only place where you just go to feel the nature, the strokes of the wind and to forget all your worries. You just want to live in the moment. The photographers aren’t any exception. 10 Most Famous Trees in the World Famous trees come and go. L’Arbre du Ténéré was once considered the most isolated tree on Earth, a landmark on caravan routes in the Sahara, until it was knocked down by a drunk Libyan truck driver in 1973. This year in August, the famous Anne Frank tree in Amsterdam was blown down by high winds during a storm. Luckily, there are still many special trees out there. An overview of the most famous trees in the world. 10Arbol del Tule

Switzerland Switzerland In June 2011, we spent a week in Switzerland, flying into Geneva, with an initial stop in Montreux, followed by a picturesque stay in Wengen, located above the Lauterbrunnen valley. The alps provided a stunning backdrop to explore the area. During our stay in Wengen, a small village that is accessible by train or foot, the main sound heard was cow bells. We took day trips and hikes in the Interlaken area of central Switzerland. The village of Wengen where we stayed in an alpine chalet/hotel, above the Lauterbrunnen valley.