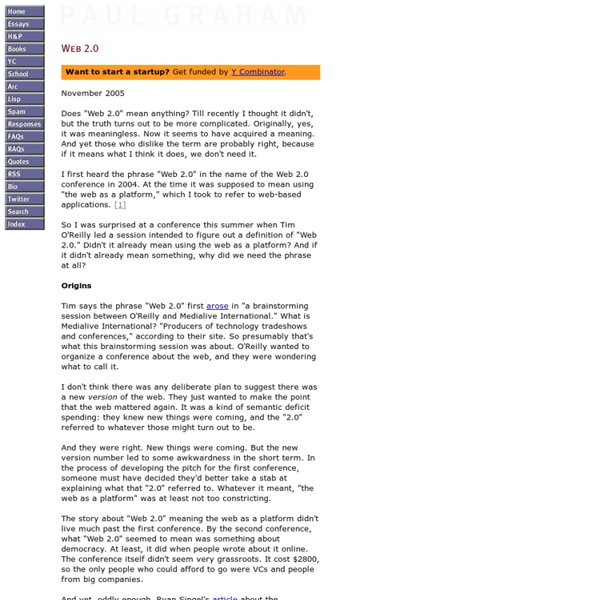 November 2005 Does "Web 2.0" mean anything? Till recently I thought it didn't, but the truth turns out to be more complicated. Originally, yes, it was meaningless. I first heard the phrase "Web 2.0" in the name of the Web 2.0 conference in 2004. So I was surprised at a conference this summer when Tim O'Reilly led a session intended to figure out a definition of "Web 2.0." Origins Tim says the phrase "Web 2.0" first arose in "a brainstorming session between O'Reilly and Medialive International." I don't think there was any deliberate plan to suggest there was a new version of the web. And they were right. The story about "Web 2.0" meaning the web as a platform didn't live much past the first conference. And yet, oddly enough, Ryan Singel's article about the conference in Wired News spoke of "throngs of geeks." Well, no. "Oh, that's Tim. The 2005 Web 2.0 conference reminded me of Internet trade shows during the Bubble, full of prowling VCs looking for the next hot startup. 1. 2. 3. Notes Related:  Explore

What is Ajax (Asynchronous JavaScript and XML)? - Definition from WhatIs.com Ajax (Asynchronous JavaScript and XML) is a method of building interactive applications for the Web that process user requests immediately. Ajax combines several programming tools including JavaScript, dynamic HTML (DHTML), Extensible Markup Language (XML), cascading style sheets (CSS), the Document Object Model (DOM), and the Microsoft object, XMLHttpRequest. Ajax allows content on Web pages to update immediately when a user performs an action, unlike an HTTP request, during which users must wait for a whole new page to load. For example, a weather forecasting site could display local conditions on one side of the page without delay after a user types in a zip code. Google Maps is one well-known application that uses Ajax. The interface allows the user to change views and manipulate the map in real time. Applications created with Ajax use an engine that acts as an intermediary between a user's browser and the server from which it is requesting information. Email Alerts

What Is Web 2.0 by Tim O'Reilly 09/30/2005 Oct. 2009: Tim O'Reilly and John Battelle answer the question of "What's next for Web 2.0?" in Web Squared: Web 2.0 Five Years On. The bursting of the dot-com bubble in the fall of 2001 marked a turning point for the web. Many people concluded that the web was overhyped, when in fact bubbles and consequent shakeouts appear to be a common feature of all technological revolutions. Shakeouts typically mark the point at which an ascendant technology is ready to take its place at center stage. The concept of "Web 2.0" began with a conference brainstorming session between O'Reilly and MediaLive International. In the year and a half since, the term "Web 2.0" has clearly taken hold, with more than 9.5 million citations in Google. This article is an attempt to clarify just what we mean by Web 2.0. In our initial brainstorming, we formulated our sense of Web 2.0 by example: The list went on and on. 1. Netscape vs.

Web 2.0 La rivoluzione siamo noi WebStorm 7 — Everything you need, at your fingertips, without compromise WebStorm 7 provides new tools to keep up with the latest and greatest web development innovations, helping you get more out of new technologies every day. Major Additions JavaScript Templates Support for EJS is now available in WebStorm 7. Enjoy EJS-specific syntax highlighting, typing assistance, formatting, and much more. WebStorm now understands .mustache and .hbs files and provides formatting and syntax highlighting for Handlebars and Mustache templates, as well as automatic tag closing. WebStorm 7 has initial support for the cutting-edge technology Web Components. Of course, you will also have full assistance with JavaScript and HTML while working on these templates. Stylesheets and JavaScript WebStorm 7 comes with basic support for Stylus stylesheet language. code completion formatting syntax highlighting automatic compilation to CSS For a more complete experience with Sass, there is now support for Compass. Built-in Tools Major Improvements IDE Improvements Versions History WebStorm 6.0

Web 2.0 World Wide Web sites that use technology beyond the static pages of earlier Web sites A tag cloud (a typical Web 2.0 phenomenon in itself) presenting Web 2.0 themes Web 2.0 (also known as Participative (or Participatory)[1] and Social Web)[2] refers to websites that emphasize user-generated content, ease of use, participatory culture and interoperability (i.e., compatible with other products, systems, and devices) for end users. The term was invented by Darcy DiNucci in 1999 and later popularized by Tim O'Reilly and Dale Dougherty at the O'Reilly Media Web 2.0 Conference in late 2004.[3][4][5][6] The Web 2.0 framework specifies only the design and use of websites and does not place any technical demands or specifications on designers. The transition was gradual and, therefore, no precise date for when this change happened has been given.[which?] History[edit] Web 1.0[edit] Some Web 2.0 capabilities were present in the days of Web 1.0, but were implemented differently. Characteristics[edit]

Caratteristiche delle applicazioni 2.0 STORM Web responsive design & development | ecommerce | content management | web hosting & domains Teach ICT What is web 2.0? What is it. This is a bit of an odd one, as there is no 'official' definition of this description. It seemed to appear in the media news when they wanted to describe a new phenomenon that appeared on the internet - namely web sites that were based on what members were placing on the site. For example YouTube is based almost entirely of material uploaded by members. Flickr became a hugely popular site for storing and sharing your photographs. Alternative open worlds appeared such as Second Life. Blogs have also become an important part of the Internet experience, with millions of individuals willing to share their thoughts, opinions and links. Another part of Web 2.0 is the rise in highly interactive features such as Google Maps. So perhaps a good definition of Web 2 is the point at which the Internet became truly interactive, with users becoming the most important component of many sites. I wonder what Web 3 will look like?