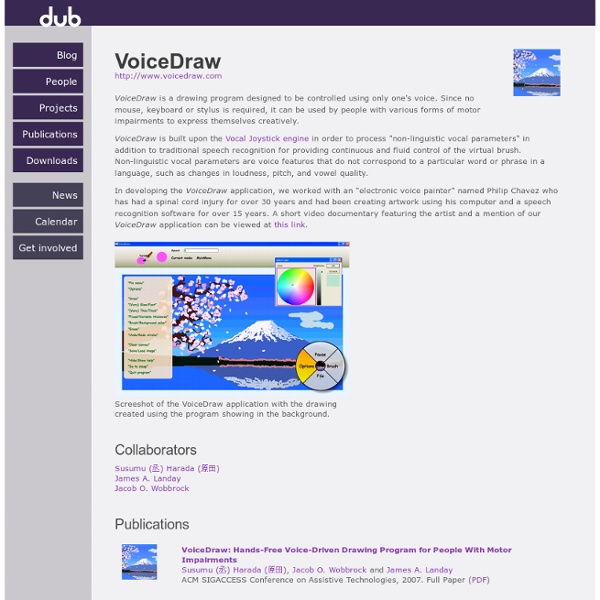 VoiceDraw is a drawing program designed to be controlled using only one's voice. Since no mouse, keyboard or stylus is required, it can be used by people with various forms of motor impairments to express themselves creatively. VoiceDraw is built upon the Vocal Joystick engine in order to process "non-linguistic vocal parameters" in addition to traditional speech recognition for providing continuous and fluid control of the virtual brush. Non-linguistic vocal parameters are voice features that do not correspond to a particular word or phrase in a language, such as changes in loudness, pitch, and vowel quality. In developing the VoiceDraw application, we worked with an "electronic voice painter" named Philip Chavez who has had a spinal cord injury for over 30 years and had been creating artwork using his computer and a speech recognition software for over 15 years. A short video documentary featuring the artist and a mention of our VoiceDraw application can be viewed at this link.

Facebook Changes We'd Actually Want To See If you had a dollar for every person who posted their hatred of the new Facebook layout, you’d be able to give Mark Zuckerberg a run for his money. Okay that’s a guess, and most likely a wrong one, but you get our point. When Facebook made its most recent set of changes the Preteen Panic Meter hit “Justin Bieber Has A Girlfriend” levels, and while that demographic made the most noise (mostly high-pitched screams), we weren’t too crazy about the adjustments either.

33 Movies To Watch When You're Sad, Glum Or Bummed&160;Out! www.galadarling.com We all have days that don’t feel quite right. Maybe you’re bored, sick or lethargic. Perhaps you just got some bad news that has left you feeling slack-jawed & useless. Identify a Font. Font and Typeface Identification tools. What font is that? Ever seen a typeface (font) you like but couldn’t identify it? I once knew an Art Director who was able to identify just about any typeface I showed him.

How to Draw Celtic Knotwork The old method These instructions can be followed with pencil and paper or using any computer based drawing or drafting program. I have used Corel Draw, Adobe Illustrator, and AutoDesk AutoCad for various projects, but my favorite is Corel Draw. In the tutorial below I show the method that I use in Corel Draw; however, I have deliberately left out program-specific instructions.

BACK TO THE FUTURE 2 (2011) : Irina Werning - Photographer - StumbleUpon Now its time for KOREA, TAIWAN AND TOKYO. If you live here and want to participate in my project, email me amazing old pictures to : backtothefuturepics@gmail.com Riff Raff 1976 & 2011 London Andy 1967 & 2011 Los Angeles Johanes 1994 & 2011 Hamburg Maarje 1990 & 2011 Amsterdam 50 Things Everyone Should Know How To Do Self-reliance is a vital key to living a healthy, productive life. To be self-reliant one must master a basic set of skills, more or less making them a jack of all trades. Contrary to what you may have learned in school, a jack of all trades is far more equipped to deal with life than a specialized master of only one.

About nanoc nanoc is a flexible static site generator. A static site generator, often abbreviated as SSG, is a tool that transforms content from one format, such as Markdown or AsciiDoc, into another format, usually HTML, and lays out pages so that the site’s look and feel is consistent across all pages. Static sites can be deployed to any web server. nanoc is not: a CMS Drawing Lessons - StumbleUpon In 1988, an extraordinary thing happened in the world of animation. The film "Who Framed Roger Rabbit?"( Directed by Robert Zemekis, animation directed by Richard Williams) was released. The film gleefully celebrated the kind of imaginative slapstick cartoon violence that was the staple of the most popular short cartoon classics that were made during the period from around 1940 till the decline in the year that the film takes place,1947. Cartoon lover's eyes popped like Tex Avery wolves all over the world for this caliber of animation hadn't been seen since...well, 1947.

How to Build a Universe That Doesn't Fall Apart Two Days Later First, before I begin to bore you with the usual sort of things science fiction writers say in speeches, let me bring you official greetings from Disneyland. I consider myself a spokesperson for Disneyland because I live just a few miles from it — and, as if that were not enough, I once had the honour of being interviewed there by Paris TV. For several weeks after the interview, I was really ill and confined to bed. I think it was the whirling teacups that did it. - StumbleUpon Midnight in Paris Woody Allen’s latest places starving writer Owen Wilson in Paris with his fiancée, Rachel McAdams. Searching for inspiration for his incomplete novel, Owen begins taking strolls around the city at night where he discovers an unexpected group of people. I wish I could be more specific, but it would ruin the surprise.