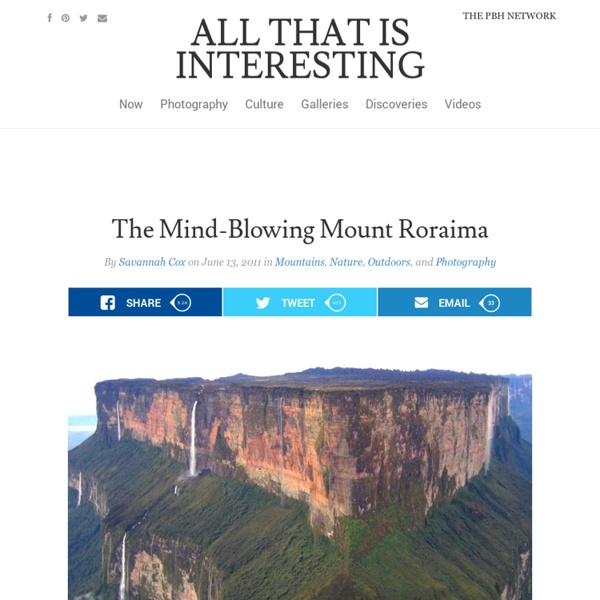 Mount Roraima is the highest of the Pakaraima mountain chain in South America and one of the world’s most extraordinary natural geological formations. The 31 square kilometer summit area of Mount Roraima is defined by 400 meter tall cliffs on all sides and includes the borders of Brazil, Venezuela, and Guyana. The tabletop mountains of the Pakaraima’s are considered some of the oldest geological formations on Earth, dating back to over two billion years ago. The result is the staggering landscape of Mount Rariama which we tour below in photographs and video:

Amazing Places To Experience Around The Globe (Part 1) Preachers Rock, Preikestolen, Norway Blue Caves - Zakynthos Island, Greece Skaftafeli - Iceland Plitvice Lakes – Croatia Crystalline Turquoise Lake, Jiuzhaigou National Park, China Four Seasons Hotel - Bora Bora Innate Beauty of Majestic Wildlife Creatures Photographer Marina Cano has fallen in love with the beauty of nature and its creatures. The wildlife photographer, who is based in Cantabria, located in the North of Spain, has devoted three years of her life to a passion project that exposes the scenic and spiritual appeal of this world's natural environments. In her book Cabárceno, titled after the largest natural wildlife park in Europe, Cano captures stunning images of animals in their natural habitat. The innate beauty of these majestic creatures is revealed through Cano's touching and intimate portraits.

Panorama California, Oregon, Washington 2008 (Crater Lake, Olympic, Mount Rainier, North Cascades, Newberry Crater) Mount Rainier from Skyline Trail Mount Fremont Lookout (Mount Rainier NP) Sahale Arm near Cascade Pass and Doubtful Lake (North Cascades) Sahale Peak and Doubtful Lake (North Cascades) Sourdough Mountain Fire Lookout and Ross Lake (North Cascades) 22 Incredible Photos of Faraway Places Thailand Chances are you already know Steve McCurry as the man who took one of the most iconic photos of our time. It was of a 12-year-old Afghan refugee girl who's piercing green eyes told us her harrowing story. The image itself was named "the most recognized photograph" in the history of the National Geographic magazine and her face became famous as the cover photograph on their June 1985 issue. Beyond just that one photo, McCurry has shot over a million images spanning 35 years. More than anything, he is one of a few that has that amazing ability to capture stories of our shared human experience.

32 Surreal Places On Earth That Belong In A Dream. I’ve Never Wanted To Travel So Badly… During the rainy season, the world’s largest salt flat becomes the world’s largest mirror. The Salar was born when several prehistoric lakes joined into one. The salt flat is so reflective, it’s used to calibrate satellites. Tianzi Mountains, China These unqiuely tall and thin mountains are so alien that they were used in James Cameron’s “Avatar.” Formed underwater 380 million years ago, the ground rose as a result of volcanic activity.

My Photography Tutorials - 360 Degree Reverse Photography - Gallery In order to create a , you do not need to be an expert photographer or own expensive photography equipment. You just need to have a standard SLR camera, tripod and a 360-degree panorama software package and of course a good panorama to shoot. Follow these successfully achieving professional results in . First, pick a spot that is equidistant from every point in your photo. You should not have to zoom in and out. Since this will consists of a series of photos taken from one position as the camera is spun in a circle, a tripod is beneficial as it will give more consistent results. Olympic National Park: One of the wildest places left in the USA [36 PICS] Maple Glade Trail. It’s supposed to be a humbling experience to stand amidst such giants in the ancient forests of Olympic National Park. Photo #1 by rachel_thecat Maples in Olympic National Park’s Hoh Rain Forest. 95% of this national park is designated as wilderness, a paradise for backpackers and hikers.