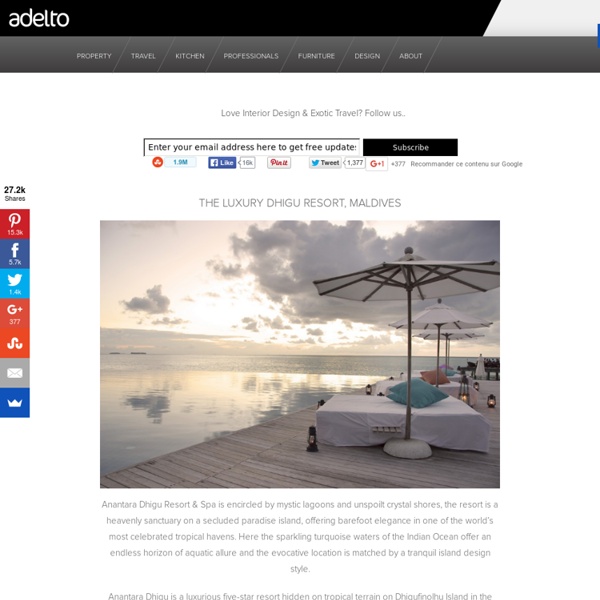 The luxury Dhigu Resort, Maldives Anantara Dhigu Resort & Spa is encircled by mystic lagoons and unspoilt crystal shores, the resort is a heavenly sanctuary on a secluded paradise island, offering barefoot elegance in one of the world’s most celebrated tropical havens. Here the sparkling turquoise waters of the Indian Ocean offer an endless horizon of aquatic allure and the evocative location is matched by a tranquil island design style. Anantara Dhigu is a luxurious five-star resort hidden on tropical terrain on Dhigufinolhu Island in the Maldives’ South Male Atoll, a mere 35 minute speedboat journey from the island nation’s international airport, or a scenic five minutes by private chartered seaplane. Male-based architect Mohamed Shafeeq from Group X Design Associates and Thailand-based interior design company, Abacus, headed by John Lightbody, have styled the resort’s distinctive environment as a creative complement to the natural beauty of the island. Anantara Dhigu, P.O.

The 16 Reasons You Need To Drop Everything And Travel Right Now There’s a characteristic of our generation that can only be described as severe restlessness. I am not specifically referring to the number of friends you have who are prescribed Adderall; although that’s definitely another cultural trend I could discuss in length. What I’m talking about is a restlessness of the soul, the wandering spirit, a culture of nomads. Travel Guides, Luxury Travel and Travel Info Bran Castle situated near Bran and in the immediate vicinity of Bra?ov, is a national monument and landmark in Romania. The fortress is situated on the border between Transylvania and Wallachia, on DN73. Commonly known as “Dracula Castle” (although it is one among several locations linked to the Dracula legend, including Poienari Castle and Hunyad Castle), it is marketed as the home of the titular character in Bram Stoker’s Dracula. There is, however, no evidence that Stoker knew anything about this castle. There is evidence, however, that Vlad Tepes actually did use the castle during his raids into Transylvania.

15 Amazing Castles from Around the Globe Although designed and built for the prominent purpose of defense, today the castles seem like somewhat unrealistic constructions straight from the fairytale world. From solid strongholds to oriental fortresses and highly decorative palaces, the castles are our connection to the past, where legends mix with history and reality blends with a fairyland. This fairytale castle is the historical seat of the Prussian Kings and German Emperors. Its origin dates back to the Middle Ages - it was built in the 11th century, then completely destroyed in 1423 and reconstructed in 1461. The view from the castle that stands on top of Mount Hohenzollern (855 m) is as stunning as the complex itself. The castle is located about 50 kilometers (30 mi) south of Stuttgart, the capital of the Baden-Württemberg state.

Hidden Beach in Marieta Islands, Mexico Located in the Marieta Islands, about 20 nautical miles from Puerto Vallarta, lies an idyllic beach paradise hidden underneath a hole in the ground. Called the “Hidden Beach” or “Playa de Amor” (Beach of Love), this one-of-a-kind natural wonder has remained untouched by human hands for many years. Within its natural cavernous shell, crystal-clear turquoise waters peacefully lap against its powdery white shores, out of sight and out of reach from the rest of the world. Only recently when its photos spread virally across the internet did it become one of the most popular beaches in Mexico. Image source updates.lifehacker By Matthew Kepnes Think you don’t have enough money to travel? Think again. Travel guru Matt Kepnes puts that myth to rest with this guide to traveling on little (or no) money.

22 Unbelievable Places that are Hard to Believe Really Exist Our world is so full of wonders that new and amazing places are discovered every day, be that by professional photographers or amateurs. Different geographical locations, climatic conditions and even seasons offer the widest variety of natural wonders: pink lakes, stunning lavender or tulip fields, breath-taking canyons and mountains, and other places you can hardly believe actually exist! [Read more...] Some of the pictures in this collection will be of all natural sights you can find while traveling around the world, while the others have experienced human interference – but even in these cases, the result of such collaboration is spectacular.

10+ Most Beautiful Island Photography on Earth Today, we want to have a little break and have a deep breath while looking at these magnificent and beautiful island photography from around the world. Island in Lhaviyani Atoll Source Bora-Bora Island Source Luxury Resort Ayada, Maldives Luxury Resort Ayada, Maldives Ayada Maldives is a brand new awe-inspiring destination comprising an opulent 112 villa resort located on the 150,000 square meter paradise island of Maguhdhuvaa in the stunning Gaafu Dhaalu Atoll. From the moment you arrive on the luxury resort’s delicate, powder white sands you will be immersed in a fantasy of luxury, quality and style unique only to Ayada Maldives. Delight in the impeccable service and superb amenities of the seven indulgent restaurants, bars and cafes offering world-class cuisine to tantalise taste buds, the extensive 3,500 square meter AySpa Spa & Health Club by ESPA will take you to a blissful level of relaxation. Ayada further includes a kids’ club, scuba diving centre and an array of water sports.

Top Tourist Attractions 2015 With a whole host of new attractions opening this year, from world-record-beating skyscrapers to whacky amusement parks, there’s plenty to get your teeth into. To help you decide where to visit, we’ve picked the top 9 new tourist attractions around the world. Shanghai Tower, China A better symbol of China’s continuing march forward would be harder to find than the new Shanghai Tower, at 632 metres the world’s second tallest building and muscling its way in to every shot of Shanghai like a giant robotic arm. Twisted from base to tip, at about one degree per floor, it is even designed to withstand typhoons. By the end of this year the tower will also have the world’s highest observation deck, at 557 metres above sea level.

www.acf-fr You've probably slept in a hotel room in more than one occasion. You've probably slept in at least one pretty weird, cheap, campy or luxury hotel room as well. But we doubt that you have ever slept in one of these amazingly weird hotel rooms. 1. Places to see at least once in life They say there are places in this world that anyone should see them at least once in life. Although we want each of you to go see them live, and we offer in the form of photos below. If I had to redo the path for real, the steps you would wear in Norway in Greece, Iceland, Netherlands, Croatia, China and Bora Bora. Whether it will attract the ocean or dream of green forests and endless, fascinating places of the world is waiting to delight.

The Sifter's Top 10 Homes of 2010 If you’re a regular reader of the Sifter you’re familiar with my real estate fascination. I love posting all types of homes. From the unique and interesting to the grand and opulent. Below you will find a collection of the Sifter’s Top 10 Homes from 2010. Click any picture or link to be taken to the original post, enjoy! The Biggest and Most Expensive Home Posted in 2010 Amazing Places To Experience Around The Globe (Part 1) Preachers Rock, Preikestolen, Norway Blue Caves - Zakynthos Island, Greece Skaftafeli - Iceland Plitvice Lakes – Croatia Crystalline Turquoise Lake, Jiuzhaigou National Park, China

A night at the Gogglebox mansion in Sandwich Tim Chester spends an evening with the “posh couple” from Britain’s latest TV craze Gogglebox. Gogglebox shouldn’t work. The TV show about people watching TV shows sounds like the most meta, barrel-scraping idea in the history of 10 Stone Testicle ideas, but somehow it’s compulsive viewing, a window into the country’s living rooms, prejudices and teatime habits that’s pulling in three million viewers per week, a format that has since been sold to the States and numerous other countries. If you’re one of its legion of converts, you’ve probably longed for a night on the settee with some of the protagonists, an off-camera chit chat with Sandra & Sandy or June & Leon or Christopher & Stephen. As it happens, you can do exactly that.