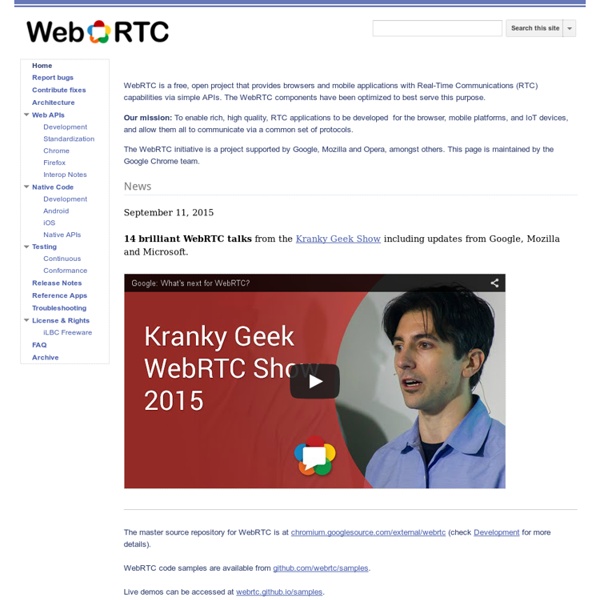 DNS 101 DNS (Domain Name System) You likely have many applications running on your laptop right now, and chances are some of them require an external resource or piece of data that will be retrieved from across a network. In order for your applications to access these resources they need to know their location. The location is typically identified by an ip address and are written in either decimal or hexadecimal. When dealing with ips, they can be very hard to memorise; especially as there are two different forms of ip: HTML5 Cross Browser Polyfills · Modernizr/Modernizr Wiki The No-Nonsense Guide to HTML5 Fallbacks So here we're collecting all the shims, fallbacks, and polyfills in order to implant HTML5 functionality in browsers that don't natively support them. The general idea is that: We, as developers, should be able to develop with the HTML5 APIs, and scripts can create the methods and objects that should exist. Developing in this future-proof way means as users upgrade, your code doesn't have to change but users will move to the better, native experience cleanly.

Getting Started with WebRTC WebRTC is a new front in the long war for an open and unencumbered web. Brendan Eich, inventor of JavaScript Real-time communication without plugins Imagine a world where your phone, TV and computer could all communicate on a common platform. Imagine it was easy to add video chat and peer-to-peer data sharing to your web application. That's the vision of WebRTC. Terminal Debugging Utilities IntroductionPrerequisites Utilities top: check running processes for cpu and memory utilisationps: see what processes are runningstrace: monitor interactions between processeslsof: list of open filesnetstat: monitoring network trafficifconfig: configure or review your network interfacesiftop: monitors network traffic and displays table of bandwidth usageiptraf: monitoring network traffic (more visual than netstat, not as detailed)tcpdump: network packet snifferwireshark: network packet sniffer and analyser (gui)tshark: network packet sniffer and analysertelnet: utility for communicating with another hostHonorable mentionsConclusion Introduction Not all programmers need to get their hands dirty and have to dig deep into what exactly their applications or services are doing at a lower/network level. This is why programmers work with programming languages, as they provide a nice high-level abstraction layer that protects us from a lot of these concerns. Agony of Choice Deprecated Commands?

Snap.svg - Why Snap Snap.svg is a brand new JavaScript library for working with SVG. Snap provides web developers with a clean, streamlined, intuitive, and powerful API for animating and manipulating both existing SVG content, and SVG content generated with Snap. Currently, the most popular library for working with SVG is Raphaël. One of the primary reasons Raphaël became the de facto standard is that it supports browsers all the way back to IE 6. However, supporting so many browsers means only being able to implement a common subset of SVG features. Snap was written entirely from scratch by the author of Raphaël (Dmitry Baranovskiy), and is designed specifically for modern browsers (IE9 and up, Safari, Chrome, Firefox, and Opera).

Web Real-Time Communications Working Group Meetings The group meets on an ad-hoc basis week on the phone. Please check the mailing-list for logistics information. Setting Up A Render Farm What and Why? A render farm is simply a collection of networked computers that work together to render a sequence in less time. By dividing your sequence between multiple machines your total render time becomes a fraction of what it is on a single computer. Most production studios will fill huge rooms with server rack upon server rack, full of thousands of rendering computers (or render nodes as you’ll hear them called). But they’re also useful (as well as financially viable) for smaller teams or even individuals. The History of the URL On the 11th of January 1982 twenty-two computer scientists met to discuss an issue with ‘computer mail’ (now known as email). Attendees included the guy who would create Sun Microsystems, the guy who made Zork, the NTP guy, and the guy who convinced the government to pay for Unix. The problem was simple: there were 455 hosts on the ARPANET and the situation was getting out of control.