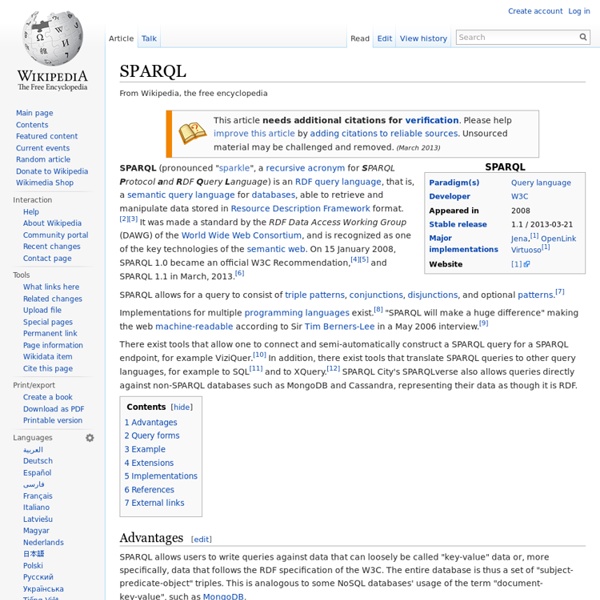 SPARQL (pronounced "sparkle", a recursive acronym for SPARQL Protocol and RDF Query Language) is an RDF query language, that is, a semantic query language for databases, able to retrieve and manipulate data stored in Resource Description Framework format.[2][3] It was made a standard by the RDF Data Access Working Group (DAWG) of the World Wide Web Consortium, and is recognized as one of the key technologies of the semantic web. On 15 January 2008, SPARQL 1.0 became an official W3C Recommendation,[4][5] and SPARQL 1.1 in March, 2013.[6] SPARQL allows for a query to consist of triple patterns, conjunctions, disjunctions, and optional patterns.[7] Implementations for multiple programming languages exist.[8] "SPARQL will make a huge difference" making the web machine-readable according to Sir Tim Berners-Lee in a May 2006 interview.[9] Advantages[edit] The example below demonstrates a simple query that leverages the ontology definition "foaf", often called the "friend-of-a-friend" ontology. Related:  Mongodb-graphDB Methods and Tools • Explore Later

Jena (framework) Jena supports serialisation of RDF graphs to: Web Ontology Language The OWL family contains many species, serializations, syntaxes and specifications with similar names. OWL and OWL2 are used to refer to the 2004 and 2009 specifications, respectively. Full species names will be used, including specification version (for example, OWL2 EL). When referring more generally, OWL Family will be used. History[edit] Early ontology languages[edit] Ontology languages for the web[edit] In 2000 in the United States, DARPA started development of DAML led by James Hendler.[12] In March 2001, the Joint EU/US Committee on Agent Markup Languages decided that DAML should be merged with OIL.[12] The EU/US ad hoc Joint Working Group on Agent Markup Languages was convened to develop DAML+OIL as a web ontology language. OWL started as a research-based[14] revision of DAML+OIL aimed at the semantic web. Semantic web standards[edit] The Semantic Web provides a common framework that allows data to be shared and reused across application, enterprise, and community boundaries.

12 Devs of Xmas I’d like to start off by asking what seems like quite a simple question: What is the difference between data and information? And taking it a step further, where does knowledge fit into this definition? Not as easy to answer as you might expect, is it! Before we start getting our hands dirty creating some awesome data visualisations, it’s going to be useful to learn the definitions of – and difference between – these three words. Data is a set of unprocessed facts (the word comes from the latin datum which means “that which is given”). Information is what you get after you’ve processed the data. Knowledge is perhaps the most difficult to define, but the definition which I think makes most sense in this instance is how we use our past experiences to decide what to do based on information. So what are we going to build, and what with? There are a number of tools out there to help you to create charts and visualisations. A brief introduction to d3 There are four main parts to a d3 project:

mikeaddison93/blueprints REX | Jerry’s Brain app: background and support page Thank you for buying and installing the Jerry’s Brain app (if you haven’t yet but would like to, click here). This page should explain what you’ve gotten into and where to turn with questions or comments. I did not create TheBrain app, nor am I in charge of the servers or the App Store side. First, some important things you should know: Jerry’s Brain is an experiment, one person’s visual journal, not a professionally published database. You can learn a bunch more by watching this short intro to my Brain. My Brain is always accessible freely through your desktop browser at JerrysBrain.com, but that version doesn’t work well on other devices. What is this software? Jerry’s Brain is built on PersonalBrain, PC/Mac/Linux software created by TheBrain, a company based in Los Angeles. Who are you? In December 1997, when I first saw PersonalBrain, I was a technology industry analyst, and it was my job to interview startups like this one. Why are you doing this?

D3.js - Data-Driven Documents Tool For Thought « Battle Of The Sexes, cont. | Main | DevonThink Continued » January 29, 2005 Tool For Thought This week's edition of the Times Book Review features an essay that I wrote about the research system I've used for the past few years: a tool for exploring the couple thousand notes and quotations that I've assembled over the past decade -- along with the text of finished essays and books. I suspect there will be a number of you curious about the technical details, so I've put together a little overview here, along with some specific observations. The software I use now is called DevonThink, and I'm sorry to report that it is only available for Mac OS X. I talked in the Times essay about using the tool as a springboard for new ideas and inspiration. These are all books that I have transcribed digital passages from over the past 10 years or so -- you can see how many quotes for each book in the little number in parentheses after each title. This is where it gets interesting. Comments Thanks. Doug

Sparksee high-performance graph database Evaluation license Evaluate Sparksee for free downloading the evaluation version right now. The evaluation license provided has the following configuration: XSMALL size (up to 1M objects) / 1 session / DEXHA disabled If you need a bigger configuration consider the rest of license options. Free License! Required information will be only used to manage the download of the software and to provide promotional news in the future, but it will never be public or distributed to third parties. Sparsity Technologies encourages research with Sparksee by offering free licenses to PhD students, academics and other university staff, for non-commercial purposes. Sparsity Technologies encourages the use of Sparksee by offering free licenses to selected companies during their development stages. Functionalities & Benefits We offer special functionalites and benefits for bigger corporations that require high level tailored support during their development and deployment of applications using Sparksee.

Leerburg Dog Training | Puppy Training Articles I wrote this article to help new puppy owners wade through the sea of information on our web site and frankly, on the internet. I have listed the specific products I feel new puppy owners should have. These are products we use in our home when we raise a puppy (which we are doing right now for our pup, Favor who is 6 months old). When people bring a new puppy home they are often confronted by problems that were never expected. Biting and chewing problems are just a few surprises they face. This article will attempt to explain why puppies bite and what can be done about it. We get many emails on a weekly basis that deal with problems new puppy owners have as a result of poor socialization. I get many emails asking if they should neuter their dogs. A year or two ago I wrote an article titled "The Ground Work to Becoming a Pack Leader." One of the most common themes in the many emails I get every day concern problems people have with house training their dogs.