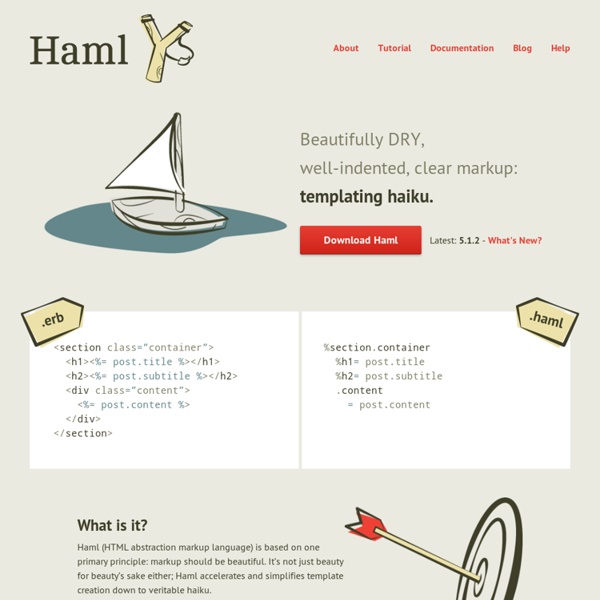 Haml (HTML abstraction markup language) is based on one primary principle: markup should be beautiful. It’s not just beauty for beauty’s sake either; Haml accelerates and simplifies template creation down to veritable haiku. Unspace Interactive and several other professional Rails shops use Haml exclusively for their projects, valuing its focus on cleanliness, readability, and production speed. Give yourself 5 minutes to read the tutorial and then convert one of your ERB templates to Haml. Simplify. Enjoy.

Winslew You might know this – you just found a nice webpage you want to read but have no time right at this moment? Maybe you create a bookmark for it – then you forget about it and remember it while on a long flight or being not connected to the internet. Wouldn’t it be cool to have such webpages marked for reading it later and having cached version of all this webpages on your notebook? Pocket (formerly known as Read It Later) is a service which provides a centralized storage for your webpages you want to read later. There are bookmarklets available for all browser, there are multiple clients available on iPhone and on Mac OS X and you can see all you items on a webpage online.

Haml Haml (HTML Abstraction Markup Language) is a lightweight markup language that is used to describe the XHTML of any web document without the use of traditional inline coding. It’s designed to address many of the flaws in traditional templating engines, as well as making markup as elegant as it can be. Haml functions as a replacement for inline page templating systems such as PHP, RHTML, and ASP. However, Haml avoids the need for explicitly coding XHTML into the template, because it is itself a description of the XHTML, with some code to generate dynamic content.

Using HAML templates in JavaScript Static Version One of my favorite libraries when I was doing ruby development was the HTML templating language HAML. For those of you who haven't yet been enlightened, it's an alternate syntax for XML that results in a lot less code to write the same thing. When I switched to primarily JavaScript, I missed HAML so much I wrote two ports of it. Editors Various text editors have different levels of support for Haml. Here’s a list of all known packages — if you create or learn of a more updated version, please email haml@googlegroups.com. Haml’s syntax is updated from time to time, meaning some of these modes might not be as current as possible. If anyone wants to take on the task of updating an old mode, that would be greatly appreciated.

Identify a Font. Font and Typeface Identification tools. What font is that? Ever seen a typeface (font) you like but couldn’t identify it? I once knew an Art Director who was able to identify just about any typeface I showed him. However, in recent years, even he responds with, I don’t have a clue. So where to turn? HtmlUnit The most common use of HtmlUnit is test automation of web pages, but sometimes it can be used for web scraping, or downloading website content. Version 2.0 includes many new enhancements such as a W3C DOM implementation, Java 5 features, better XPath support, and improved handling for incorrect HTML, in addition to various JavaScript enhancements, while version 2.1 mainly focuses on tuning some performance issues reported by users. See also[edit]

API Design Webinar – Video and Slides This is the recording of a webinar I presented to the OpenText R&D staff. It summarizes the material of the nine articles (totaling approximately 35 printed pages) published so far: If you had no time to read the articles, perhaps you can spare 60 minutes to watch the video. If not, you can browse the slides to get an overall idea of the topics covered so far. Tutorial Before we start this tutorial, I want to make one thing clear. After you look at this, go and convert one of your ERB files to Haml. Just try it. Just take the file and start hitting delete. You don’t have to keep the file if you don’t like it, but after you’re done with this tutorial, just try one file. Haml feels odd for the first 20 minutes, but then after that you will be faster.

About nanoc nanoc is a flexible static site generator. A static site generator, often abbreviated as SSG, is a tool that transforms content from one format, such as Markdown or AsciiDoc, into another format, usually HTML, and lays out pages so that the site’s look and feel is consistent across all pages. Static sites can be deployed to any web server. eRuby eRuby (Embedded Ruby) is a templating system that embeds Ruby into a text document. It is often used to embed Ruby code in an HTML document, similar to ASP, JSP and PHP. Usage[edit] eRuby allows Ruby code to be embedded within a pair of <% and %> delimiters. These embedded code blocks are then evaluated in-place (they are replaced by the result of their evaluation). Here are a few examples of eRuby usage:

Mastering Regular Expressions Each engine might do its work differently, but the end result is that the wheels turn. You still have to steer properly if you want to get anywhere, but that's an entirely different issue. Come to think of it, I bet that an electric engine can qualify for the standard without much change, so it's not really impacted very much -- the standard just "blesses'' the clean results that are already par for the course. The gas engine, on the other hand, needs some major tweaking and a bit of re-tooling before it can qualify.