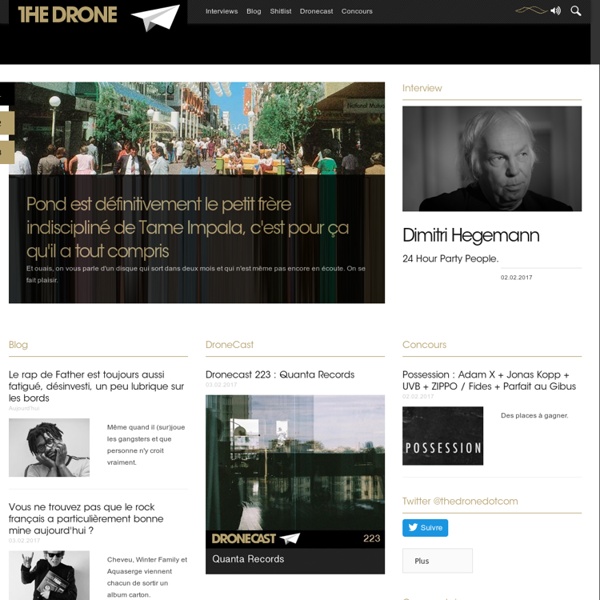 Articles: You Were There: The Complete LCD Soundsystem "Throw" A-side of the Planet E single "Throw"; 2010Written by Eich, Me, Son, Sche (Carl Craig) Produced by James Muprhy One of the tensions driving LCD's music through their history was between the machine pulse of electronics and the imperfection of live playing. Murphy believed that people together making music in a space had a special quality all their own that couldn't be replicated with computers, but, as a committed fan of dance music, he also understood the hypnotic power of the sequencer.

Chicago House Bass in Ableton Live: Subtractive Synthesis, Analogue, Envelopes & Filters Today we are bringing you an exclusive taster from our new Sound Design in Ableton Live Course which launched in Jan 2012. In this tutorial Danny J Lewis demonstrates how to create a classic Chicago house style bass using subtractive synthesis and Ableton’s Analogue. Subtractive synthesis is the ‘classic’ method of making sounds and is known for its warm and round character. Album Reviews KTL are Sunn0))) guitarist Stephen O'Malley and electronic noisenik/Mego label boss Peter "Pita" Rehberg, and the duo's moniker is an abbreviation of Kindertotenlieder, a theatrical collaboration between French performance artist Gisele Vienne and American novelist Dennis Cooper. O'Malley and Rehberg were asked to score the piece, whose title (which translates as "Songs on the Death of Children") has a long artistic history. It first emerged as a 425-poem opus written by German poet Freidrich Rückert in 1834 after two of his children died within a few weeks. Later, at the turn of the century, five of those poems were set to an orchestral song cycle by Gustav Mahler. Regardless of preference, any listener will be tested by KTL's opening cut, a 25-minute marathon of barren ambience aptly titled "Estranged".

Jim O’Rourke: Filmography (& Discography) Insignificance All Downhill From Here Don’t believe a word I say Not that you would anyway I may be insincere But it’s all downhill from here If I seem a bit remote You’ll feel better if you say I’m a misanthrope Or whatever floats your boat As for me, I’d rather sink my own Even though I’m here, you should feel all alone Maybe the point of this you’ve just outgrown There are names for me that are better known Just draw a line and I’ll add my own

for iPad Made from black Moroccan cloth and constructed using traditional bookbinding techniques, the cover of the DODOcase Classic for the iPad is designed to fold back to be used as a stand. An elastic strap keeps your iPad protected while on the go. Offering a new solid core bamboo, complete with a four-piece tray design, the DODOcase Classic perfectly matches the curvature of your iPad while providing access to all buttons and ports. Cédric Stevens Discography at Discogs <div class="alert_message warning"><div class="set_to_page_width"><i class="icon icon-exclamation-triangle icon-large"></i><strong>Please enable Javascript to take full advantage of our site features.</strong></div></div> Cédric Stevens Edit Artist More Images

I analyzed the chords to 1300 songs for patterns. This is what I found. (Part 3) Interactive Discovery Last year, we discussed the first results of a long term effort to study the patterns found in the chords of popular songs. The reception that we got was incredibly positive, and we received a ton of great feedback. The two most common questions we’ve gotten from people have been: “I really like the sound of chords X Y Z together. What other songs use this same progression? Links ¬ landscape-perception.com Berrin, Kathleen (ed.), 1978. Art of the Huichol Indians. New York: Fine Arts Museum of San Francisco/Harry N. (SLR06) Anderegg - 90,000 concrete musique <div style="padding:5px; font-size:80%; width:300px; background-color:white; margin-left:auto; margin-right:auto; border:1px dashed gray;"> Internet Archive's<!--'--> in-browser audio player requires JavaScript to be enabled. It appears your browser does not have it turned on. Please see your browser settings for this feature.