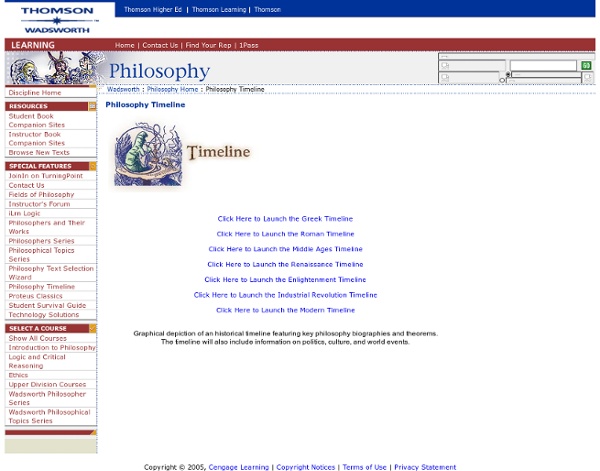 Guide to Philosophy on the Internet (Suber) Welcome to my collection of online philosophy resources. If you are stuck in a frame, click here to escape. If you are a frequent visitor, press reload or refresh on occasion to be sure that you are viewing the most recent version of the page, not the version cached on your hard drive from your last visit. I've marked recommended sites with a red star . When the whole file loads, use the search command on your browser to find items by keyword. To register to receive an email announcement whenever this page is revised, see the bottom of this file. If speed is a problem, try one of the mirror sites in Germany (München, single-file version) or Italy (Bari, single-file version), or Italy (Bari, multi-file version). About this guide. I welcome URLs for inclusion, notice of broken links, and suggestions and comments of all kinds. If you're interested in guides like this to disciplines other than philosophy, see my list of lists of them.

Marx/Engels on Historical Materialism Broad Overview: The German Ideology "The first premise of all human history is, of course, the existence of living human individuals. Study Guide Socialism: Utopian and Scientific "The materialist conception of history starts from the proposition that the production of the means to support human life and, next to production, the exchange of things produced, is the basis of all social structure; that in every society that has appeared in history, the manner in which wealth is distributed and society divided into classes or orders is dependent upon what is produced, how it is produced, and how the products are exchanged. Study Guide >> Additional Readings in Overview Particulars in theory and practice: 18th Brumaire of Louis Bonaparte (abstracts) Chapter One: "Men make their own history, but they do not make it as they please; they do not make it under self-selected circumstances, but under circumstances existing already, given and transmitted from the past. Study Guide Anti-Dühring (abstracts)

Hume and Kant The 1700s saw many great thinkers who have left a lasting impact on modern philosophy and science -- and psychology. But there were two who would, between them, define the nature of science, especially psychology. They are, of course, David Hume and Immanuel Kant. David Hume was born April 26, 1711 in Edinburgh, Scotland. His family suggested he try law, and he tried, but found that it -- as he put it -- made him sick. Hume was the ultimate skeptic, convincingly reducing matter, mind, religion, and science to a matter of sense impressions and memories. I will let him speak for himself. All ideas are copies of impressions...it is impossible for us to think of anything which we have not antecedently felt by our senses.... And so...no matter! There are some philosophers (e.g. And no mind! There is no idea in metaphysics more obscure or uncertain than necessary connection between cause and effect. Out with cause and effect! So long, science! In 1752, he wrote Political Discourses. 1.

Kant: Knowledge Kant: Experience and Reality Analogies of Experience So Kant maintained that we are justified in applying the concepts of the understanding to the world as we know it by making a priori determinations of the nature of any possible experience. In order to see how this works in greater detail, let's concentrate on the concepts of relation, which govern how we understand the world in time. 1. 2. 3. Notice again that these features of nature are not generalized from anything we have already experienced; they are regulative principles that we impose in advance on everything we can experience. Phenomena and Noumena Having seen Kant's transcendental deduction of the categories as pure concepts of the understanding applicable a priori to every possible experience, we might naturally wish to ask the further question whether these regulative principles are really true. According to Kant, it is vital always to distinguish between the distinct realms of phenomena and noumena. The Aim of Metaphysics

Leibniz’s Metaphysics  The German rationalist philosopher, Gottfried Wilhelm Leibniz (1646-1716), is one of the great renaissance men of Western thought. He has made significant contributions in several fields spanning the intellectual landscape, including mathematics, physics, logic, ethics, and theology. Unlike many of his contemporaries of the modern period, Leibniz does not have a canonical work that stands as his single, comprehensive piece of philosophy. Together with several apparently self-evident principles (such as the principle of sufficient reason, the law of contradiction, and the identity of indiscernibles), Leibniz uses his predicate-in-subject theory of truth to develop a remarkable philosophical system that provides an intricate and thorough account of reality. This article is predominately concerned with this broad view of Leibniz’s philosophical system and does not deal with Leibniz’s work on, for example, aesthetics, political philosophy, or (except incidentally) physics. 1. 2. 3. 4. 5.

Quantum Consciousness . Stuart Hameroff Overview: Could Life And Consciousness Be Related To The Fundamental Quantum Nature Of The Universe? Consciousness defines our existence and reality. But how does the brain generate thoughts and feelings? We also don't know if our conscious perceptions accurately portray the external world, or if we all have similar pictures of what lies outside our conscious minds. Reality seems to be described by two sets of laws. Despite our lack of understanding, these strange quantum properties are utilized in quantum computation and other forms of quantum information technology (e.g. quantum cryptography, quantum teleportation) which are likely to revolutionize science. Quantum computers differ from conventional computers which represent information as e.g. binary bits of either 1 or 0. But why are there two separate realities, and how are they related? There are several modern interpretations of quantum state reduction, or "collapse of the wave function". The Orch OR model.

Belief in Belief Followup to: Making Beliefs Pay Rent (in Anticipated Experiences) Carl Sagan once told a parable of a man who comes to us and claims: "There is a dragon in my garage." Fascinating! We reply that we wish to see this dragon—let us set out at once for the garage! "But wait," the claimant says to us, "it is an invisible dragon." Now as Sagan points out, this doesn't make the hypothesis unfalsifiable. But now suppose that we say to the claimant, "Okay, we'll visit the garage and see if we can hear heavy breathing," and the claimant quickly says no, it's an inaudible dragon. Carl Sagan used this parable to illustrate the classic moral that poor hypotheses need to do fast footwork to avoid falsification. Some philosophers have been much confused by such scenarios, asking, "Does the claimant really believe there's a dragon present, or not?" The rationalist virtue of empiricism is supposed to prevent us from this class of mistake. There's different kinds of belief in belief.

Information Philosopher - Introduction Introduction The Information Philosopher has established that quantum mechanics and thermodynamics play a central role in the creation of all things. This finding has enormous implications for philosophy and metaphysics. Instead of a closed universe that is winding down deterministically from an initial state of high information, we find the universe is open and increasing information indeterministically from an initial state of relatively high entropy and low information. Information is being continuously created in the universe, not least by human beings who are just learning that they are part of the cosmic creative process. An open indeterministic universe with increasing information suggests three testable philosophical ideas: a model for free will and creativity that may satisfy determinists and libertarians a value system based on providential processes in the universe an epistemological explanation of knowledge formation and communication. Man is Free. For Teachers For Scholars

Hegel's Philosophy of History Back to main page The philosophy of history espoused by George Frederick Hegel, philosopher and historian, has often been viewed as largely teleological. It has often been speculated that this philosophical presumption arose from the historical context of Hegel's life, whether negatively through his fear of the French Terror or positively from his dedication to the Romantic thesis that Reason shapes the universe. Nonetheless, Hegel's commitment to the dialectical progression of time and to the triumphant end of history is taken to be a largely deterministic and ahistorical philosophy. Hegel as a determinist It is not difficult to see how this interpretation of Hegel arose. Spirit does not toss itself about in the external play of chance occurrences; on the contrary, it is that which determines history absolutely, and it stands firm against the chance occurrences which it dominates and exploits for its own purpose. The Hegelian dialectic The role of contingency

Analytic philosophy Analytic philosophy (sometimes analytical philosophy) is a style of philosophy that came to dominate English-speaking countries in the 20th century. In the United Kingdom, United States, Canada, Scandinavia, Australia, and New Zealand, the vast majority of university philosophy departments identify themselves as "analytic" departments.[1] The term "analytic philosophy" can refer to: A broad philosophical tradition[2][3] characterized by an emphasis on clarity and argument (often achieved via modern formal logic and analysis of language) and a respect for the natural sciences.[4][5][6]The more specific set of developments of early 20th-century philosophy that were the historical antecedents of the broad sense: e.g., the work of Bertrand Russell, Ludwig Wittgenstein, G. In this latter, narrower sense, analytic philosophy is identified with specific philosophical commitments (many of which are rejected by contemporary analytic philosophers), such as: History[edit] Logical positivism[edit]