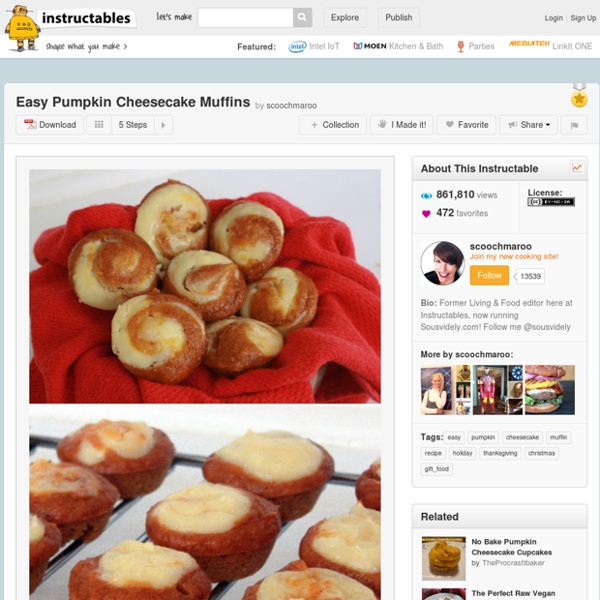 Watermelonade Recipe at Epicurious photo by Roland Bello yield Makes 1 gallon (serves 16) active time 30 min total time 30 min You would be hard-pressed to find something more refreshing than watermelon. This cooler is easy to make, beautiful to behold, and not too sweet. LaSaGnA TiMpAnO I went to see tUnE-yArDs on Monday night with some friends, and as always we wanted to cook a meal that somehow related to the show we were heading to. Sometimes this is hard to do, but other times it seems to come naturally. Finding culinary inspiration in Merrill's lyrics seemed like it would be tough, but my sister knew what she wanted to make without hesitation. "How about something layered, because of all the vocal and instrument layering in the music?"

Broccoli and White Cheddar Mac & Cheese « The Craving Chronicles Mac & cheese. Oh how I love mac & cheese. It’s one of my favorite foods on the planet (besides chocolate). Whenever it’s cold outside or I need some comfort or I’m hungry or it’s a day that ends in ‘y’, I turn to mac & cheese. I’ve had to impose mac & cheese limits on myself to keep from eating it every day of the week. I love it so much I would run away with mac & cheese and never look back. Coca-Cola Cupcakes I don’t drink coca-cola. But I do eat it. Weird. Yeah, I dunno. It’s way better eaten. Let’s take a look, shall we? Cake Batter Pancakes I’m fairly convinced that the world would be a better place if more sprinkles were involved. I know. I just made pancakes. It seems I have an unnatural obsession with cake batter. Well I do.

Brazilian Lemonade This is my most favorite drink. Ever. Maybe I’d feel differently if I drank (as in alcohol), but there is nothing I love more than a warm, breezy afternoon and a pitcher of Brazilian lemonade. I didn’t try it for a long, long time because I was very put off by putting sweetened condensed milk in with citrus fruit. Parmesan Roasted Potatoes Ok fine. I’m officially ready to make the transition to fall. And I thought, what better way to do it than with my all time favorite Parmesan Roasted Potatoes! Over 100 Quick and Easy Recipes We Have Preparation and Cooking Times of 30 Minutes or Less The majority of recipes we offer can be both prepared and cooked in 30 minutes or less, from start to finish. A number of them can also be prepared ahead of time and enjoyed later.

SELF-FROSTING NUTELLA CUPCAKES : Feistycook When I bought the jar of Nutella last weekend I made a vow (yes I did) that part of the Nutella will be made into cupcakes. I’ve always planned to do that whenever I buy one but it never gets that far. Darn those nutella sandwiches and occasional spoon licking. Well, I finally made self-frosting nutella cupcakes and golly they were so beautiful and delicious. This self-frosting nutella cupcakes recipe was adapted from Connie of Pinoycook which she got from Baking Bites. Ridiculously Easy I mean it. Easy. E…..Z….