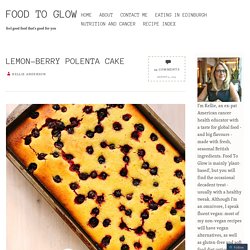 I don’t mean this as an insult to polenta cakes, you, or anyone else for that matter. But, really. Dumping everything in a stand mixer and pressing ‘on’ is pretty easy. And sometimes – even although you may be the best baker in your family, in your workplace, in the world – stupidly-easy is what you need. If and when that situation arises, polenta cake is there for you.

We have Italians to thank for this brilliant way with dried and ground corn. Food - Recipes : Vegan prune and ginger tart with almond pastry. Deliciously Ella's raw brownies recipe. No matter how many hundreds of times I make these I still can’t quite believe how they turn out and how easy they are – just four ingredients in a food processor. 5-minute brownies. 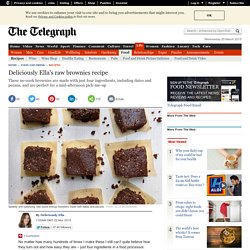 Yet they still taste identical to normal brownies with the same perfectly squishy, melt-in-your-mouth texture. INGREDIENTS 2 cups medjool dates (they’re the squishier, stickier, tastier kind of dates) 1 cup pecans 2-3 tbsp raw cacao powder 2 tbsp maple syrup (optional and can be replaced with any other liquid sweetener) METHOD This is the easiest recipe.

Simply blend the pecans in a food processor until they form a crumbly mixture, then add the dates and blend again before adding the cacao and maple syrup. Place the mixture into a baking tray and either refrigerate for three to four hours or freeze for one hour to allow them to set. Keep them in the fridge for freshness. READ Deliciously Ella: how to swap sugar for naturally sweet ingredients. Fuggle Antics. A sticky situation: two golden syrup recipes. When I think of baking, I think of the famous tin of golden syrup: deep emerald green, resiliently old-fashioned and half-welded to the cupboard shelf by the thick rivulets slumped down its sides. 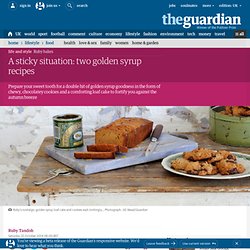 It’s the taste of my childhood baking: dusted off and prised open on rainy days for a round of flapjacks, cookies or cakes, before being returned to the larder for the next time boredom struck. Like lurid custard powder and packets of decade-old blancmange mix, it was one of the few ingredients we always had in the house – in no small part, I suspect, because it was the only thing I’ve ever found too sweet to just illicitly eat by the spoonful. Golden syrup is made by “inverting” a normal sugar syrup. Although a great deal of chemistry is involved in the process, for now it’ll suffice to say that it’s the conversion of sugar as we know it – crystalline sucrose, like you might put in your tea or on your cereal – into glucose and fructose. 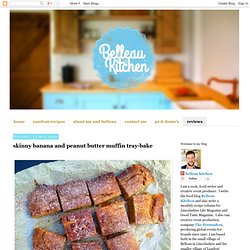 I seem to be forever lamenting about how busy we are at the moment but I do honestly feel i'm neglecting my blog. I've even composed a 'farewell to blogging' post because i'm so worried that I won't have time to blog much over the next few months but I really shouldn't moan... so do bare with me over the next few days and weeks... i'm still here... I still love you... i'm just full... skinny banana and peanut butter muffin tray-bake last weekend was a tray bake-kind of weekend... well, it would have been a muffin kind of weekend but I don't have a muffin tin here at the London flat... so it was a tray-bake weekend and actually for how incredibly easy this is, the tray-bake just added to the salubrious nature of my Saturday.

You see I knew we had one of those weeks coming up, where i'm unlikely to see the flat, let alone the kitchen so I took advantage of this one spare day to be as lazy as possible. Marbled Peanut Butter and Jam Banana Bread. As an ex-pat American living in Scotland, peanut butter and jelly is something I occasionally have a hankering for. 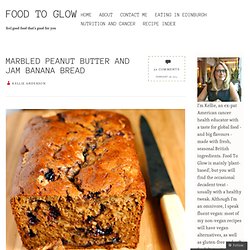 It must be in my DNA. How to cook the perfect cornbread. It is always the simplest foods that arouse the strongest emotions. 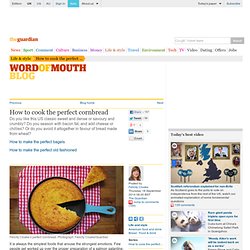 Few people get worked up over the proper preparation of a salmon galantine, or indeed a croquembouche, but just as every Brit has got an opinion on the best way to mash potato, in the US, almost everyone reckons they know what makes good cornbread. After all, it’s got a much longer history in the country than most modern Americans – Native Americans were roasting and grinding corn centuries before anyone else turned up. It took settlers a while to warm to this new grain – according to Betty Fussell’s The Story of Corn, “for wheat eaters, corn was a punishment” – but warm they did. Although it is known today as a southern speciality, there is a northern version too, which tends to be sweeter and cakier. Heads roll over the distinction – as one poster on the food site chowhound observes, “My Texas daddy tells me that if you put sugar in cornbread you’re liable to get shot.”

The corn The flour. Food - Recipes : How to make cinnamon buns. How to make the perfect bagels. Judging bagels in the company of Sarit Packer and Itamar Srulovich of Honey & Co, and Poopa Dweck, a Jewish food writer from New Jersey, in front of an expectant kippah-clad audience, is – as I discovered recently at Gefiltefest, London's annual Jewish food festival – a nerve-wracking experience. 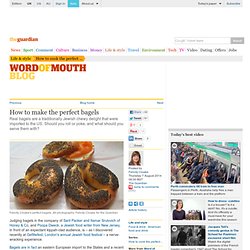 Bagels are in fact an eastern European import to the States and a recent trip to New York reminded me just how good they can be. A real bagel, that is, not the shiny bread rolls with a hole in the middle that pass for bagels in the UK. OK, the ones we were tasting, from London's Jewish bakeries, were decent, but if your postcode doesn't start with NW, frankly you don't have a hope of scoring a fresh one.

Unless you're prepared to roll up your sleeves and bake them yourself, that is. (Note: this recipe is for the smaller, chewier form of bagel that pre-dates the fluffy behemoths more popular today.) The flour and ratios Cook's Illustrated's bagels. Lemon Blueberry Cornbread Skillet. I’ve been craving dessert for a while now, so when I saw this recipe for Raspberry Polenta Cake over at Love and Lemons, I knew that was the one I wanted. 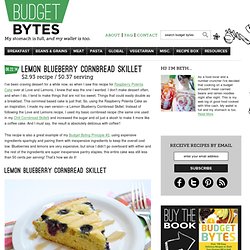 I don’t make dessert often, and when I do, I tend to make things that are not too sweet. Things that could easily double as a breakfast. This cornmeal based cake is just that. Food - Recipes : Homemade jaffa cakes. How to make blueberry and vanilla bagels – recipe. I make a lot of bread with my children – they like the kneading and the pummelling, the smooth elasticity of this beige dough. 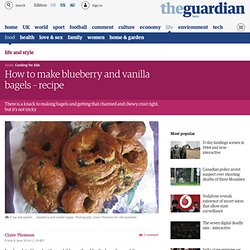 They also like the fact that this thing they've helped to make sits there on the worktop and grows as the hour or so passes. But we've never made bagels until now. I've always just bought bagels assuming there to be some thorny knack to baking them. Smart cookies: Yotam Ottolenghi's biscuit recipes. Flour, eggs, butter and sugar: four kitchen staples with a world of sweet tricks up their sleeves. 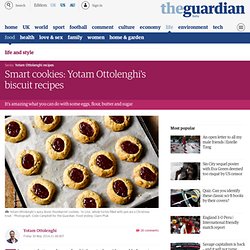 It never ceases to amaze me that the same short list of ingredients can produce such different results. Increase the flour and butter for rich, crumbly shortbread and sablés; lose the butter, flour and egg yolks for meringues; bring them back for a more cake-like texture; use caster sugar for a crisp bite, or molasses for something more chewy. Where biscuits are concerned, certain conditions must be met: chill the butter to be rubbed into flour to make the dough, say, but start with it at room temperature when it's to be creamed with sugar.

But as long as you follow those few rules, there's plenty of room for manoeuvre. Traditional madeleine recipes, for example, call for little more, flavour-wise, than eggs, butter, lemon zest and a hint of vanilla. Spicy Linzer thumbprint cookies These look great if you fill half of them with raspberry jam and the remainder with lemon curd. Bramley apple soda bread, 20p. Bramley apple soda bread (makes four generous portions at 20p each): 200g flour (any will do – plain, self raising, rye, whole meal…), 35p 1 rounded tsp bicarbonate of soda, 3p 2 tsp lemon juice, 2p 200ml milk, 5p*** 1 large Bramley apple (or other variety, but they do work incredibly well here!) , 35p First, measure out the milk and add the lemon juice, and leave to stand while you do the rest. Measure the flour into a mixing bowl, add the bicarbonate of soda, and quickly mix through.

Finely dice or grate your apple – I leave the skin on mine for extra goodness, and it adds a nice crunch to the bread. Pour in the soured lemony milk, and stir well. Bake in the centre of the oven at 180C for 40 minutes. Sticky clementine cake. Sweet Potato-Raisin Muffins. Food - Recipes : Tea loaf. Food - Recipes : Honey cake. Easy honey cake. Food - Recipes : Fig and date scones. Rose Prince's Baking Club: sausage Danish. Food - Recipes : Toffee apple muffins. Chocolate Tea Bread, 18p. Chocolate Tea Bread, 70p for 4 generous portions at 18p each. This came about because I LOVE chocolate chip brioche, and going vegan for Lent (and maybe for life if I manage to make the switch) means that I haven’t had those little sweet buttery rolls full of chocolate chip goodness in a very long time.

For the past few days it’s all I’ve been able to think about – so I decided to try to make some chocolate chip bread as a replacement.