Got Beets In My Cake!!! – Eggless Red Velvet Cupcakes. I had never seen or heard of a Red Velvet Cake till I started blogging, about 2 years ago. 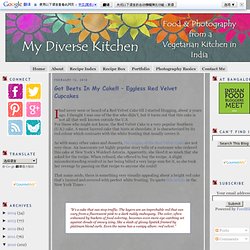 I thought I was one of the few who didn’t, but it turns out that this cake is not all that well known outside the U.S. For those who might not know, the Red Velvet Cake is a very popular Southern (U.S.) cake. A moist layered cake that hints at chocolate, it is characterized by its red colour which contrasts with the white frosting that usually covers it. As with many other cakes and desserts, the origins of the Red Velvet Cake are not very clear. An inaccurate yet highly popular story tells of a customer who ordered this cake at New York’s Waldorf-Astoria.

That name aside, there is something very visually appealing about a bright red cake that’s layered and covered with perfect white frosting. Easy Cinnamon Rolls. I made the cinnimon rolls exactly as it said, They came out so good, I said “I’m going to try and make bread with this recipe. 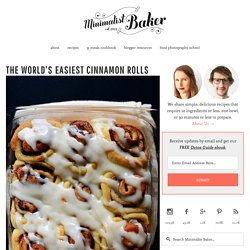 I’ve been trying to bake bread for a while, but it never comes out acceptable. One was extremely dense. I used it to make french toast. That was the only way to make it edible. Anyway, so I made bread with this recipe! Even better than a backery in this area. Even better than Farmer’s Market bread. I used 1 cup Tempt FLAX milk Original flavor, one could use the vanilla flavor though), 3 tbsps Earth Balance, 3 teaspoons Agave Syrup, 1 pkt Active Yeast, 1/2 tsp sea salt (doubled from orig recipe), 2 cups ORGANIC white all purpose flour, 1 cup ORGANIC wheat flour, 1 tbsp organic sugar, 1 tsp vanilla.

With the rolls, the first time, with the all white flour, it took some time, to get all of the 3 cups of flour integrated. The Ultimate Cookie Recipe. Homemade White Dinner Rolls Recipe. What Indians refer to as Pav (as in Pav Bhaji) is probably the dinner rolls to the western world! 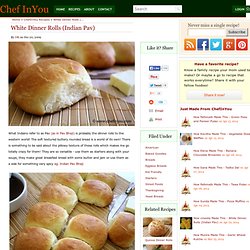 The soft textured buttery rounded bread is a world of its own! There is something to be said about the pillowy texture of these rolls which makes me go totally crazy for them! They are so versatile - use them as starters along with your soups, they make great breakfast bread with some butter and jam or use them as a side for something very spicy eg. Indian Pav Bhaji Its one of those rare baked goods which finds its way in without me tinkering it to add some wholegrains in it. They are v easy to make and don't require lengthy or strenuous effort. References my kitchen notes (original source misplaced) Basic Information Prep Time: 2 to 4 hours Cook Time: Under 30 min Yield: Makes around 12 rolls or pavs Ingredients Tips 1. 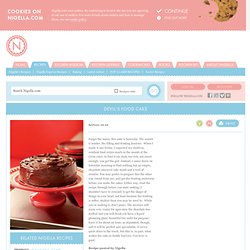 The crumb is tender, the filling and frosting luscious. When I made it one friday, I expected my children, resident food critics much in the mould of the Grim eater, to find it too dark, too rich, not sweet enough: you get the gist. Instead, I came down on Saturday morning to find nothing but an empty, chocolate-smeared cake stand and a trail of crumbs. You may prefer to prepare this the other way round from me, and get the frosting underway before you make the cakes. Bakebakebake: Nigella Lawson's Malteaser cake. I made this cake with my friend last week for her sister's birthday but I never got to try a proper slice :( so I decided to bake it again yesterday because my mum & dad were coming back from their holiday.

It is so delicious, quite dense and rich really. The buttercream is delicious. Quick and Easy Wholemeal Loaf - Bread. The poet Pam Ayres once said, when describing her home-made wholemeal bread, that it was like 'biting into a cornfield', and that's it – the very best description I've ever come across. 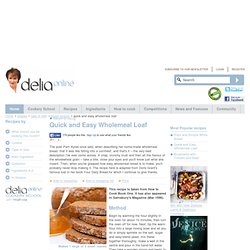 A crisp, crunchy crust and then all the flavour of the wholewheat grain – take a bite, close your eyes and you'll know just what she meant. Then, when you've grasped how easy wholemeal bread is to make, you'll probably never stop making it. The recipe here is adapted from Doris Grant's famous loaf in her book Your Daily Bread,for which I continue to give thanks. Makes 1 large or 2 small loaves This recipe is taken from How to Cook Book One. Begin by warming the flour slightly in the oven for about 10 minutes, then turn the oven off for now. Now transfer the dough to a flat surface and stretch it out into an oblong, then fold one edge into the centre and the other over that. COFFEE AND WALNUT LAYER CAKE.