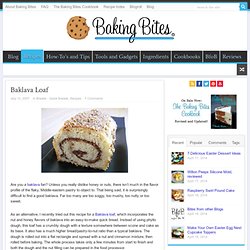 Unless you really dislike honey or nuts, there isn’t much in the flavor profile of the flaky, Middle-eastern pastry to object to. That being said, it is surprisingly difficult to find a good baklava. Far too many are too soggy, too mushy, too nutty or too sweet. As an alternative, I recently tried out this recipe for a Baklava loaf, which incorporates the nut and honey flavors of baklava into an easy-to-make quick bread. Instead of using phyllo dough, this loaf has a crumbly dough with a texture somewhere between scone and cake as its base. The result is delicious.

If you want to add a twist to this, you could add some rum to the honey sauce before drizzling it over the loaf. I’ll say this again at the end of the recipe, but I think that this is a loaf best served warm, so either eat it while it’s nice and fresh or pop it in the microwave (or toaster over) for a bit to heat up each slice before you dig in. Honey syrup 3/4 cup sugar 1/4 cup honey 1/2 cup water. Basic Scones Recipe. Pineapple Upside Down Biscuits + A Cooking Weekend in June! 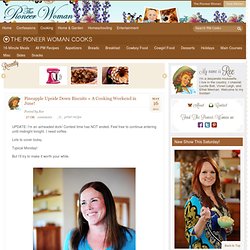 Contest time has NOT ended. Feel free to continue entering until midnight tonight. I need coffee. Lots to cover today. Typical Monday! But I’ll try to make it worth your while. Some time ago, I had a visitor at the ranch. In all seriousness, Pam is a serious inspiration to me in so many ways. In a minute, I’ll show you Pam’s latest cookbook and a recipe of Pam’s that I made last night. But first…the fun part! Today, to celebrate cooking… To celebrate summer… And to celebrate Pam Anderson… I’m giving away a cooking weekend at the Lodge in June. When Pam suggested the Stop Entertaining theme for the weekend of cooking lessons on the ranch, I thought it was perfect. Pam’s approach to entertaining is similar. Three winners will be selected. Each prize package will include: Also, if you’re so inclined, leave a quick description of your approach to entertaining. Do you stress out for weeks before having people over? Do you wig out over the food, pulling out all the stops? Tres Leches Cake.

I first made Tres Leches cake about five years ago, when my baby was still a baby and I was trying to find something yummy to make for my friend Ana for her birthday. 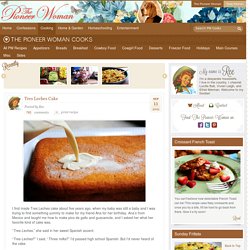 Ana’s from Mexico and taught me how to make pico de gallo and guacamole, and I asked her what her favorite kind of cake was. “Tres Leches,” she said in her sweet Spanish accent. “Tres Leches?” I said. “Three milks?” Ana went on to explain to me what Tres Leches Cake is: a light, airy sponge cake soaked with a mixture of three milks: evaporated milk, sweetened condensed milk, and heavy cream. Cinnamon Buns. So I have a great news. 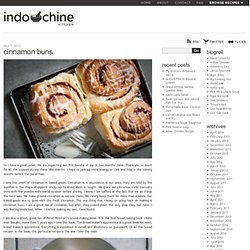 We are expecting our first bundle of joy. In two months’ time. Thank you so much for all the support during these idle months. I hope to pick up more energy to cook and blog in the coming months before the joy arrives. I love the smell of cinnamon in baked goods. Cherry Clafoutis Recipe. Traditional clafoutis recipes call for using cherries with their pits still in, which are supposed to lend some almond flavor to the dish. 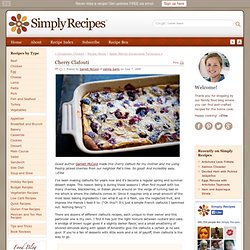 In this recipe the pits are removed, making the clafouti easier to eat, but you can do it either way. Method 1 Preheat the oven to 350F. Butter and lightly flour a 9X9 or 10X7 baking dish. Toss in the cherries and slivered almonds.