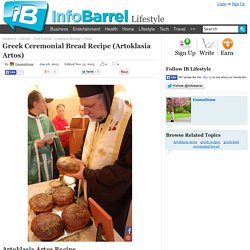 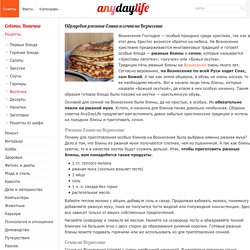 Half Baked Harvest - Made with Love. And that’s the short version…… I spent like the last thirty minutes going back and forth in my head about the title for this post. 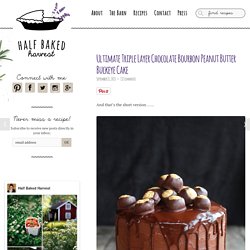 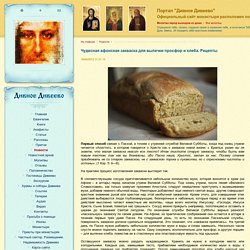 Постные закуски. Bread. 2 Netmums like this Bread is really easy and satisfying to make. 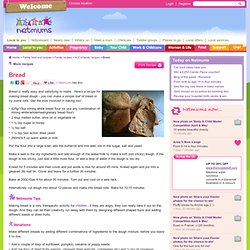 Here's a recipe for making bread dough - you can make a simple loaf of bread or try some rolls. Get the kids involved in baking too! 425g/15oz strong white bread flour (or use any combination of strong white/wholemeal/granary bread flour) 2 tbsp melted butter, olive oil or vegetable oil 1 ½ tsp sugar or honey ½ tsp salt 1 ¼ tsp fast action dried yeast 260ml/9 fl oz warm water or milk Put the flour into a large bowl, add the butter/oil and mix well, stir in the sugar, salt and yeast. Make a well in the dry ingredients and add enough of the water/milk to make a soft (not sticky) dough. Knead for 5 minutes and then cover and put aside to rise for around 45 mins. Bake at 200C/Gas 6 for about 30 minutes. How to Make a Gluten and Dairy Free Marmalade Ginger Cake. Apple Bread.

Hello, I wanted to try making Apple Bread again, after seeing Larry's recent Odds and Ends post (thank you Larry) (and because I was able to find Honeycrisp apples at the market!). 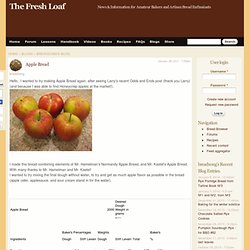 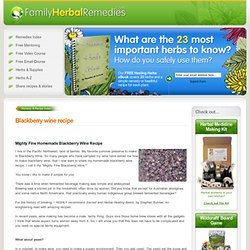 My favorite summer preserve to make is Blackberry Wine. How to Make Vegan Egg Drop Soup: 17 Steps. Edit Article Make the Tofu CurdsPrepare the Soup Edited by Tammy, sumedha, Maluniu, June and 1 other Homemade tofu curds create a substitute for eggs in this version of egg drop soup. 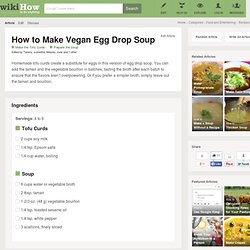 You can add the tamari and the vegetable bouillon in batches, tasting the broth after each batch to ensure that the flavors aren’t overpowering. Southern Sweet Tea With A Secret Ingredient. Now that we’re past Memorial Day, I think it’s safe to say summer has unofficially begun! 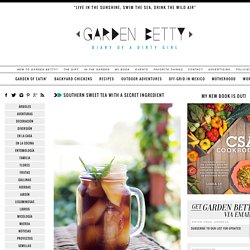 (Right?!) And nothing says summer quite like a sweaty glass of sweet tea sipped on the front porch on a lazy Sunday morning. I first discovered sweet tea — real sweet tea, Southern style — over a decade ago when I was moving cross-country from New York to California. I spent two weeks on the road, taking the southern route and passing through Alabama, Mississippi and Louisiana. I became convinced that I was a Southern gal in a former life, because aside from Asian food, I love love love some good old-fashioned comfort food from the South accompanied by an icy glass of fresh-brewed sweet tea. After my umpteenth glass of sweet tea swigged on that sweltering day back in June 2001, I finally asked the kind lady how to make it. Now I know this might sound weird to most of you, but trust me on it. Makes 2 liters. Как приготовить домашний квас. Советы по приготовлению кваса. Рецепты приготовления кваса. Как готовиться квас. Хлебный квас и березовый квас. 10 советов по приготовлению кваса. Способы приготовления кваса.

Sourdough Bagels Revisited. Many thanks to Susanfnp for posting a great sourdough bagel recipe based on Nancy Silverton's bagel recipe. She also provided a number of key tips as I made these. I posted photos of the first time I did these, and now I have some photos of my second attempt, as well as a spreadsheet with more details such as bakers percentages and preferment percentages.

Sourdough Bagel Recipe (revisited version) Ingredients: 335 grams (12 oz) 90% hydration white flour starter20 grams (0.6 oz) sugar12 grams (0.4 oz) malt syrup14 grams (0.6 oz) salt (I made salt bagels, so the salt in the dough is reduced to avoid too much salty flavor. Mix Dough - Day Before Baking I had to mix and knead these by hand, since I have no mixer in this house.

Shaping Divide the dough into about 18 3 ounce pieces. How to Make Vegan Chocolate Walnut Muffins: 10 steps. Honest Pumpernickels !!!! What is going on in this country (USA) in respect to the denomination of Pumpernickel bread makes me want to yell and scream!!!! It can be understood when a home baker plays around and comes up with something s/he likes. But when so-called Master Chefs like Lauren Groveman on PBS video clips happily mix coffee, plums, wheat flour, yeast and some rye flour together, and calls this "making pumpernickel bread from scratch" with Julia Child just yelping about the great smell, or supermarkets having brown colored wonderbread mislabeled in a similar fashion, then is this a very good reason to scream FOUL and clarify the issue. Marta writes: how-to make a hot cocoa kit. HOW-TO MAKE A HOT COCOA KITby Destri of The Mother Huddle. Как приготовить сочиво. How to Make Krispy Kreme Doughnuts: 16 steps (with pictures)

Edit Article DoughnutsCreamy GlazeChocolate glaze Edited by Maluniu, Rojo Don Poho, Flickety, OhioMike and 60 others Everyone loves Krispy Kremes! Krispy Kreme donuts are served at fundraisers, breakfasts, and even to satisfy that sweet snack need. How to Make Vegan Black Bean Burgers: 9 steps (with pictures) Edit Article Edited by Michaelabrams01, KatherineP, Pratiksha, Thimmally and 15 others Black beans are a perfect substitute for the meat in a hamburger recipe because they're high in protein and have a great consistency for mashing together into patties. They also have an added benefit of being high in fiber and low in fat, which makes them both very nutritious and vegan friendly. Ad Steps. How to Make Vegan Peanut Butter Chocolate Bars: 11 steps (with pictures)

Tortilla + sourdough. A 100% whole grain hearth bread I'm proud of. As many of you know, I've been questing for a tasty, open crumb, 100% whole grain hearth bread for a long, long time now. This weekend, I finally achieved my goal. Nice open crumb, creamy texture, tangy and flavorful crumb, appealing slashes, crunchy crust. Here's how I made it, and, to be truthful, it was mostly on a whim. The day before, I'd made some whole wheat sourdough sandwich bread, and had about 80 grams of starter left over. I didn't have time, really, to feed it, so I popped it in the fridge figuring I'd do something with it later. Producing a Tender Crumb – Tartine Basic Country Bread.

But, first, the weather. Thunder, lightening and hail may not be a big deal to people in some localities. But in Northern California, they are rare as reliable weather-forecasting. Saturday, our morning coffee was interrupted by a crashing downpour of (admittedly small) hail. It went on for many minutes and accented our garden with glistening ice. Now, back to bread. Tartine Country Bread. Buckwheat Pancakes. Croissant. Time for me to do something a little bit different so I decided to do Croissants. A Sourdough from Quebec « Fermenting on the Brain. No Knead Bread - A Rustic Loaf! This recipe first appeared in the New York Times in November 2006. How to Make Kombucha Tea. Demo: Proving Bread. Pain de campagne.