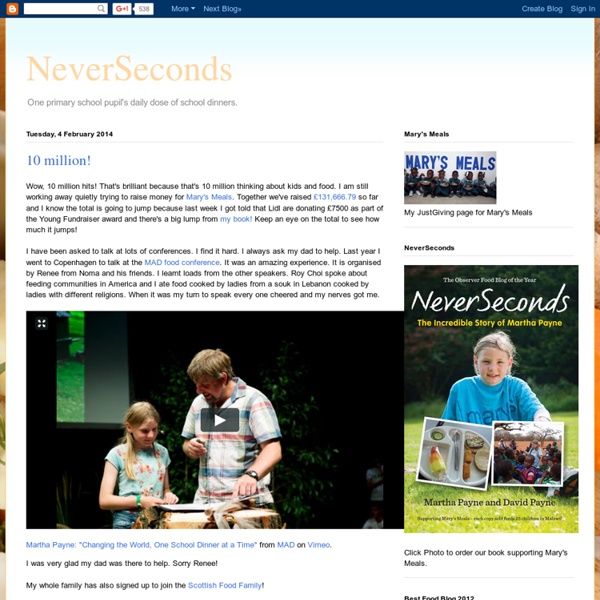 This is one of my favourite posts. I love all the different meals and how people dress and prepare them. I even guessed the winner! Thank you Doni. VEG Hello everyone.

feastoffiction's Channel Support the show! Check out Anthony:http;//www.twitter.com/smoshan­ RARE CANDY:1/4 cup of sugar1/8 tsp cream of tartar1/8 cup of water1/2 tsp citric acid1/4 t. lemon extractBlue food coloringPowdered sugarCandy ThermometerBlue candy foil wrap In a sauce pan combine sugar, water, and cream of tartar. Stir. Insert candy thermometer and heat until it reaches 300 degrees F (hard crack). The Top 15 Social Media Marketing Strategy Mistakes to Avoid Social media is the most popular online activity, so it makes perfect sense for businesses to want to tap into that audience to try and increase sales. Right now, more than 90 percent of businesses use social media in one form or another. But, simply opening an account or sending out some tweets is not enough to make social media platforms a viable and profitable part of a marketing strategy. By avoiding some basic missteps, many businesses have the ability to increase ROI and create more opportunities from social media accounts.

Greek Yogurt Souffle quite impressive straight out of the gate... light fluffy, delicate...perfect for a lovely Sunday brunch. serve right away for the warm sky high souffle effect... or "fallen" as a light, airy healthy and guilt-free cheesecake souffle. sometimes, most of the time , you just can't get the darn things to the table in time. not to worry if they fall. these are still quite impressive. i know your crazy head is saying "fallen=failure"... but just take a bite and you will see it is still light as air and "souffle-like". the first two photos are just minutes out of the oven. the photos below are about 1/2 an hour out. if you fill the ramekin to the first rim it should not sink any further than shown. get creative with your accessories... fresh berries, a blueberry coulis , ginger syrup , or warm and syrupy homemade jam? it's like eating a little vanilla cloud. a perfect individual fancy treat, but i could eat three so make a few extra.

Idiot CEO threatens to kill Donald Trump on Facebook, gets fired for it While tech giants from the likes of Apple, Microsoft and Facebook chose to play it safe when Donald Trump won the election, the CEO of San Diego-based cybersecurity firm PacketSled opted for a different approach – and publicly threatened to kill the newly elected Republican candidate on Facebook. Unfortunately, his brash and aggressive burst of frustration swiftly backfired when the series of threats aimed at the President-elect shortly made it to Reddit and eventually appeared on a number of media outlets, causing PacketSled to place the aggravated CEO on an administrative leave. “I’m going to kill the the president-elect,” Matt Harrigan wrote on his personal Facebook page. “[G]etting a sniper rifle and perching myself where it counts. Find a bedroom in the whitehouse that suits you motherfucker.

This is Pareidolia thepaisleyboyfriend: Pareidolia at its best. Humans have evolved a very sophisticated pattern-recognition system. Unfortunately, this can sometimes lead us astray; people often perceive patterns out of completely random input, especially when they are ‘primed’ by previous input. Traditional sweet scones Ingredients 225g/8oz self-raising flour Half a teaspoon of salt 55g/2oz cold butter, diced 30g/1oz caster sugar 150ml/5floz milk Method Preheat the oven to fan 200C and lightly oil a non-stick baking sheet Sift the flour and salt into a food processor. Add the butter, whiz to fine crumbs, and then tip the mixture into a bowl.