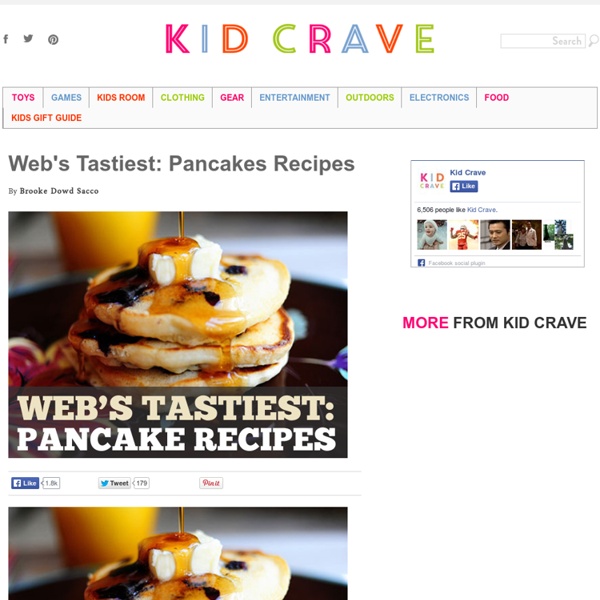 Everyone knows that breakfast is the most important meal of the day. So of course you want to get off to a good, healthy start. However, anyone with kids knows that some mornings are just too special to worry about a properly balanced meal. Spending time in the kitchen as a family, whipping up something absolutely decadent and definitely too sweet, is the stuff that memories are made of. The Web’s Tastiest Pancake Recipes are here to turn Saturday into Whattaday! Cinnamon Roll Pancakes Cinnamon rolls are fantastic all on their own, so infusing them with pancake goodness is a recipe for a heavenly morning. Lemon Blueberry Pancakes Lemon and blueberry are about as perfect a pair as Sunday morning and pancakes. Apple Pancakes An apple a day will keep the dentist away, so when you shred them and throw them into a pancake batter, you’re really making a healthy choice. Nutella Pancakes Need we say more? Apple Cider Doughnut Pancakes Cake Batter Pancakes Red Velvet Pancakes Gingerbread Pancakes

Cheesy Chicken, Bacon and Avocado Quesadillas What is it about bacon & avocado that I absolutely love?? And these quesadillas… with their buttery, crispy, heavenly tortilla shells… are seriously yum. Don’t let the green scare ya, avocados have a really delicious taste. I promise they’re not just thrown in to “healthify” this recipe!

untitled From the molten yolk and bacon crunch of a hand-held breakfast, to the gooey charm of grilled cheese for lunch, nothing matches the simple pleasures of well-made sandwiches. They're quick to assemble, infinitely adaptable, easy to eat, and immediately satisfying—the very definition of good food. The 25 sandwiches you're about to meet can be thrown together during the average basketball halftime or, with practice, during the seventh-inning stretch. Chocolate Chip Lava Cookies I am so in love with these darn chocolate lava cookies! What is it about a warm, gooey chocolate chip cookie stuffed with decadent, rich, melted chocolate that makes it so irresistible?? Especially when topped with vanilla ice cream. These are one of Kev’s favorite homemade treats, and he usually asks me to make them at least once a week.

School and Bailar « The life of an East Coast Kid September 13, 2009 by East Coast Kid Since my last blog i have done sooo much. I finished up my first week of school and now I have a bunch of new friends! Well I started by taking the bus in the morning which im not completely used to because back in CT I usually take a car to the metro-north train and then go to the SONO (South Norwalk) train station then from there I take a bus to school… crazy huh… well having to do a commute like that really messes up your mind. I only have to be outside waiting for the bus at seven o-clock… well I, having to wake up at five o-clock back in the states woke up at four forty-five just to make sure that I didn´t miss the bus… I know, crazy right? Whatever

Nutella Cinnamon Rolls May 10, 2011 | Print | E-mail | Filed under bread, nutella There are some days that I just lose my appetite. It might be because of my mood, or that nothing sounds good, or that I’m in a food rut again and need to spice things up a bit. When my appetite comes back though, what I’m inevitably craving is some sort of comfort food. Yesterday happened to be one of those days, and by the end of the day all I could think about was a warm cinnamon roll fresh from the oven. Fortunately, over the weekend I whipped up a batch of my go-to recipe…only this time, I halved the recipe so that I’d only get 3 pans of rolls instead of 6.

Two-Bite Strawberry Hand Pies This post comes to you from damply beautiful Seattle, Washington! Yes, kids, I am in Seattle for BlogHer Food 2012 and not just as an attendee, but I am speaking! I am nervous, but terribly excited, and ready to get the party started! The last month has been a CRAZY travel month for me. First, I went to Camp Blogaway, then I spent 6 days in Tokyo (expect a few Japanese themed recipes in the future – the place is life changing!) Cheeseburger Macaroni This delicious, incredibly cheesy dish is another one of our favorite weeknight dinners. It’s beefy, hearty and whips up in less than 20 minutes. Hope you love this one as much as we do! Start with one pound of lean hamburger meat, browned and drained.

Broccoli Cheese Soup: Panera Bread Copycat Recipe On Wednesday my sister and I volunteered to make the soup supper to go with the Advent service at church. Before you go thinking I'm some kind of charitable, goodhearted soul, I must tell you that the only reason that I do it is because I LOVE COOKING. In case you hadn't figured that out yet. The Web’s Best Sandwich Recipes Few foods allow for such creativity as the humble sandwich. By definition, it’s just bread and . . . stuff. PB & J on white?