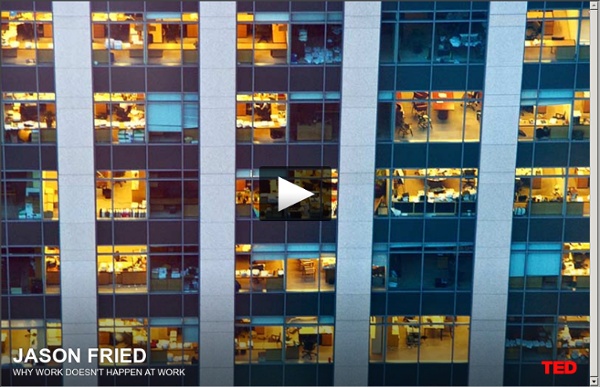 How to Make Things Happen This is an excerpt from Making Things Happen, my bestselling book on leading project teams. One myth of project management is certain people have an innate ability to do it well, and others do not. Whenever this myth came up in conversation with other project managers, I asked for an explanation —how to recognize it, categorize it, and, if possible, develop it in others. The only thing we usually identified—after considering many of the other topics covered in this book—is the ability to make things happen.

The 10 Best TED Talks of 2011 Watching videos online is usually considered fun, but generally a waste of time. Not so with TED videos, which are uniformly interesting, educational, inspiring, and enjoyable. If you haven't spent much time (or any) checking out TED videos, you should – and to help with that, I've compiled what seem to be the very best 10 TED videos of 2011. 10 talks on being creative Radio host Julie Burstein has found the perfect analogy for creativity—raku pottery. A Japanese art form in which molded clay is heated for 15 minutes and then dropped in sawdust which bursts into flames, what makes this pottery so beautiful is its imperfections and cracks. Burstein interviewed hundred of artists, writers, musicians and filmmakers for her book, Spark: How Creativity Works, and heard many of them describe their process in similar terms — that the best parts of their work came from embracing challenges, misfortunes and the things they simply couldn’t control. As Burstein explains in this talk given at TED2012, “I realized that creativity grows out of everyday experiences more often than you would think.” In this talk, Burstein identifies four lessons that creative people should embrace:

Ignore Details Early On We're crazy about details. The space between objectsThe perfect type leadingThe perfect colorThe perfect wordsFour lines of code instead of seven90% vs 89%760px vs 750px$39/month vs. $49/month Success and satisfaction are in the details. The Greatest Ever Economic Change 13 September 2012 The Greatest Ever Economic Change Professor Douglas McWilliams Introduction I am very grateful to Gresham College for allowing me to borrow the title of Mercers School Memorial Professor of Commerce for three years. I have had many illustrious predecessors and am immensely flattered to have the opportunity to follow in their footsteps. I have known Gresham College since my father was Lord Mayor twenty years ago and I worked with various institutions to support his Mayoral Theme ‘The City and Industry in Partnership.’

Alone Time 37signals is spread out over four cities and eight time zones. From Provo, Utah to Copenhagen, Denmark, the five of us are eight hours apart. One positive side effect of this eight hour difference is alone time. There are only about 4-5 hours during the day that we're all up and working together. At other times, the us team is sleeping while David, who's in Denmark, is working. The rest of the time, we're working while David is sleeping. Why You Need a Daily Prioritization Meeting We live in a culture of urgency, constantly throwing our emotional energy into the latest public scandal, emergency, or cat video. Most of us work in always-switched-on companies where everything feels urgent. Call backs, emails, and meetings are wrought with peak energy. How quickly do you expect a response to an email or changes to a report?

What multitasking does to our brains 5.8K Flares Filament.io 5.8K Flares × We all know this and have heard it hundreds of times. To work efficiently we have to single task. No multitasking. And yet, we let it slip. How to be Happier and More Productive by Avoiding 'Decision Fatigue' 6.1K Flares Filament.io 6.1K Flares × Let’s say it’s your birthday. First, happy birthday! 5 Things We Need For Sustainable Performance At Work We all want to perform well at work and live a fulfilling life. It all gets down to these two simple needs. If we take a minute to contemplate that a bit more, those two simple needs further get down to a few simple actions.

Rules that have no reason are just obstacles Productivity We all abide by many spoken and unspoken rules every day; while some of those rules have good reasons, plenty more have no reason and possibly a negative outcome. They stifle us, they rob us from imagination and they contain us. Why do we follow rules that stifle us? Well, most of the time because it’s the easy thing to do. How to destroy Programmer Productivity The following image about programmer productivity is making its rounds on the internet: As Homer Simpson might say, it’s funny because it’s true. I haven’t figured out the secret to being productive yet, largely because I have never been consistently productive.

5 Things You Should be Doing to Have an Insanely Productive Week A productive week depends largely on what you focus on every working day and how much time you allocate to activities that take up your time (i.e. busy work). Working harder does not necessarily mean you are being productive. There will always be a better way to complete that task.

I agreed with a lot of what Jason said, but not all. You? by jlmcarthur Jul 19

true, but also meeting ( unofficial ) are needed to keep the working place alive by simo88 Dec 4