Just How Small Is an Atom? - Jonathan Bergmann 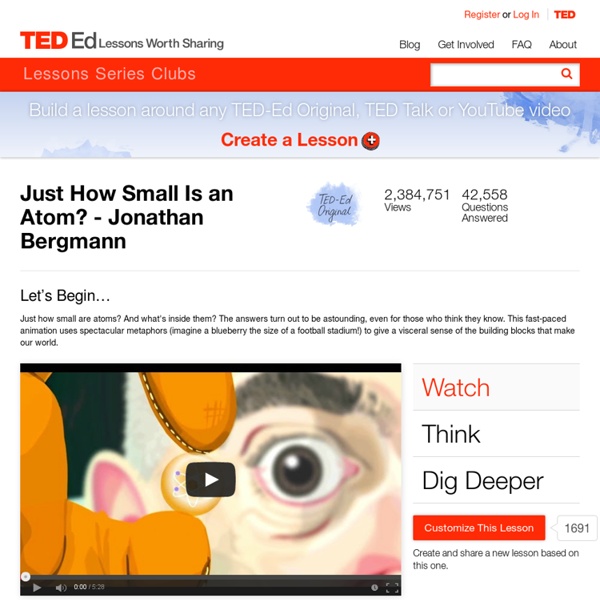 Whether we’re zooming in to the wavelength of a gamma ray or zooming out to the size of a galaxy, it can be difficult to wrap our heads around the big numbers we’re measuring—like nanometers (10-9meters) or gigameters (109). Take a look at these efforts to represent big numbers. What are the strengths of each? How would you represent a large number (like a gigameter)? Related:  TEDx - 2 • science made fun

12 Must-See TED Talks for Purposeful Women - Let Why Lead When my husband first started cueing TED talks for us, I’d try to convince him to go for Modern Family instead. But it wasn’t long before I caught on. A TED talk means you are twenty minutes away from feeling like you can do amazing things. I’ve spent a lot of time narrowing it down, and these are my twelve favorite TED talks for purposeful women. Happy viewing! 1. 2. 3. 4. 5. 6. 7. 8. 9. 10. 11. 12. Have any of these impacted you? Update: Visit my followup post for 5 honorable mentions. PS. Linked up with What I Learned Wednesday, Works for Me Wednesday, and Grace at Home. The Energy Story - Introduction Energy is one of the most fundamental parts of our universe. We use energy to do work. Energy lights our cities. Energy from the sun gives us light during the day. Everything we do is connected to energy in one form or another. Energy is defined as: "the ability to do work." When we eat, our bodies transform the energy stored in the food into energy to do work. Cars, planes, light bulbs, boats and machinery also transform energy into work. Work means moving something, lifting something, warming something, lighting something. There are many sources of energy. The forms of energy we will look at include: Electricity Biomass Energy - energy from plants Geothermal Energy Fossil Fuels - Coal, Oil and Natural Gas Hydro Power and Ocean Energy Nuclear Energy Solar Energy Wind Energy Transportation Energy We will also look at turbines and generators, at what electricity is, how energy is sent to users, and how we can decrease or conserve the energy we use.

Video: Can we end pandemics in our lifetime? By tracking social media, it turns out, we can get much better at recognizing pandemics early. Solving epidemics has been the goal of physician Larry Brilliant’s career — and the basis for his 2006 TED Prize wish, which he updated this year in a talk at TED2013, above. His wish called for an “International System for Total Early Disease Detection,” or InSTEDD, a project with the mantra “Early detection, early response” — which included, among other features, tracking stories on the web to watch for patterns that indicate an epidemic is about to break out. After winning the TED Prize, Brilliant founded InSTEDD, a nongovernmental, multilingual, worldwide digital surveillance system that monitors the web, global news and social media for phrases and patterns that may signal a brand-new pandemic. In this update, Brilliant shares new data that shows … it’s working.

The Photosynthesis Cycle" The Earth's atmosphere is mostly composed of nitrogen. Oxygen makes up just 21 percent of the air we breathe. Carbon dioxide, argon, ozone, water vapor and other gasses make up a tiny portion of it, as little as 1 percent. These gasses probably came from several processes as the Earth evolved and grew as a planet. But some scientists believe that the Earth's atmosphere would never have contained the oxygen we need without plants. Photosynthesis is a complex reaction. 6CO2 + 12H2O + Light -> C6H12O6 + 6O2+ 6H2O In other words, while we inhale oxygen and exhale carbon dioxide, plants inhale carbon dioxide and exhale oxygen. Without the sun to feed plants (and the plants to release oxygen), we might not have breathable air. Obviously, plants are important, but not just because they give us food to eat and oxygen to breathe.

The Ethyl-Poisoned Earth Thomas Midgley At the turn of the twentieth century, as the age of automobiles was afoot, the newfangled gasoline-powered internal combustion engine began to reach the limitations of the fuel that fed it. As higher-compression designs were tried, an engine-wrecking condition known as "knock" or "ping" would invariably develop. Though they didn't know it at the time, the noisy destruction was caused when the increased heat and pressure prompted the air/fuel mixture in the cylinder to detonate all at once as opposed to an orderly burn. In spite of this problem, there was a demand for high-compression designs since they provided increased horsepower and fuel efficiency. In 1921, after a long string of inadequate solutions, a clever but chronically catastrophic chemist named Thomas Midgley developed a fuel additive which eliminated ping problems while increasing fuel efficiency. With the guidance of their accidental discovery, Mr. Midgley in the laboratory As Mr. Clair Patterson

6 thinkers whose depressing ideas will make you feel better We are absurdly anxious about success, says popular philosopher Alain de Botton (TED Talk: Alain de Botton: A kinder, gentler philosophy of success). In his talk from 2009, he suggests that many of our modern values — like our sense of limitless possibility and upward growth — can actually lead us to stress harder about how well we’re doing. But the reverse can also be true, says de Botton. For TED, he’s put together this reading list of (mainly) pessimistic philosophers who have inspired his thinking about positivity. 1. The Complete Essays Michel de Montaigne “Montaigne likes to point out that philosophers don’t know everything, and that they would be a lot wiser if they laughed at themselves a little more. 2. “Seneca belonged to the Stoic school of philosophy, which is all about teaching you how to respond calmly to disaster. 3. “Schopenhauer is another great pessimist who makes you feel happier. 4. 5. 6.

The Earth and Beyond Welcome to The Earth and Beyond Hello, my name is Tim O'Brien. I'm an astronomer working at The University of Manchester's Jodrell Bank Observatory. As an astronomer my job is to try and understand how the universe works and my main interest is why some stars explode - more about this later! I also get to visit lots of schools and share amazing facts with children and teachers about the Sun, Earth and Moon, the stars and planets, and the Universe as we know it! Now, in the Children’s University, I can share the excitement with you. Exploding stars You may know the names of some patterns of stars (called constellations) such as Orion or the Great Bear. This picture shows Orion the Hunter and Taurus the Bull with the position of an exploded star known as the Crab Nebula. We're all made of stars Understanding why stars explode is very important because most of the chemical elements (carbon, oxygen, nitrogen and so on) were made inside stars and are spread out into space when they explode.

A Short History of Nearly Everything - Bill Bryson What does inequality do to our bodies? To our minds? What do a disease-fighting epidemiologist (retired) and an up-and-coming social psychologist have in common? They’re both fascinated by the unseen social problems hidden behind the word “inequality.” Beyond the lack of access to money and power — what does inequality do to us as human beings? Epidemiologist Richard Wilkinson (TED Talk: How economic inequality harms societies) spent his career studying chronic health problems — with the growing realization that most health issues are caused, or worsened, by poverty and inequality. In this freewheeling conversation, Wilkinson and Piff find their common ground — and go from there. Paul Piff: Richard, maybe we could begin with a description of where you started, and some of your basic findings and how that converges with mine. PP: Yours is some of the work that best shows how inequality shapes people’s individual lives. RW: Yes, it sounds like you got into the psycho-social effects of status and inequality from the beginning. PP: Yeah.