10 Ways You Should Never Describe Yourself 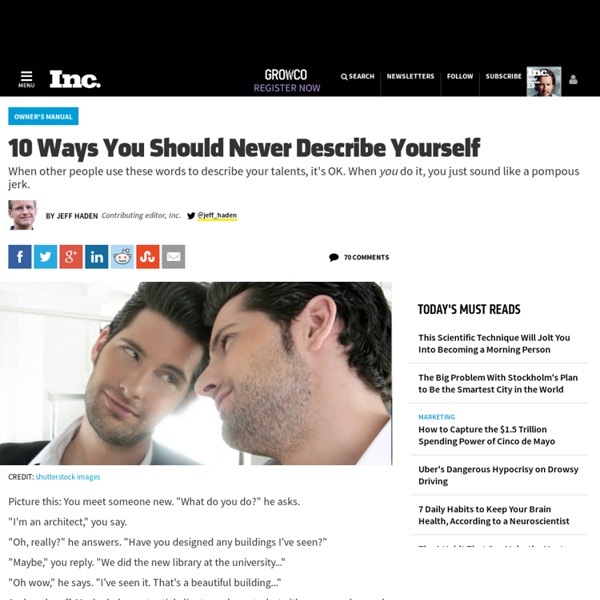 Picture this: You meet someone new. "What do you do?" he asks. "I'm an architect," you say. "Oh, really?" "Maybe," you reply. "Oh wow," he says. And you're off. You sound awesome. Now picture this: You meet someone new. "I'm a passionate, innovative, dynamic provider of architectural services who uses a collaborative approach to create and deliver outstanding customer experiences." And he's off, never to be seen again... because you sound like a pompous ass. Do you--whether on your website, or more likely on social media accounts--describe yourself differently than you do in person? Do you use hacky clichés and overblown superlatives and breathless adjectives? Do you write things about yourself you would never have the nerve to actually say? If so, it's time for a change. Here are some words that are great when used by other people to describe you, but you should never use to describe yourself: "Motivated." "Authority." If you have to say you're an authority, you aren't. "Global provider." "Guru."

How to Achieve Great Things: Tips From a Pixar Artist The CEO was scheduled to retire in a month, having announced his planned retirement five months earlier. He was consumed by how he would be remembered. "When people reflect on my accomplishments, I truly think my legacy will be..." he started to say. He continued on, but I had already tuned out. Anyone who references his own legacy without rolling his eyes or using air quotes is just a bit too full of himself. But we all will at some point think about how we want to be remembered. Hopefully, when that someday comes, it won't be too late. Recently Emma Coats, a Pixar storyboard artist, posted a list of 22 storytelling basics that apply just as well to life and business. I adapted a few principles you can start using today to make sure your life story turns out to be great: 1. Trying something easy and succeeding is satisfying in the moment, but ultimately fleeting. Growth is a result of the effort, not the success. 2. Only then will others will see you the way you see yourself. 3. 4. 5. 6. 7.

Business Plans Are a Waste of Time. Here's What to Do Instead If you're taking time to carefully perfect a business plan to help ensure your company's model is sound and that it will be a success--stop. That's the word from William Hsu, c0-founder and managing partner at start-up accelerator MuckerLab. Hsu, who's been both a successful entrepreneur and an executive at AT&T and eBay, says that starting a company is "a career for really irrational people. In all probability, whatever the idea is will fail. Building a reality distortion field is how entrepreneurs convince themselves and their employees that this is a good idea." With that in mind, he advises: 1. A great team trumps a great idea every time, Hsu says. In either case, having great team members can fill in any areas where the entrepreneur lacks strength, he says. 2. "Whatever hypothesis you have about the market, it's probably wrong by definition," he says. Then, he says, pivot and reconfigure on the basis of that market response. 3. Does that mean you should never look ahead?

get a job nowKeppie Careers Identifying what employers want and making the case to show why you’re a fit is one of the most challenging things for job seekers. If you haven’t looked for a job in a while, it may seem like what employers want changed a lot since the last time you looked for work. You may need some tips to help you get a job now. Years ago, everyone seemed to prefer to hire Jacks-of-all trades—in other words, people who could do a little of everything. According to Kevin W. In a competitive market, job seekers should consider honing in on their specialties and applying for positions where those targeted skills will be valued. Consider these tips to help make your business case: Be specific. Think about the specifics that make you different. Fill in the gaps. Use social media. Read the full post on my U.S. Related Posts: Enjoy this article? facebook twitter linkedin email sharethis Article by Miriam Salpeter Are you a job seeker or small business owner?

Why Face-To-Face Meetings Are Overrated You know the feeling. Everyone’s sitting around a table, ideas are building on ideas, and intellectual sparks are lighting up the room. It’s tempting to think that this kind of magic only happens when people can see and touch each other. Let’s assume for a second that that’s true: Breakthrough ideas only happen when people are interacting face-to-face. Given that, you’re only going to frustrate yourself and everyone else if you summon the brain trust too frequently for those "a-ha!" This is why at 37signals we don’t meet in person all that often. But what about those spur-of-the-moment rays of brilliance? By rationing in-person meetings, their stature is elevated to that of a rare treat. Reprinted from the book Remote: Office Not Required by Jason Fried and David Heinemeier Hansson.

Job Interviewing 101: How to Succeed in Different Situations | Wetfeet Blog Did you know the average employer may receive more than 100 applications per job opening? In addition, even if an applicant does land an interview, it can be difficult to navigate through the process since every interviewer and interview situation is different. Whether you’re participating in a phone or face-to-face interview or an interview that involves testing of some sort, it’s a good idea to know what to expect on the day and how to handle yourself appropriately. So, how can job seekers make sure they are prepared for each interview situation and ensure they will ultimately come out on top and unfazed? This infographic, compiled by Interview Success Formula, illustrates how job seekers can read the most common types of interviewers and how to succeed in the process. Some takeaways to note include: The average duration of an interview is 40 minutes60% of managers conduct video interviews34% of U.S. workers say they have a younger boss17% didn’t believe the employer was knowledgeable

How the Rich Get Rich John D. Rockefeller, America's first billionaire, said, "If your only goal is to become rich, you'll never achieve it." Easy for him to say, but his point is well taken: If the only thing you care about is making money, no matter how much money you make it will never be enough. Still, even though we all define and calculate success differently, most of us would like wealth to factor into our equations. To find out how, check out the 400 Individual Tax Returns Reporting the Largest Adjusted Gross Incomes, an annual report issued by the IRS. (The latest report is for 2009, which to you and me was a long time ago but to the government is really, really up to date.) In 2009 it took $77.4 million in adjusted gross income to make the top 400. A mere $77.4 million only got you in, though; the average earnings were $202.4 million, a lot of money but well down from the $334.8 million average in 2007. Where it gets interesting is how the top 400 made their money: Obvious conclusions:

7 Key Habits of Super Networkers The ability to network successfully can be one of the greatest assets in business. It allows some people to find incredible opportunities, while others just watch from the sidelines. Effective networking isn't a result of luck -- it requires hard work and persistence. What does it take to be a super networker? Here are seven of the most important habits to develop: 1. Related: Can't Spare the Time to Network? Recent Articles From Lewis Howes 2. 3. For example, some entrepreneurs pride themselves on working 16-hour days and doing whatever it takes, while others focus on being strategic and waiting for the right opportunities to open up. 4. Related: 7 Tips For Building a 'Power Network' on LinkedIn 5. 6. 7. Related: 5 Ways to Use Your Network to Grow Your Business The author is an Entrepreneur contributor.

How to Be Way More Productive Wake Up With More Energy Many people feel tired in the morning not because they didn't sleep enough but because they have low blood sugar. You can minimize this by consuming a tablespoon or two of unsweetened almond butter before you go to sleep. It's a very simple way to stabilize your blood sugar. (I've tested this by having a continuous glucose monitor implanted in my side.) Double Your Reading Speed in Five Minutes Write down a sentence, any sentence that has eight to 12 words and fills a single line on a page or screen. Clear Your Inbox in Half the Time The only consistent way to get to inbox zero is to respond to fewer emails, because each response breeds more email. The first is five.sentenc.es, which gives you a footer that says, "Why is this email five sentences or less?" Boomerang is an extension for Gmail. The last tool is emailga.me, which forces you to go through your email sequentially without an inbox view, with timers and other gamifications.

Steve Jobs's Tips for Hiring Your A-Team In his book, Leading Apple with Steve Jobs, author and former Apple senior vice president Jay Elliot details Jobs's approach to motivating people, pursuing excellence and forming innovative teams. In this edited excerpt, Elliot, who was personally hired by Jobs, describes his former boss's strategies for hiring A-list players. For their book In the Company of Giants, authors Rama Dev Jager and Rafael Ortiz asked Steve Jobs about putting together a team. He told them, "When you're in a startup, the first 10 people will determine whether the company succeeds or not." Want to recruit and hire highly talented innovators? Related: How to Create Your Own Dream Team in Business Define the requirements but don't be rigid. Steve always had a very clear grasp of the need. That's what happened with Susan Kare. Who was going to dream up those icons, and the other parts of a pleasing and easy-to-use onscreen design? Don't limit your search to the usual methods.

6 Habits of Remarkably Likable People When you meet someone, after, "What do you do?" you're out of things to say. You suck at small talk, and those first five minutes are tough because you're a little shy and a little insecure. But you want to make a good impression. You want people to genuinely like you. Here's how remarkably likeable people do it: They lose the power pose. I know: Your parents taught you to stand tall, square your shoulders, stride purposefully forward, drop your voice a couple of registers, and shake hands with a firm grip. It's great to display nonverbal self-confidence, but go too far and it seems like you're trying to establish your importance. No matter how big a deal you are you pale in comparison to say, oh, Nelson Mandela. Clinton takes a step forward (avoiding the "you must come to me" power move); Mandela steps forward with a smile and bends slightly forward as if, ever so slightly, to bow (a clear sign of deference and respect in nearly every culture); Clinton does the same. You meet someone.

3 Common Red Flags on Resumes Most resumes are not terrible-- but they’re nothing special either. Here are three resume faux pas to avoid (whether you're applying or hiring). 1. No results. Jobseekers are often diligent about explaining their responsibilities in great detail, says Rajat Taneja, executive vice president and chief technology officer at Electronic Art, in a recent LinkedIn post, but resumes should highlight results. He wrote: The more quantitative, the easier for a screener or hiring manager to understand and select them for the next discussion. 2. “Candidates should put on the hiring manager’s hat and look at their own resumes with this filter and then proactively address any of these issues in a clear and unambiguous way,” Taneja wrote. 3. "It's clear that some people can’t—or won’t—proofread,” wrote Leslie Ayres, aka The Job Search Guru, in a recent blog post.