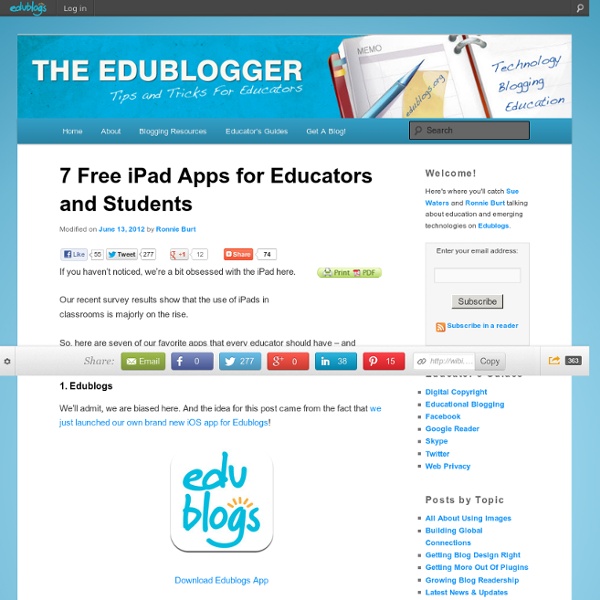 If you haven’t noticed, we’re a bit obsessed with the iPad here. Our recent survey results show that the use of iPads in classrooms is majorly on the rise. So, here are seven of our favorite apps that every educator should have – and students too! 1. Edublogs We’ll admit, we are biased here. Download Edublogs App Blogging from the iPad (and iPhone) has never been easier. 2. Symbaloo makes it easy to organize all of your favorite websites into one simple and clickable dashboard. Download Symbaloo App With their new app, your bookmarks and favorite links are always with you. 3. This has been my favorite app for a few months now. Download Paper by 53 App Create blank notebooks and write whatever you’d like. 4. A little more powerful than Paper by FiftyThree – and geared more towards typing text. Download Evernote App With Evernote you will never lose a thought or idea. 5. WatchKnowLearn.org is our favorite place on the web for educational videos. Download WatchKnow App 6. Download Dictionary.com App

Symbaloo Goes Mobile I’ve shared before how I use Symbaloo as a startup page for my computers. Rather than using bookmarks, I like the graphical approach that it offers to get to places I frequent daily. Very quickly. Symbaloo also allows you to share your webmix with others and you can grab what others are sharing and add as a tab to your own instance. This is my own information portal. Yesterday, Symbaloo released an iOS / Android application that truly lets you take it all with you. Hopefully, there is a native iPad application in the works. At the bottom of the screen, you can share your webmix, search for others, or just share with friends. So, in terms of my own productivity, I really like this. At one time, I maintained a Student Reference Portal on a website. With the advent of 1:1 iPad / iPod / iPhone / Android / Mobile / BYO# programs, I see Symbaloo as offering an excellent resource. Like this: Like Loading... Related Having it all In "application" Symbaloo - Before and After In "Computers"

iPad Note Taking: iPad/iPhone Apps AppGuide Notes are, by definition, snippets of information— more like a fragment than a whole sentence. Note taking apps, then, are apps designed to help you capture thoughts or ideas quickly and easily, not edit or compose long form documents like your favorite text editor or write daily journal entries. There are a large number of apps that could potentially fall under the umbrella of “note-taking”; however, this AppGuide is for apps devoted to text notes, not text editors (e.g., IAWriter, Pages, or DocumentsToGo), handwriting apps (we covered those in a different AppGuide), or apps designed for use with Dropbox (those were also covered in a separate AppGuide). The remaining apps were evaluated based on their connectivity, speed, organizational options, export options, and reliability. Free Simplenote by Codality Simplenote lives up to its name as a simple, easy to use note taking app that just works.

15 Favorite iPad Apps As Selected By Teachers Out of 125 responses from teachers indicating their top 3 apps, these are the apps that were listed most often. Over the last few weeks, we ran a survey asking teachers to tell us about two or three of their favorite iPad apps that they use in an education-related context. Today we share the apps that were listed most often, and include some feedback from teachers regarding why they like them so much. As it turns out, free apps really outweighed paid apps in our survey responses. First, we list the Favorite FREE iPads Apps that teachers indicated they use in their roles are educators: EvernoteDropboxNeu.NotesScreen ChompTED VideosEduCreationsiBooksSkitchTwitterZiteScience360 Following is a little information about each of these apps, and some feedback on why teachers like them. 1. - “It makes my life simpler! - “I don’t even know where to start. - “I save all kinds of resources for myself and to share. 2. - “It allows me to keep all my files in one secure place. 3. 4. 5. 6. 8. 9. 10. 11.

Top 60 best free iPad apps 2012 On comparing iPad apps with iPhone equivalents, one thing rapidly becomes clear: apps for Apple's tablet are pricier. Many of the best free iPhone apps cost money in their iPad incarnations, and the quality level of what's still free is often ropey. But among the dross lie rare gems – iPad apps that are so good you can't believe they're still free. Of those we unearthed, here is our pick of the best free iPad apps. Note that apps marked 'universal' will run on your iPad and iPhone, optimising themselves accordingly. For a mix of free and paid apps, check out our amazing Best iPad apps chart. 1. Annoyingly, some free iPad weather apps refuse to believe that the UK has any weather (or that the country exists), so AccuWeather gets props for merely working. 2. The social networking giant has gone back-and-forth with its mobile apps, finally settling on this smart, native implementation. 3. 4. 5. 6. 7. 8. Dropbox is a great service for syncing documents across multiple devices. 9. 10. 11. 13.

35 Great iPad Apps for Designers, Geeks and Creative Individuals - Creative Can Creative Can Because of its mobility and large array of useful apps available, iPad has become very popular these days, and this trend is not likely to end anytime soon. With the capability that almost rivals desktops, iPads, have also become the gadget of choice of designers while on the go. With the help of some iPad apps, designers, geeks and creative individuals can now do their job while away from their workstations. Here, we are showcasing some of the great iPad apps for designers and other creatives to use while on the go. You will find here apps for mock-ups, sketching, social media, web development and etc. that you can use to accomplish varied tasks. Wireframing, Mind Mapping and Productivity Apps iMockups for iPad iMockups for iPad is the premiere mobile wireframing and mockup app for your web, iPhone and iPad projects. OmniGraffle Need to create a quick diagram, process chart, page layout, website wireframe, or graphic design? MindNode Dropbox Air Display Moodboard Evernote Ignition iDesign Draft

12 Museum Apps from around the World The Vatican Museums: $6.99 AU The Vatican Museums begin just beyond a massive bronze door that, like magic, takes you out of Italy and into the smallest country in the world: the Vatican. This is the start of a mysterious and fascinating trip: a voyage across more than 20 centuries of creativity through which art and history intertwine. The most sought-after stop on the Vatican Museum trail is without doubt the Sistine Chapel however every room is rich in history and precious examples of life from every era. Guggenheim Bilbao: $3.99 AU Discover the Guggenheim Museum Bilbao Collection in just one App. Australia’s oldest and most distinguished public art museum is based in Melbourne. Love Art: National Gallery: $2.99 AU The National Gallery in London houses one of the greatest collections of Western European painting in the world. MOMA: - FREE The Museum of Modern Art in New York is home to the world's finest collection of modern and contemporary art.

How One App Uses Digital to Empower Education The Spark of Genius Series highlights a unique feature of startups and is made possible by Microsoft BizSpark. If you would like to have your startup considered for inclusion, please see the details here. Name: Three Ring Quick Pitch: Create and share digital portfolios of students’ work quickly and easily. Genius Idea: Three Ring allows teachers and students to digitize student work by snapping pictures or videos with their mobile or tablet devices. Crumpled assignments drifting to the bottom of students’ backpacks may soon be an experience of the past. With a smartphone or a tablet, the app allows teachers to take a photo or video recording of student work and then seamlessly view and share the work online. Three Ring is already in the hands of almost 2,000 teachers in New York, Delaware and Maryland. Three friends — Alec Turnbull, Michael Lindsay and Steve Silvius — who share a passion for education reform joined to create Three Ring. Image courtesy of Flickr, flickingerbrad

Apps in the Elementary Classroom One area that I have not written much about on this blog is educational apps. This is mostly due to the fact that my school has one first generation iPad and two iPod Touches for the entire school. We also ban cell phones and other electronic devices, so these are not available for use in the classroom unless the teachers specifically plan for the kids to use them for a lesson or activity, hand them out to the kids and collect them at the end of the lesson. I won't pretend to be an expert on apps in the classroom, which is why I haven't covered their use here. However, with more and more schools investing in iPad carts, iPods and Bring Your Own Device (BYOD) policies, it's an important topic. I don't want this to be one of those "top 10 apps" posts, so I will share a few thoughts about apps in the elementary classroom, some implementation ideas for certain apps, and an obligatory list of resources. What is the Role of Apps in the Classroom? Cost Some Resources for Educational Apps