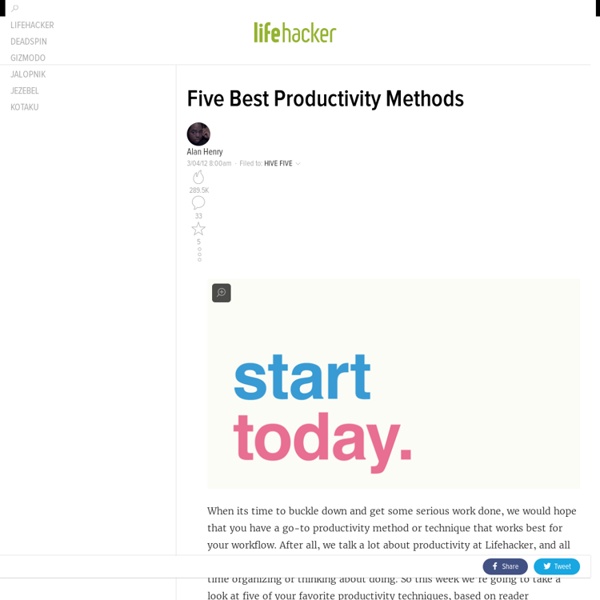 When its time to buckle down and get some serious work done, we would hope that you have a go-to productivity method or technique that works best for your workflow. After all, we talk a lot about productivity at Lifehacker, and all of the different techniques you can use to spend more time doing, and less time organizing or thinking about doing. So this week we're going to take a look at five of your favorite productivity techniques, based on reader nominations. P Earlier in the week we asked you what productivity method you used when it was time to get down to business. You responded with a wide array of techniques, mashed-up and remixed productivity methods, and unfortunately we can't look at them all. The poll is closed and the votes are counted. The Pomodoro TechniqueP The Pomodoro Technique was created by Francesco Cirillo back in the early 90s as a way to harness the power of focused work and frequent breaks to be more productive. Getting Things DoneP The Action MethodP

Benefits of Simplicity to Productivity Simplicity is often perceived as boring, unattractive and unremarkable. Majority of people want something striking and complicated. But as Leonardo da Vinci has said, Getting Real Here are the 16 chapters and 91 essays that make up the book. Introduction chapter 1 What is Getting Real?A smaller, faster, better way to build software About 37signalsOur small team creates simple, focused software Caveats, disclaimers, and other preemptive strikesResponses to some complaints we hear The Starting Line chapter 2 10 Foolproof Tips for Overcoming Procrastination …and the very best tip is the easiest (hint: it’s the first one). Procrastination has been extensively studied by psychologists, probably because they have some world-class procrastinators close at hand: students. Students don’t have a monopoly on wasting time, though, almost everyone procrastinates now and then. The difference is that some people learn effective strategies for dealing with it and get some stuff done; others never do.

Study Hacks - Decoding Patterns of Success - Cal Newport On Sam Harris and Stephen Fry’s Meditation Debate February 19th, 2019 · 44 comments A few weeks ago, on his podcast, Sam Harris interviewed the actor and comedian Stephen Fry. How Keeping Things Simple Makes You A Productive Entrepreneur Running your own business is a complicated affair; making it successful can be even more complicated. If you don’t have a plan to be productive and keep focused, the details that you are responsible for can quickly overwhelm you. In fact, one of the biggest failings of new entrepreneurs is to get so caught up in an avalanche of unimportant details that more important priorities get left unattended on the table.

Why To-Do Lists Don't Work and Done Lists Do If you’re only using a to-do list, there’s a good chance you’re making yourself less productive. It’s something that took me quite a while to understand. There’s a simple but breathtakingly powerful fix to your to-do list — keep a done list. 5 Unusual Ways to Start Working Smarter, Not Harder, Backed by Science One of the things I love about the culture at Buffer is the emphasis on working smarter, not harder. Our team is all about getting plenty of sleep, exercise and recreation time so that our time spent working is as productive as it can be. Working harder can be an easy habit to slip into, though. Sometimes it’s hard to switch off at the end of the day, or to take time out on the weekend and stop thinking about work. With a startup of my own to run, I find this even harder to manage lately.

The Art of Stealth Studying: How To Earn a 4.0 With Only 1.0 Hours of Work October 3rd, 2007 · 99 comments Welcome new readers. Study Hacks is a blog dedicated to productivity hacks for students. If you like this article, you might also like these posts on how as an MIT grad student I never work past 5 PM, the difference between work and pseudo-work, and the key to becoming both impressive and relaxed. If you prefer more technical advice, consider my article on using a Monotypic e-mail inbox, this survey of effective student time management techniques, this story of a student who got a 4.0 with 0.0 notes, and these instructions for building a paper research database. The Secret Art of Stealth Studying