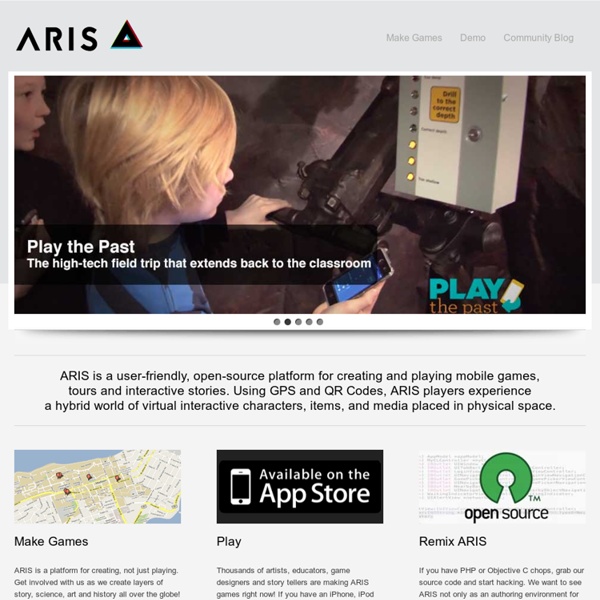 ARIS is a user-friendly, open-source platform for creating and playing mobile games, tours and interactive stories. Using GPS and QR Codes, ARIS players experience a hybrid world of virtual interactive characters, items, and media placed in physical space. Make Games ARIS is a platform for creating, not just playing. Get involved with us as we create layers of story, science, art and history all over the globe! Launch the Editor Now!

Environmental & Social Awareness Games The following is a list of environmental & social issue games. Most of these green games are suited for people of all ages, but some games contain themes geared toward adult issues. Bacteria Salad - Food safety game where you have to grow tomatoes or spinach without making people sick from e. coli or salmonella. Food Import Folly – Become the FDA and prevent contaminated food goods from entering the USA. vs. EEBLE ARG Walkthrough - North American Simulation and Gaming Association At the opening keynote of NASAGA 2012: Boldly Launching into 50 More Years of Games-Based Learning, Greg Koeser, Chris Saeger, Scott Nicholson and myself led an alternate reality game (ARG) which flipped the keynote from a sit-and-listen experience into a shared experience which had new and established NASAGAns interacting with each other from the first. This activity, however, was the culminating experience of a longer game that was played by NASAGA neophytes before the conference started. The game not only allowed the new NASAGAns to make connections with each other and feel welcomed to NASAGA, it also helped them get a feel for what NASAGA is, and isn't! In order to allow everyone to experience the entirety of the game, we have put together the following walkthrough.

Proof It! - A Fun Proofreading Game at Portland Proof Begin Game! proof-it The speaker called out, "/Ladys/Ladies/, choose your partner for the next dance!"!@#$@!$%^%$All of my /freinds/friends/ think that I have strange ideas about politics.!@#$@! New NASA app brings spacecraft to life in 3D NASA is no stranger to 3D. It has done some impressive CGI trips into galaxies and nebulae, and of course it has offered some stunning 3D images from the Mars spacecraft. NASA has just released a free iPad and iPhone app called Spacecraft 3D. Here's how it works. You launch the app and then print out a target that you put on your desk or a table. The target allows the app to construct a spacecraft that you can see in three dimensions as your walk around it or change your elevation.

Which Word Game - Pick the right word to fit the context I * to go to a private school, but I don't any more.!@#$@! "Used to" is the correct phrase. Your IF Competition Voting Page 1st place Andromeda Apocalypse Marco Innocenti Floating in space on a strange vessel, sole survivor of a world... and maybe of the entire human race, Ektor Mastiff must find a way through the cosmos, on a voyage that can change the history of mankind forever. ESL Interactive Fun Games for Classroom Practice ESL Powerpoint (PPT) Games If you are the type of person who prefers to have games on powerpoint or as printable handouts, we have been thinking of you. We offer board games, powerpoint games and more for the classroom and one to one teaching. They have made my lessons fun and I have no doubt yours will be fun too. Added to the good news are the templates we offer that you can use to create customized games for your classroom and teaching.

Edupunk Edupunk is a do it yourself (DIY) attitude to teaching and learning practices.[1][2] Tom Kuntz described edupunk as "an approach to teaching that avoids mainstream tools like PowerPoint and Blackboard, and instead aims to bring the rebellious attitude and D.I.Y. ethos of ’70s bands like The Clash to the classroom."[3] Many instructional applications can be described as DIY education or Edupunk. Jim Groom as "poster boy" for edupunk The term was first used on May 25, 2008 by Jim Groom in his blog,[4] and covered less than a week later in the Chronicle of Higher Education.[1] Stephen Downes, an online education theorist and an editor for the International Journal of Instructional Technology and Distance Learning, noted that "the concept of Edupunk has totally caught wind, spreading through the blogosphere like wildfire".[5]

Minecraft PE Okay, so I have a confession to make. I have never seen Minecraft before (I've heard about it, but I must have been stuck under a rock for the past 10 years because I have never looked into it until today). Wow, I feel so relieved to get that off my chest. So in researching about the game I came across Jacob (a six year old playing the game) and his parents taped him playing Minecraft: