FURTHER MATHS. F is for Fractal. Medieval grammarians were obsessed with etymology because (according to a recent review in the London Review of Books[1]) the study of word origins ‘perfectly expresses the medieval conviction that language is a comprehensive, fully rational system, in which any part may be logically derived from the whole – just as “logic” itself derives from Logos, the all-creating word’. M is for Mind. Words come out of the mouth and go into the ear. 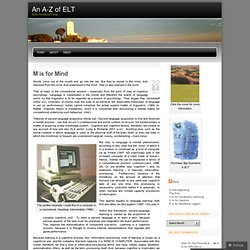 But they’re stored in the mind. And retrieved from the mind. And understood in the mind. G is for Grammar syllabus. A hobby-horse of mine, I know, but I thought I’d make a video this time, rather than write about it all over again. 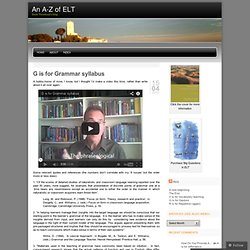 Some relevant quotes and references (the numbers don’t correlate with my ’8 issues’ but the order more or less does): 1. “Of the scores of detailed studies of naturalistic and classroom language learning reported over the past 30 years, none suggest, for example, that presentation of discrete points of grammar one at a time bears any resemblance except an accidental one to either the order or the manner in which naturalistic or classroom acquirers learn those item”. Long, M. and Robinson, P. (1998) ‘Focus on form: Theory, research and practice’, in Doughty, C., and Williams, J. (eds.) 2. O is for Othering. G is for Gossip. The other week I posted the following ‘status update’ on Facebook: “The figure of 150 seems to represent the maximum number of individuals with whom we can have a genuinely social relationship, the kind of relationship that goes with knowing who they are and how they relate to us.” 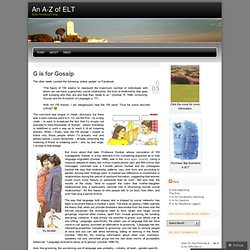 P is for Postmodern method. This comes from the teacher’s guide to a well-known coursebook series: “By the end of Level 1, students will have learnt to express themselves simply but correctly in the present, past and future…” And pigs will fly. 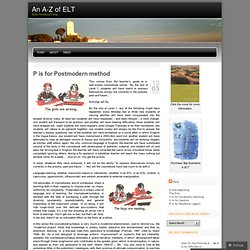 In short, whatever they have achieved, it will not be the ability “to express themselves simply but correctly in the present, past and future…”. Nor will the coursebook have had much to do with it. H is for Holistic. I took delivery of two books last week, both of which make liberal use of the term holistic. 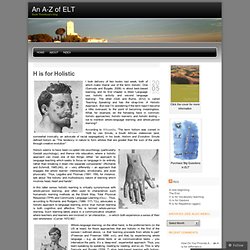 T is for Teacher development. This is a summary of the keynote talk I gave yesterday at the IATEFL Learning Technologies and Teacher Development Joint SIG Conference, titled With or Without Technology, held at Yeditepe University, Istanbul this weekend. 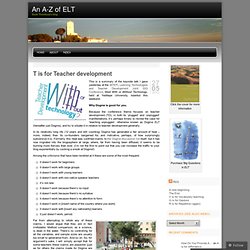 Why Dogme is good for you. Because the conference theme focuses on teacher development (TD), in both its ‘plugged’ and ‘unplugged’ manifestations, it’s perhaps timely to review the case for ‘teaching unplugged’, otherwise known as Dogme ELT (hereafter just Dogme), and try to situate it in relation to teacher development generally. In its relatively long life (12 years and still counting) Dogme has generated a fair amount of heat – more, indeed, than its co-founders bargained for, and indicative, perhaps, of how surprisingly subversive it is. Formerly, this heat was confined mainly to the Dogme discussion list itself, but it has now migrated into the blogosphere at large, where, far from having been diffused, it seems to be burning more fiercely than ever. C is for Critical Pedagogy. Does a coursebook text about global warming, plus a few discussion questions, constitute ‘a critical approach’? 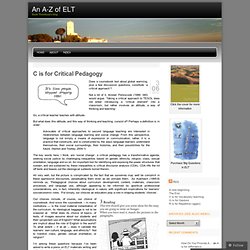 Not a bit of it, Alistair Pennycook (1999: 340) would argue. ‘Taking a critical approach to TESOL does not entail introducing a “critical element” into a classroom, but rather involves an attitude, a way of thinking and teaching’. So, a critical teacher teaches with attitude. S is for Silence. In Teaching Unplugged (Meddings and Thornbury, 2009) we have an activity called ‘The Sounds of Silence’, whereby the class simply listen in silence for one minute to whatever’s going on around them (open the windows or the door, if possible) and then share what they have heard. 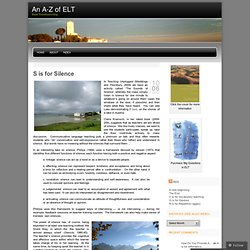 You can see Luke demonstrating it here, on the shores of a lake in Austria. Claire Kramsch, in her latest book (2009: 209), suggests that as teachers we are afraid of silence: ‘We like lively classes, we want to see the students participate, speak up, take the floor, contribute actively to class discussion. Communicative language teaching puts a premium on talk and thus often rewards students who “do” conversation and self-expression rather than those who reflect and understand in silence.

Blogging resumes. A is for Accommodation. You may well have seen this YouTube clip a month or so ago: British footballer Joey Barton is interviewed in France not long after having debuted for the Marseille football club. 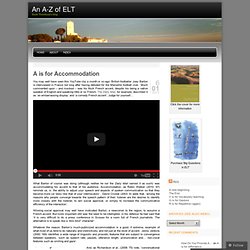 Much commented upon – and mocked – was his thick French accent, despite his being a native speaker of English and speaking little or no French. The Daily Mail, for example, described it as ‘an embarrassing display’ and ‘a comedy French accent’. Judge for yourself… What Barton of course was doing (although neither he nor the Daily Mail named it as such) was accommodating his accent to that of his audience. T is for Transmission. “I do agree that it takes multiple aspects of learning L2 with frequent reviews for learners to absorb information”. So wrote one of my online MA students on a discussion board last semester. The course I was teaching was on second language acquisition, and the tasks that they were asked to engage with focused on their reading (of the core texts), their teaching experience, and their experience themselves as second language learners.

What I started to notice (and then couldn’t stop noticing!) Was the persistence of the metaphor of language learning being like absorbing information. In one form or another, it came up again and again. 1. (Note that the students used the ‘absorb information’ metaphor to describe, not just language teaching, but their own experience of second language learning). P is for Pecha Kucha. C is for Contrastive analysis. An article in the latest Applied Linguistics (Scheffler 2012) makes a robust defence of some discredited classroom practices, including the use of translation.

While lamenting the lack of research into the effectiveness of translation, Scheffler reports a couple of studies that suggest that learners exposed to cross-linguistic comparison (also called contrastive metalinguistic input) out-perform those who have had grammar presented to them solely in the target language. The author concludes that ‘teachers who resisted the ban on [translation] in the classroom may have known what they were doing’ (p. 606).

M is for Monolingualism. Check out the banner that now adorns the town hall in our village. It reads ‘Un país per tots. L’escola en català’. Roughly: ‘A country for everybody. Schooling in Catalan’. Given that Catalonia is a multilingual region, with a population almost evenly divided between those whose mother tongue is Catalan and those whose mother tongue is Spanish (not to mention a host of minority languages including Urdu, Arabic, Mandarin and Romanian), the slogan has a kind of topsy-turvy logic that George Orwell would have appreciated. On a less felicitous note, the slogan echoes the rhetoric of the ‘English Only’ movement in the United States. A common language benefits a country and its people. O is for Outcomes. New campus, American University, Cairo I have to say at the outset that I have an almost pathological horror of testing and assessment.

All my worst teaching and teacher training experiences relate directly to issues of assessment. I don’t mean assessment of me (although negative assessments of my capacity to teach may well have resulted from my incapacity to ‘do’ assessment effectively). I mean my assessment of my students. Scott Thornbury. A language teacher tries to crank up his Spanish.